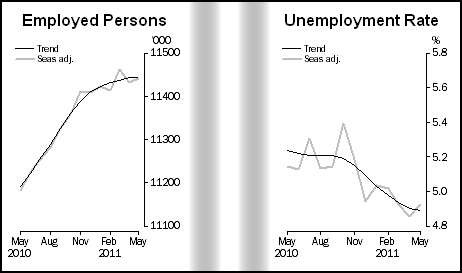 Hardly galloping back to work.

The employment revival has gone into pause mode.

The government should refer its RSPT campaign to its advertising committee regardless of any "exemption". Meanwhile, the lies of the anti-RSPT campaign continue.

What would Faulkner do?

John Faulkner’s shift to Defence was a turning point in this Government’s approach to accountability. The government has been backsliding ever since Joe Ludwig replaced him, writes Bernard Keane.

Comfort women, childrens’ sun hats, the Macksville Bridge, koala colonies and television for the blind. These were the sorts of questions asked at last night’s Community Cabinet, held in the assembly hall at Sydney’s Epping Boys High School.

Government advertising will now be reviewed independently following a review, hopefully providing more scrutiny than the Auditor-General was ever able to, writes Stephen Bartos.

The Australian went back over a decade of returns from Labor Holdings Pty Ltd and concluded that this secretive Queensland investment arm has pumped $25 million into the ALP’s federal and state campaigns since 2000.

Expect some drama as the Freedom of Information reform Bill is debated in federal parliament, since an amendment that would fatally undermine the move to more open government has been slipped in.

300,000 disenfranchised by our voting system

The government does seem to make an effort to elicit actual discussion in their government papers, and the new Electoral Reform Green Paper is a perfect example.

There are 8 articles in Joe Ludwig