The agreement that will make or break the ALP

This is the document that will make or break the Labor Party, as it heads towards the “unlosable” election due in 2019 or this year.

Crikey can reveal the new Centre Unity-Industrial Left agreement between the breakaway faction calling itself the Industrial Left (IL), led by the CFMEU and the Rail, Tram and Bus Union, and part of the Right regrouped as Centre Unity (CU), dominated by the “Mods” faction of Victorian upper-house member Adem Somyurek, and drawing in the Australian Workers’ Union, the Transport Workers Union and others.

The document is circulating among key factional and union players, with the claim that the new arrangement has, or will soon, sign up former Stability Pact heavies such as the Shop, Distributive and Allied Employees Association and, the former “Shortcon” factional leadership (now simply the “Cons” and “led” by Richard Marles — Baldrick to Stephen Conroy’s Blackadder).

Opponents say that is bulldust, and that the new agreement has only 32% support heading towards Labor Party federal preselections and administrative body elections — and that the agreements claim to be a renewal of the party disguises its traditional factional aims.

The critics have a point. The agreement states: “too much power is wielded by too few with little regard to policy, proportionality or local democracy … the CU and IL have determined to forge a new path. One based on respect for ideas and values, on policy and solidarity and on creating strong foundations that still allow for a dynamic and diverse organisation …”

Before noting that “[Principles:] 1.Mutual support for State and Federal Preselections … where seats become vacant or new seats created, CU and IL will support each others’ candidates.”

Same old, same old. Right or Left candidates imposed on electorates they may not match, with no regard to local branches. Notions of primary-style preselections, aired in the 2011 Faulkner-Carr Report, are a million miles from this.

Indeed, it gets worse. “It is, however, recognised that the IL … is not adequately represented in state and federal parliamentary or party structures due to the operation of the Stability Agreements. Accordingly the IL, will be supported by CU with respect to the anticipated creation of a new Federal Seat in the North West of Melbourne …”

Several insiders have told Crikey that this seat — to be created in the AEC’s new redistribution later this year — has been reserved by the Industrial Left faction for Jane Garrett, the current state member for Brunswick. Garrett, then a member of the “Industrial Left” faction within the Socialist Left, narrowly held Brunswick in 2014, fending off the Greens with Liberal preferences.

In 2015-16, she attempted to find a new lower-house seat, and then to get on an upper house ticket, failing at both. Her lower house move was blocked by Kim Carr, as an anti-carpetbagging control. It is this affront, critics say, that has more to do with the exit of the Industrial Left from the Socialist Left (a remnant Industrial Left group remains within the SL) determination to broker a new pact than the desire to let a hundred flowers of thought bloom.

The CU-IL group is claiming to be on the way to a majority within the Victorian party, if they can sign up the SDA and the Cons. But the list of participants at the bottom is pure fantasy, and the one part not being circulated is the signatures sheet. No one believes that the Shoppies or the Cons (long cons and short cons?) will sign up. In response to this circulating agreement, Matthew Hilakari, Socialist Left secretary, has circulated his own document, which Crikey has obtained, stating: 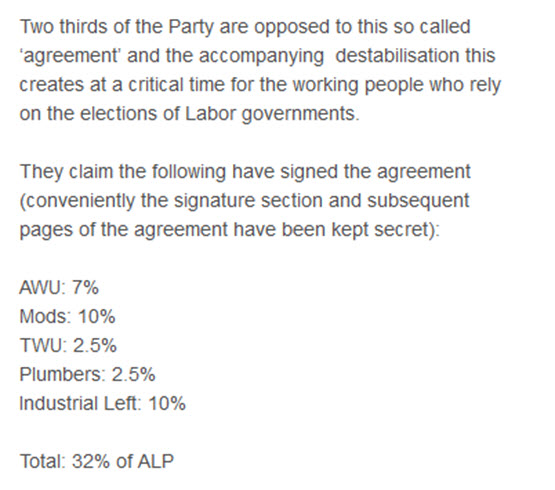 The absolute worst prospect for Labor is that the CU-IL group will manage to gain a few more small-fry participants, without persuading the SDA or NUW across — which would leave the two pacts in a stalemate.

The perverse product of this would be that Left and Right groupings with quite different ideas of what society should look like, would be locked together, internally horse-trading policies, while in competition with a mirror Left-Right pact doing the same. Supporters of the Industrial Left say they have nothing to lose from hooking up with the right-wing “Mods” faction; they argue that SL leaders are stifling more radical demands at a time when the public is receptive to unabashedly left-wing arguments on wages, public ownership and other issues.

Of course, many of the criticisms of the Stability Pact (including those made by this correspondent) are correct. In Victoria, the SL has steered social policy into a range of cultural and personal issues, with a mania for control and surveillance — while allowing the Right free run on the economy, which appears to involve selling chunks of Melbourne to China, and giving the bits they don’t want to Apple, for free.

But the groups creating the “Industrial Left” haven’t exactly been brimming with alternative proposals. Hence the belief that what is driving this move is the ambition, solidarity and long history of key players. All of it centred round the bizarre, to outsiders, cult of Jane Garrett.

Read more about the cult of Garrett in Crikey tomorrow.