Half of the benefits of the tax cuts would flow through to workers through higher real wages, a necessary boost to workers given subdued wages outcomes.

The only way to get Australian wages growing strongly again is through productivity enhancing investments. A competitive company tax rate will primarily benefit workers and wages.

Research from Treasury found that two-thirds of the benefit of a company tax cut would flow to households, primarily through rises in real wages. It found that reducing the company tax rate to 25 per cent would boost real wages by 1.2 per cent, putting hundreds of dollars in the pockets of workers every year.

So does cutting company tax produce wages growth? Let’s look at a real-world example. Starting under former Labour prime minister Gordon Brown and continuing under the Tories, the UK government has cut its company tax rate significantly, from 30% to, currently, 19% (although it has tightened some areas of deductions to partly offset the cost). So, has the UK seen real wages growth? 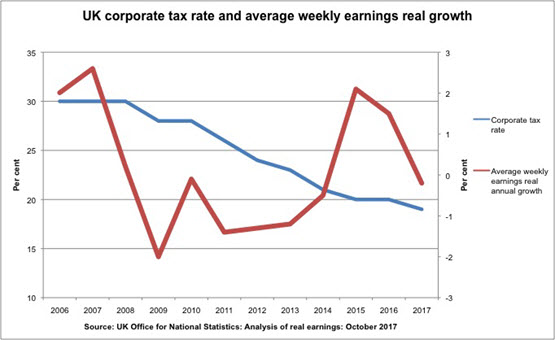 Still, Australia, where the company tax rate has stayed the same — 30% — since the 1990s has also had wage stagnation. So maybe British wages performed better than Australia’s, given the Brits have cut their headline rate to 11 points below our rate … 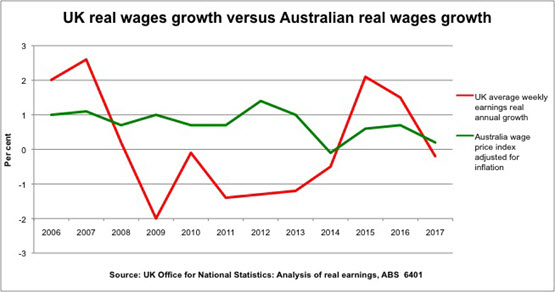 Hmmm. Again, not so much. Maybe don’t persist with that line of argument, folks.

What about another economy that has cut tax rates but looks a bit more like Australia’s resources-based economy? Say, like Canada. The Canadians cut their federal company tax rate — which is more complex than Australia’s because of provincial taxes — significantly between 2006 and 2015. How did wages fare in Canada compared to us? 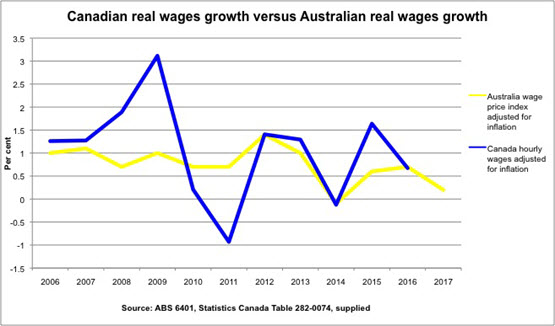 Don’t bank on that 1.2% pay rise promised by big business just yet.