The US Congress recently passed tax bills through the House of Representatives and the Senate that cut the US headline company tax rate from 35%, the highest rate in the world, to 20%.

The US Internal Revenue Service collects very little revenue from its current company tax. The system is broken, with a high rate, narrow base, and loopholes that permit its largest multinational enterprises – Google, Apple, Amazon and big pharmaceutical companies – to keep trillions of dollars offshore, out of the tax base. Half of US domestic business investment now goes through “pass-through vehicles”, like limited partnerships, which avoid company tax.

The US, historically considered to be a leader in tax reform, is this time a follower, responding to intensifying competition for global capital around the world. The trend was identified nearly a decade ago by the Henry Tax Review, which recommended that in the “short to medium term” Australia’s company tax rate of 30% should be reduced to 25%.

Now that the US has lowered its company tax rate, this leaves Australia as one of only a handful of countries at this level. These are not unimportant countries: they include Japan, Germany, Brazil, India and France. But they are also facing pressure; Macron proposes a plan to lower the French rate from 33.3% to 28% or lower.

The Australian government’s enterprise tax plan proposes to reduce the corporate tax rate from 30% to 25%. Reform was enacted this year to deliver this for small and medium enterprises (up to $50 million a year in turnover), but not for our largest companies. Arguably, this is the worst possible policy outcome.

The company tax performs many functions and the company tax rate is only one element of the whole system. It’s important to remember that companies are not people who can bear a tax burden. Instead, the company tax operates as a proxy for collecting revenue from economic rents (such as resources), labour and capital.

The company tax rate also has an important role in tax planning by multinational enterprises. The higher Australia’s rate relative to other countries, the more incentive companies have to erode the tax base with deductions, or profit shifting, to lower tax jurisdictions. We have seen this recently in the Chevron case in which very large interest deductions were paid to related companies in tax havens; BHP and Exxon are also in the ATO’s sights, as they have claimed large expenses to reduce their Australian tax bill, shifting profit to Singapore and other countries.

Nonetheless, Australia raises significant revenue from company tax. The proposed tax cut was estimated in the budget at $48 billion over 10 years, or about $8 billion per year. The effect of increased investment could improve tax collections and reduce the fiscal cost to about $4 billion per year according to modelling. But in an era of fiscal deficits, that is still too expensive.

In a recent paper, we argue that the government has options to broaden the company tax base, or modify our corporate-shareholder imputation system, so as to fund the company tax rate cut. So, what to do? 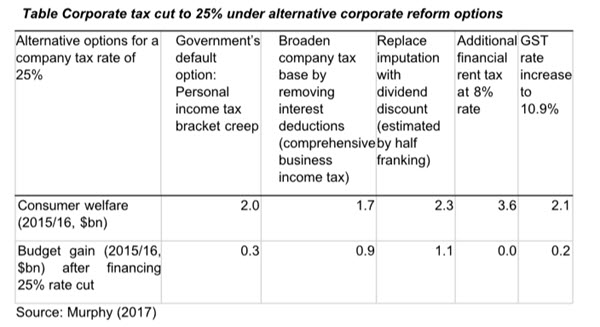 Modelling set out in the table above indicates that the reform options we consider are both revenue-neutral and welfare-enhancing. They are as follows:

1. Broaden the base by limiting or abolishing interest deductibility

The approach of broadening the base and lowering the rate has long been useful in producing efficiency gains and sufficient revenue. We can do this in the company tax by eliminating deductions for interest costs. This is called a comprehensive business income tax (CBIT). We would exempt or provide a discount for dividend and interest income and capital gains at the personal level.

2. Replace the dividend imputation system with a discount for dividends

Dividend imputation was designed on a “closed economy” assumption about investment. Today, it is more appropriate to consider Australian corporate-shareholder tax policy as a “small open economy” context. Domestic investors including high income individuals and superannuation funds that primarily benefit high earners are effectively being subsidised through our refundable dividend imputation system which also generates a bias is generated towards debt for foreign investment in Australian companies.

We could replace full imputation with a partial dividend discount, similar to the CGT discount and combine this with a lower company tax rate of 25%, on a revenue neutral basis.

3. A supplementary tax on financial services

A tax on economic rents or “super profits” in the financial sector on top of the lower corporate tax rate could also be budget -neutral. We model an 8% financial services rent tax which is a much more efficient than the Major Bank Levy introduced in July. Australia should also continue to levy substantial taxes on our resources, including royalties and profit taxes.

Australia cannot direct global tax policy change. The company tax, as it has existed through the 20th century, is becoming increasingly unsuited to a global economy. We see the company tax rate cut as necessary, and call on the government to carry out broad tax reform to ensure fair and adequate taxation of capital and business, while not impeding investment. Such a reform could produce positive fiscal and economic effects and have potential to be combined in designing Australia’s company tax for the next decade.