Salad on menu for whale sharks off WA

Whale sharks have displaced the Kodiak bear as the world's biggest omnivore after Aussie researchers discovered they like a bit of salad with their krill.

Australian researchers have made a surprising discovery about the dining habits of whale sharks, handing the largest fish in the sea another world title.

It turns out the giant creatures routinely enjoy a salad alongside hefty helpings of krill, meaning they have officially dethroned the Kodiak bear as the world’s biggest omnivore.

Scientists made the discovery while studying whale sharks off Western Australia’s Ningaloo reef and say it is cause for a re-think about what is really sustaining the super-sized species.

“Everything we thought we knew may not actually be true,” fish biologist Mark Meekan, from the Australian Institute of Marine Science, said.

“But with sophisticated methods that look at the microchemistry of these animals, this story becomes much, much more complex.”

Then they looked at what was present in skin samples from whale sharks.

“This study suggests they are feeding on quite a bit of plant material, more so in fact than krill,” Dr Meekan said.

He believes the size of the whale shark has prompted an evolutionary response that has effectively turned by-catch – such as the brown sargassum seaweed common at Ningaloo – into food.

“These are very big animals and when you’re a huge animal you need lots of food,” he said.

“But it costs lots of energy to push their mouths – open like a huge net – through the water. When you get a gut full of food but there’s also a lot of algae what do you?

“Do you throw it up? Energetically that’s a very costly thing to do because you’ve just spent all this energy collecting it.

“Whale sharks have simply got round this in an evolutionary sense by being able to digest the seaweed. They are turning by-catch into a part of their diet.”

Another part of the study involved collecting and testing whale shark poo, with the results showing they were certainly eating krill – but were not metabolising much of it.

“They are a lot less efficient than what we’d expect them to be if they’d evolved just to eat krill,” Dr Meekan said.

The study has been published in the journal Ecology.

Save the krill – kill the whales! 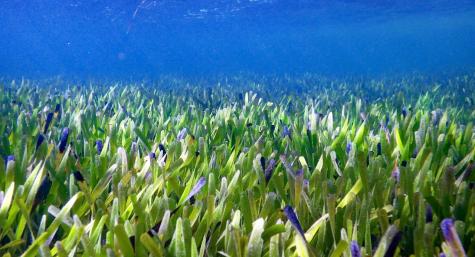 Vast plant as old as pyramids found in WA

Licence to krill: when conservationists and corporates cosy up