The city of “Lysychansk is still being fought for,” he told a news conference with Australia’s visiting prime minister on Sunday.

Earlier on Sunday, Russia had claimed control of the last major Ukrainian-held city in one of two eastern provinces that have been the focus of Moscow’s grinding war.

If confirmed, Russia’s claim would bring its forces one step closer to achieving one of President Vladimir Putin’s major goals, capturing the entire Donbas, where a pivotal battle of the war is unfolding.

Defense Minister Sergei Shoigu told Putin that Russia’s troops, together with members of a local separatist militia, “have established full control over the city of Lysychansk,” according to a ministry statement published Sunday.

As is typical with such descriptions, the Russian statement said the seizure of the city marked “the liberation of the Luhansk People’s Republic,” one of two Ukrainian provinces that have declared their independence and are recognised by Moscow.

The BBC quoted a Ukrainian military spokesman as denying Lysychansk was under full Russian control. Yuriy Sak told the BBC that it will “not be game over” for the Donbas region even if Russia captures all of Luhansk.

“For Ukrainians, the value of human life is a top priority, so sometimes we may retreat from certain areas so that we can retake them in the future,” Sak added.

Oleksiy Arestovych, an adviser to the Ukrainian president, had predicted late Saturday that Lysychansk’s fate could be determined within days. Earlier Sunday, Luhansk’s governor said Russian forces had strengthened their positions.

“The occupiers threw all their forces on Lysychansk. They attacked the city with incomprehensibly cruel tactics,” Governor Serhiy Haidai said on the Telegram messaging app. “They suffer significant losses, but stubbornly advance. They are gaining a foothold in the city.”

Ukrainian fighters spent weeks trying to keep Lysychansk from falling to Russia, as neighbouring Sievierodonetsk did a week ago in bloody battles that devastated both cities.

Since pulling back from northern Ukraine and the capital, Kyiv, after setbacks early in the war, Russia has focused its offensive on the Donbas, a region of mines and factories where Moscow-backed separatists have been fighting Ukrainian forces since 2014.

If Russia prevails there, Ukraine would lose not only land but perhaps the bulk of its most capable military forces, opening the way for Moscow to grab more territory and strengthen its ability to dictate terms to Kyiv.

Kramatorsk, another major city in the Donetsk region, also came under fire, the regional administration said. 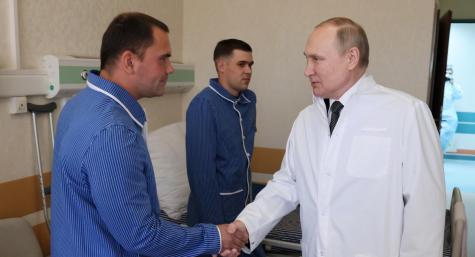 There many reports including from French media on the ground showing the majority of the civilian population in Lisichansk are in favour of the Russian takeover. They see it as liberation from Ukraine.