Good morning, early birds. A senior bureaucrat reportedly raised concerns that ministers would start 'messing with due process' when it came to the appointment of trade commissioners, and there wasn't a single ambulance available in Melbourne at one point yesterday morning. It's the news you need to know, with Emma Elsworthy.

Finalise people for the six trade commissioner jobs otherwise ministers will start “messing with due process”, the then incoming secretary of the Department of Premier and Cabinet reportedly told bureaucrats, according to internal emails seen by the SMH. Jim Betts wanted the recruitment sorted for the lucrative roles before the selection went before senior ministers — such as then deputy premier John Barilaro. Barilaro was appointed to a plum NY trade posting paying half a million dollars, after another candidate had her offer rescinded. Leader of opposition in the NSW upper house Penny Sharpe said the message was clear: NSW’s senior public servants were “forced to try to protect recruitment processes from ministerial interference”. Yikes. Premier Dominic Perrottet (who was treasurer then) said Barilaro had told him he wanted to apply but said that recruitment is an “independent” process. But Guardian Australia reports the HR officer from the department recruiting for the positions wrote in an email that all six trade commissioner jobs would need cabinet approval — showing at least one public servant thought differently.

To a neighbouring question of integrity now, lobbyists will be banned from working on Queensland election campaigns and must register as a lobbyist under sweeping reforms in the Sunshine State. Premier Annastacia Palaszczuk vowed to “lock, stock and barrel” all 14 recommendations from the blistering report into the government’s integrity crisis, The Australian ($) reports. Former vice-chancellor of the Queensland University of Technology Peter Coaldrake received 327 submissions and had nearly 100 meetings over four months: he found a culture “too tolerant of bullying” and “dominated by … short-term political thinking”, The Courier-Mail ($) continues. Palaszczuk also committed to releasing secret state cabinet decisions within 30 days.

ON SICKNESS AND ON HEALTH

There wasn’t a single ambulance available in Melbourne at one point yesterday morning, with Ambulance Victoria calling a “code red” from midnight to 4am. The union’s Danny Hill says it’s terrifying that Melbourne’s entire population didn’t have access to an emergency vehicle “no matter how short that time frame was”, the Herald Sun ($) reports. What caused it? Staff shortages and ambulance ramping mostly — that’s when beds are so overwhelmed that medical staff treat patients in the ambulances in the car park. Grim.

It comes as the 2021 Census showed one in five Australians aged 16 to 34 had twice the rate of psychological distress during the pandemic compared to those aged 65 to 85, The Age reports. That means more than 2.2 million Australians have or had a diagnosed mental illness — but it’s hard to say if it’s definitely a result of the pandemic because we’ve never asked this question before in a census. One expert says the findings were a mirror of what she found in other surveys though — directly linked to the loss of a job or, importantly, a disengagement from the “purposeful things” young people did before the pandemic.

Some truly explosive testimony has been aired overnight about the January 6 Capitol riot in the US. Here’s a sprint through it, courtesy of The New York Times live blog: a former aide to Donald Trump testified that the former president tried to grab the steering wheel of the presidential limo from the Secret Service so he could join the mob, after being told it was too dangerous. They restrained him. The president was reportedly desperate to join the Capitol riot, which is a truly bonkers sentence to type. At the time, when protesters were chanting “Hang Mike Pence“, witnesses said Trump “thinks Mike deserves it”. The former US national security adviser Mike Flynn pled the Fifth (refused to answer) when he was asked whether he believed in the peaceful transfer of power (a former leader handing the reins to the new one) and whether the Capitol violence was justified. Meanwhile a lawyer who helped in Trump’s efforts to undo the 2020 election result has said the FBI took his phone last Wednesday, The New Daily reports.

To another high-profile US case now, overnight convicted sex trafficker Ghislaine Maxwell has been sent to prison for 20 years for helping the late billionaire paedophile Jeffrey Epstein find girls for sex, news.com.au reports. The judge said her criminality was “extensive” and that she was Epstein’s “number two”. Australian woman Virginia Giuffre said in a statement to Maxwell that she opened “the door to hell” for her and other victims — many of whom appeared relieved that justice had been served after the sentencing was announced.

What’s in a number? It’s a question The Guardian’s Tim Dowling has been mulling over as he approaches 60. Age doesn’t mean what it used to — when the gals from Sex and the City (SATC) got back together (sans one) for a spinoff of the hit TV show, a report that The Golden Girls actors were the same age as the SATC threesome made waves. But to quote Carrie, who in one memorable episode had been heckled by a class of hopeful single women who were unimpressed with her advice, “They were wrong. I was older and wiser.” Among Dowling’s revelations is that the difference between youth and age is not physical — it’s “just the added weight of all the years piled up behind you”, he says. Age means contending with the “invisible volume” of everything you’ve done and forgotten, he rather beautifully continues. But the physical is real too — at some point in life you start to make a noise when you sit or stand, he admits. You can try not to, but “the noise wins in the end”.

He says one of the amazing things of age is looking at people you’ve known for yonks and seeing “a weird hybrid of the young person they once knew and the improbably wrinkled crone before them”. Sure, there are things that suck about ageing, he says, but there’s a lightening of mood too, statistically from 54 onwards. Plus, ambition cooling off a bit can be “sort of a relief”, he says. Monotasking becomes your modus operandi — you slow down, but “one’s later years are a great time to pick up a new skill from scratch”, he says. All that restlessness that stopped you from focusing in your youth distils into careful concentration. Finally, older people can come across aloof, rude and mistrustful, he admits — but mostly we’re just a bit hard of hearing, he says.

Wishing you optimism, grace and humility this morning.

They don’t have any right to do that. They’re spectators … they should be removed. There’s no pure disrespect like that, I don’t go up to their face and go to their nine-to-five and start clapping when they’re scanning shit at a supermarket, do I?

The tennis star said he received abuse from spectators at Wimbledon in what was a characteristically heated match where he also called the line judge a “snitch”. Kyrgios said if members of the crowd were aiming their abuse at opponent Paul Jubb he’d say the same thing. Afterwards, Kyrgios was asked if he would consider a career in commentary, to which he replied that he would — if the pay was high enough. 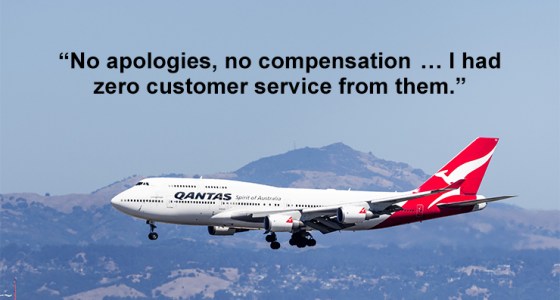 ” … Diana Abeleven was travelling with small kids during the first weekend of the school holidays. She checked in their car seats, clothes and nightly medicine and they didn’t turn up again until her holiday ended. ‘As I went to the airport for our flight home, another plane arrived and out popped our bags and car seats,’ Abeleven says. ‘So I just rechecked them back in and got them home.’

” … Bad experiences are even worse when you’re travelling for sad reasons. Kate was travelling to Devonport last week for her father’s funeral and her flight was delayed for seven hours. A day she had hoped to spend scanning old photos for his memorial service turned into hours spent in two airports, with no acknowledgment from Qantas about her experience.” 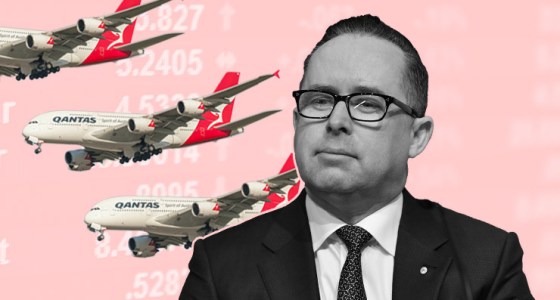 “It is perhaps unsurprising that Crikey has devoted almost an entire week of leading stories to a demonisation of Qantas and its CEO, Alan Joyce. Alas, the articles devoted to Qantas ignored the difficulties Qantas faces and also failed to highlight the areas where Qantas should legitimately be criticised.

“(At this point it would be remiss not to note that this writer is not an impartial observer of the travel industry, as both a partner to and a major competitor of Qantas’ accommodation business. However, let’s call that a draw and move on.) While Qantas used the cover of COVID to remove parts of its unionised workforce, where you stand on that matter is a question of perspective.” 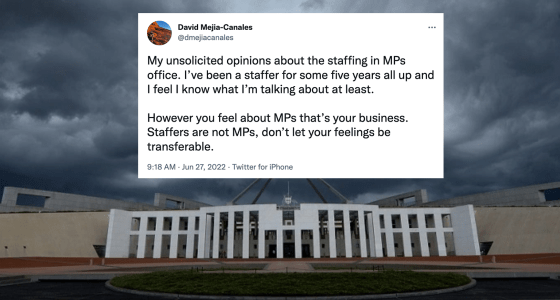 Confessions of a former staffer: Albanese cuts to crossbench staff is a ‘deliberate decision’ to block scrutiny

“My days at Parliament started at 7am and ended anywhere between 9pm or 2am. Every. Single. Day. Now all of this will be the work of one person. Not to mention the travel, being away from your friends and family for long periods, the never-ending torrents of abuse.”

Three in custody after 46 people found dead, 16 injured inside semitrailer in Texas (SBS)

The simple solution to fixing the wage gap — Jenna Price (The Age): “Here’s what the research says about men and talking. Boys get the majority of attention in class, wrote scholars David and Myra Sadker and Karen Zittleman in 2009. Women in congressional hearings in the US are more likely to be interrupted than men, also in the High Court of Australia. Even the ABC’s panel show Q&A is not immune (anecdotally better when Virginia Trioli is in charge). What does the research say about women and talking? Veteran linguistics researcher Deborah Tannen says they talk much less and police themselves much more, for fear of being seen as ‘too aggressive’.

“And let’s not even talk about what happens when men go out to dinner with their doting wives. Only one way forward: change male behaviour. Maybe take the advice of Aaron Burr, antihero of Lin-Manuel Miranda’s Hamilton: talk less, smile more. It won’t be easy. But women are so sick of being told to change their behaviour that maybe it’s time for blokes to step up. Or, ahem, shoosh up.”

How the government can unlock the electric car market — Monique Ryan (The AFR): “On Friday, the Albanese government will roll out its signature electric vehicle policy — an electric car discount removing the 5% import tariff on some imported EVs and the 47% fringe benefits tax on electric cars provided by employers. While these important steps will make EVs more affordable, growing sales and long waiting lists for EVs in Australia demonstrate that our uptake is limited not by consumer demand, but by supply constraints.

“So, what is the key to unlocking the EV supply chain? Fuel efficiency standards would incentivise manufacturers to bring their low- and zero-emissions vehicles to Australia — and penalise them for failing to do so. Fuel efficiency standards are used to regulate the average CO2 emissions of a manufacturer’s fleet and serve to reduce both fuel consumption and CO2 emissions. They’ve been adopted in most countries worldwide; Australia, Turkey, Indonesia and Russia are the only G20 countries with no mandatory standards for fuel efficiency.” 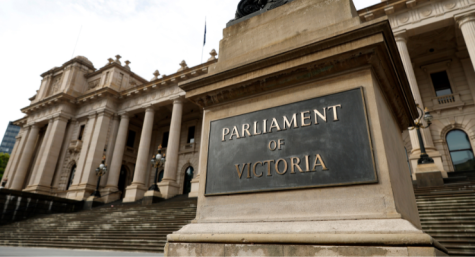 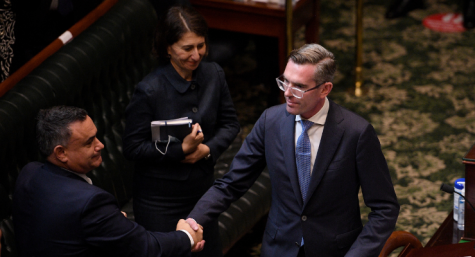 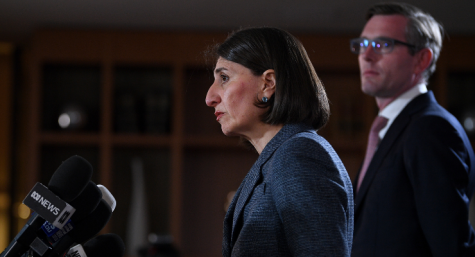