Negotiations for a trade deal with the European Union will be fast tracked and could take place sooner than October, Prime Minister Anthony Albanese has declared.

Speaking at the NATO Summit in Madrid on Wednesday, Mr Albanese announced discussions about entering into an economic relationship with the EU could resume in months, following a meeting with European Commission president Ursula von der Leyen.

Talks about a trade deal had stalled because of Australia’s damaged relationship with France after it dumped a $90 billion submarine contract, and its lack of action on climate change.

“There’ll be further talks as soon as October but perhaps even sooner,” he said.

“We want to see between now and March real progress that had stalled and… identifying what the issues are that need to be resolved, and then set about resolving them.”

Mr Albanese previously said for a potential deal to progress, there had to be serious ground made by early 2023.

The prime minister said it was in the nation’s interest to diversify trade relationship and tap into the European market.

Mr Albanese took to the election campaign a promise to target a 43 per cent cut in emissions on 2005 levels by 2030.

Mr Albanese will visit Paris following an invitation from French President Emmanuel Macron in a bid to repair the relationship.

The prime minister described Mr Macron as a “a warm character” after speaking with him at the NATO gala dinner on Tuesday night.

Russia’s invasion of Ukraine dominated the security talks, but the “challenge” of China was also discussed.

A new strategic concept outlining NATO’s priorities over the next decade was approved on Wednesday.

Mr Albanese gifted his UK counterpart Boris Johnson a Rabbitohs rugby league jersey at their first meeting as leaders, pledging to work together on security in the Indo-Pacific region and climate change.

Mr Johnson congratulated the prime minister on his election victory on the sidelines of the summit.

Their one-on-one meeting included discussion about the AUKUS security partnership, “common action” in the Indo-Pacific region, climate change and shocks to the global economy. 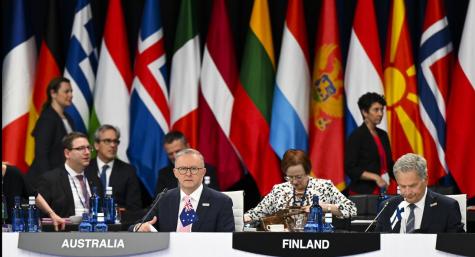 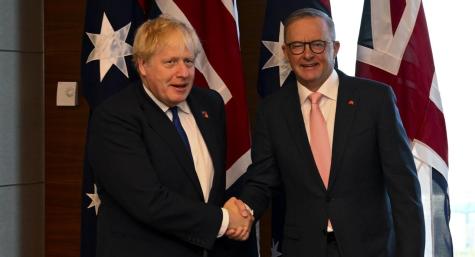