The Queen will miss the National Service of Thanksgiving at St Paul's Cathedral after experiencing "some discomfort," at her Platinum Jubilee celebrations

The Queen will skip the National Service of Thanksgiving at St Paul’s Cathedral after experiencing “some discomfort,” at her Platinum Jubilee celebrations

While the monarch will miss Friday’s service “with great reluctance” she will still attend a beacon-lighting event at Windsor Castle on Thursday evening, the palace said.

She is believed to have experienced episodic mobility issues during Thursday’s events.

It is understood the decision was considered regrettable but sensible due to the length of the journey and time involved and the physical demands the service would require.

The Prince of Wales will officially represent the Queen at the service on Friday.

In a statement issued on Thursday evening, Buckingham Palace said: “The Queen greatly enjoyed today’s birthday parade and flypast but did experience some discomfort.

It comes after the monarch took centre stage at her historic celebrations on Thursday, greeting crowds from the Buckingham Palace balcony, surrounded by her family.

Huge cheers erupted from thousands of well-wishers packed on to The Mall in central London as the monarch emerged for the flypast after Trooping the Colour.

Wearing sunglasses, the 96-year-old sovereign looked joyful as she surveyed the patriotic scenes, giving broad smiles as she enjoyed the aircraft display.

It was the second of two appearances from the monarch on the balcony on Thursday – the start of an extended Jubilee weekend marking her 70-year-reign.

Earlier, she joined her cousin the Duke of Kent on the famous frontage to take a salute of her soldiers returning from Trooping the Colour, after the Prince of Wales deputised for her on the parade ground.

Eighteen royals including the Queen stepped out to watch the high-profile flypast, with the Prince of Wales, the Duchess of Cornwall, the Duke and Duchess of Cambridge and their three children Prince George, Princess Charlotte and Prince Louis flanking the monarch.

The Queen leaned over to chat animatedly with four-year-old great-grandson Louis, who at one stage covered his ears, and reacted with his mouth wide open and eyes tightly shut as the aircraft thundered overhead.

Dressed in a dusky dove blue Angela Kelly coat which she wore for her official Jubilee portrait, and matching hat, the Queen was holding a walking stick and wearing the Guards’ Badge on her coat.

The nation is embracing the extended bank holiday weekend of pomp, pageantry and star-studded festivities, which will see celebrities and the public gather in their millions in tribute to the monarch.

Thousands of wellwishers draped in Union flags, party hats and plastic tiaras flocked to London for the spectacle.

Thursday marks not only the start of the Jubilee, but also the 69th anniversary of the coronation of Elizabeth, who became Queen on the death of her father George VI in February 1952.

Some royal family members were absent on Thursday, including the Queen’s second son Prince Andrew, 62, who settled a US lawsuit in February in which he was accused of sexually abusing a woman when she was underage. Andrew denied the accusation.

The palace announced later that Andrew had tested positive for COVID-19 and would not attend a service of Thanksgiving on Friday. 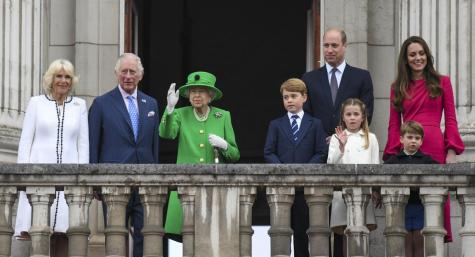 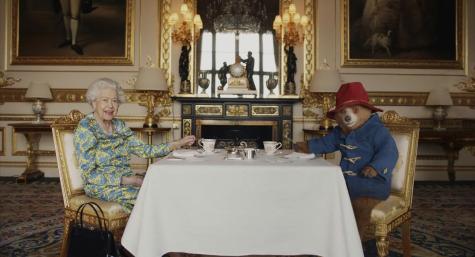 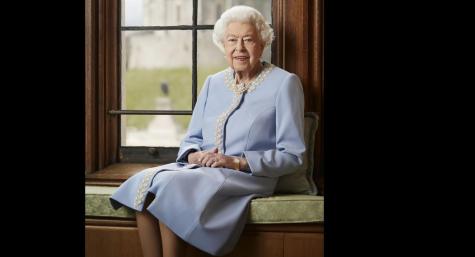