When will the Liberals work out how toxic Barnaby Joyce really is?

Having helped destroy a Coalition government, Barnaby Joyce now threatens to inflict immense damage on the Coalition — if there is to be one — in opposition.

In a profession riddled with giant egos and hypertrophied self-importance, Barnaby Joyce still stands out as Australia’s most selfish politician. At no stage have his numerous personal and political failures punctured his conviction that whatever Barnaby wants, Barnaby should get. And it doesn’t matter what the cost is to anyone else — his family, his colleagues, the national interest.

It’s a view that is a refinement of the basic Nationals ethos, that politics is about taking as much as possible from the nation without regard to anyone else. 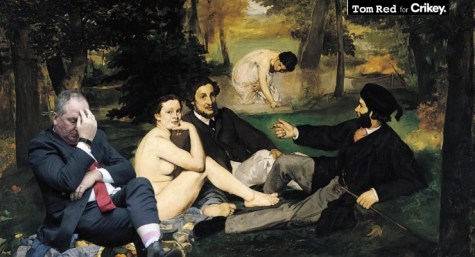 Joyce leads a party that garnered just 4% of the national vote in the House of Representatives, along with a portion of the 7.7% of the LNP vote in Queensland. That is, he represents well under 10% of Australian voters — far fewer than the Greens, who secured nearly 12% of the vote nationally. The LNP vote fell by more than 4%. The Nationals’ overall vote fell by 0.3%. The only state where it rose was in Victoria — by 0.3%.

Can Joyce claim credit for that? Joyce only deigned to grace Victoria with his presence for a few hours in total in recent weeks, flying in and out just three times over the course of a six-week campaign. He didn’t dare go near the electorate of Gippsland, home of Darren Chester. Chester’s decency and commitment to the public interest are evidently unfathomable to Joyce, given he forced Chester out of the ministry when he returned to soiling the role of deputy prime minister last year. Chester got a 4.4% swing to him.

Joyce instead devoted considerable time to campaigning in the Northern Territory and the Hunter Valley. How’s that working out? The Country Liberals suffered an 8% swing in the NT and Labor held both its seats. Labor got a swing to it in Hunter. The “best retail politician in the country” lowered the vote where he campaigned, whereas it increased in seats he stayed clear of.

That as nothing, though, compared to his role in lowering the Liberal vote. Scott Morrison might have evoked visceral hatred among voters — especially women, who were waiting for him with baseball bats — but Joyce, along with Peter Dutton, formed a triumvirate of electoral toxicity with Morrison that it’s hard to recall the likes of.

Joyce provided a convenient, one-size-fits-all, all-you-can-eat symbol of what was wrong with climate policy, integrity, and the basic standards of decency in public life. Not for nothing did the teal independents make liberal — pun intended — use of the phrase “A vote for X is a vote for Barnaby”.

Surveying the smoking ruins of the Morrison government, Joyce — true to form — doesn’t care, saying it’s not his problem, comparing his influence to Tim Wilson losing Nationals votes in their seats, and flagging, inevitably, that net zero is again up for discussion. 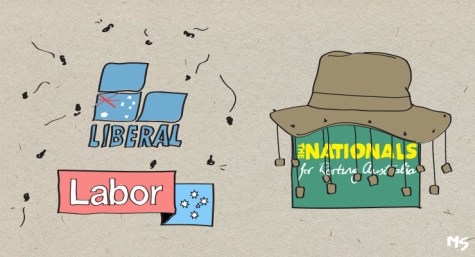 Hated in the cities, Joyce’s effective regional campaign flies under the radar

Remember all those press gallery journalists who devoted acres of columns to explaining that Morrison’s net zero strategy was a piece of political genius and a major triumph that would end the climate wars? What staggeringly insightful analysis that proved to be — senior political journalists queueing up to tell us a turd wrapped in a ribbon was the merriest of Christmas gifts. It was always a meaningless target with a meaningless plan. Turns out the bribes and pork-barrelling that Joyce exacted as the price for his grunted, tired endorsement of net zero are meaningless now too.

We know Barnaby is innumerate — he once claimed Australia was at risk of defaulting when its net debt was $50 billion, compared to $700 billion now. But clearly that innumeracy extends to the process of forming government. The Nationals remain a rump of reactionary bystanders without the Liberals. They can’t conduct their rorting and thievery without the Liberals. Making the Liberals unelectable, even by the Nationals’ own standards of political conduct, is profoundly self-defeating for them. But Joyce seems committed to inflicting as much damage on his Coalition partners in opposition as he did in government.

The path back to power for the Liberals will be infinitely harder with Joyce than without. If the Nationals won’t do the honourable thing and dispatch him to the backbench — or preferably out of public life altogether — the Liberals, for self-preservation, need to abandon the Nationals until they come to their senses. Barnaby Joyce isn’t just selfish, he’s profoundly toxic. 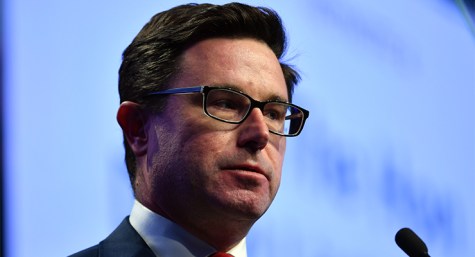 Littleproud leads the Nationals, but they face more than just a leadership tussle 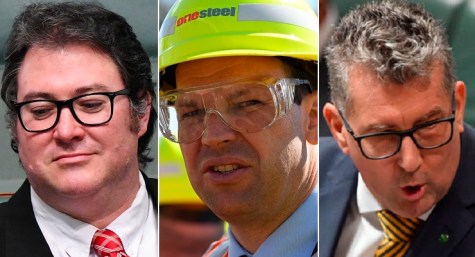 Hated in the cities, Joyce’s effective regional campaign flies under the radar

I would say that Canavan is far worse, and that is really saying something

I think Canavan dumping on the 2050 target was up there with Morrison’s support of Katherine Deves as key elements in solidifying the Teal vote during the campaign. It showed that even the Coalition’s pathetic attempts at a climate policy were under threat if they were returned.

Staggering as is to think that someone is worse than Joyce, I agree.
Notwithstanding the hatchet job on BJ is thoroughly warranted.
An utterly despicable piece of work.

Canavan is Don Jr to the Beetrooter’s Trump. And the Nats overall are about as attractive as the contents of Joyce’s Y-fronts on a hot outback day

The Liberals can’t drop Joyce and the Nationals, without them, they would never get elected to government at the Federal level.

Without the Lib dog for the gNat tail to wag neither would ever get within cooee of the trough again, never mind grow fat on all that pork.

No they can’t ditch that pair of idiots.
That’s up to the Nats.
That said their prospects of returning to the treasury benches with that pair of swaggering morons in situ look pretty grim.

Very true, but it might be the making of them. They’d finally have to come up with decent policies and stand against Nationals in the seats they currently hold. Better still, the likes of Barnyard would be reduced to a backbencher’s salary with no hope of getting any more access to taxpayers’ hard earned.

A pox on both their houses. Neither is any different in their pandering to the ultra wealthy. The driver for the Liberals of late has been the ex PM’s “extra curricular” belief system’s disciples and their “prosperity theology” financial dogma. What is worse is that they are still there and will continue with their deadly (think Robodebt just for one) policies, just waiting with them if this country should be so stupid as to re-elect them to govt ever again.

As Ross Gittins wrote today Scotty has God on his side. Porker Joyce is a devout Catholic and might claim the same. But they both need guidance from their pastor/priest about integrity, humility, empathy. And try to wind back their hypocrisy and arrogance and all too obvious bastardry.

Can’t be too devout if his extra marital carry on is any guide.

“need guidance”? They have just been booted very, very heartily in the arses at a federal election. If they don’t get that there is no hope for them.

Good luck with any Pentacostal minister ever telling his congregation that lying, cheating and daylight robbery is a sin.

I grew up in Country Party territory on the NSW mid north coast. I wasn’t a political kid, but quickly learned to detest the local overloads thanks to their toxic combo of racism and neglect. Decades on I fervently hope that Barnyard stays where he is for as long as possible, demonstrating day after day what the renamed County Party really stands for: Itself.

Ah yes, never forget the good old Country Party, and the proud claim of its MPs: “I’m a Country Member!” At least they were honest about that.

To which Great Gough replied “I remember!”

Thanks for Gough’s matchless wit.

To add piquancy, he was responding to the CLP’s Sir Winton Turnbull.
(Alas, not Winston, as often misquoted.)

The country hayseed MP’s are very big on knighthoods. Who can forget the sanctimonious Sir Joh who oversaw six of his members gaoled after the Fitzgerald inquiry. Sir Joh faced two perjury trials which saw his link to a juror stymie the trial.

It hasn’t changed much in rural Qld. Colin Boyce was elected in Flynn. He’s just barely smart enough to think he knows everything about climate change. The rest of us book learning woke communists are plotting world domination and must be stopped.

I remember the howls of outrage when Doug Anthony was caught using his ministerial car as a school bus for his kids. These days it is barely noticeable. Lying, rorting and pork barrelling is hardwired in both the Nationals and Liberals.
As my father used to say, country voters were always far better treated by Labor and without fail were kicked in the guts for their troubles.

Barnaby Joyce is also remembered for his attempt to turn Ian Turnbull, the wealthy Moree farmer and tree butcher who ambushed, tortured and murdered the NSW environmental officer Glen Turner, into a Ned Kelly figure. In a disgusting dog whistle to their base, Joyce along with the local mayor Katrina Humphries, said violence was “always going to happen”, essentially blaming the crime on discrimination against the agricultural community.

There are still a lot of people who have hitched their wagon to his horse and are unlikely to change mid stream.

I love a good mixed metaphor!

You will be saddened to learn that the horse, already struggling to carry the fools gold laden saddle bags, is in danger of drowning mid-stream with the wagon in tow. Where is that vet equipped with a large needle when most needed?

A good metaphor for the decimated LNPee.

Best one I ever saw was in another country but still involved coalition partners jockeying for power: “In this game of cat and mouse, somebody is going to lose some feathers.”

They’ll burn that bridge when they come to it!

No need. It washed away in the recent floods.

How about “The Coalition will really be in the soup if they are led by a potato and a beetroot – but at least it would be vegan.”

Yes, but would it be organic ?

How could it not be given the amount of B/S?

I was trying to work in horses#!t and trickle down as well, but decided to close the barn door while I was ahead.

Before closing the door I hope you checked, with the lights on, that the Barnaby was physically present in the barn as beetroots are notoriously difficult to see much like other black holes.

Those people don’t even wipe when dismounting, that says a lot about them.