Pakistan's defiant former prime minister Imran Khan has called for his supporters to march peacefully on Islamabad to press for new elections.

Pakistan’s ousted prime minister Imran Khan has announced a plan to topple the new government, with his supporters converging on Islamabad for a protest that he hopes will prompt the dissolution of parliament.

“We will never accept (the new government) – no matter how long we have to remain in Islamabad, we will remain there,” Khan said in the northwestern city of Peshawar.

Khan’s party, Pakistan Tehrek-e-Insaaf (PTI), has asked its supporters to march peacefully on Islamabad on May 25 to call for the dissolution of parliament as well as free and fair elections.

In a speech, Khan urged authorities not to oppose the march, which will gain strength outside of Islamabad before heading to the city centre.

There, he says his supporters will remain until parliament is dissolved and new elections are called.

The former prime minister once again blamed the United States for being behind the regime change because he chose to visit Moscow on February 24, the day Russian forces entered Ukraine.

The Pakistani military, the White House and the US State Department have denied the allegation.

Khan describes the march on Wednesday as a move to protect the country’s sovereignty.

The current government of Prime Minister Shehbaz Sharif is attempting to tackle the political, economic and constitutional crises the country has been facing since Khan was removed from office on April 9.

Khan, who had lost the support of allies and some party members who defected to the opposition, refuses to accept anything less than fresh elections.

Khan came to power in 2018 promising to eradicate corruption and revive the economy.

He has been able to draw huge crowds at rallies since his removal from office.

with reporting from AP 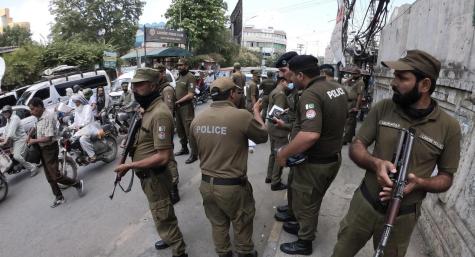