A book of revelation: PM’s foreign policy vision is discovered amid the rubble

The author's attempt to describe a golden age of Australian foreign policy under Scott Morrison pushes a few limits.

When you set out to argue that Scott Morrison has a consistent and long-term foreign policy approach, you’re setting yourself a high bar. Scomo truly enough said that his instincts had “always been domestic”, and just about his first pronouncement on worldly matters was that the Australian embassy in Israel should be moved to Jerusalem (during Dave Sharma’s campaign to regain Wentworth). This policy had been a wholly American obsession, but ScoMo went there anyway, causing uproar among our Arab friends. Not bad for a first outing.

Paul Kelly acknowledges that ScoMo has a talent for disaster, but that doesn’t deter him from searching for Morrison’s mission — a project which leaves one with the feeling that it has been written with a specific form and conclusion in mind, one which could then not be found in the material.

Ten years ago, Kelly wrote a paper for the Lowy Institute titled The Howard Agenda, concerning the foreign policy of a man who came to personal and political maturity as a conviction conservative during the Cold War and was prime minister during the last period of unquestioned dominance by the US.

It was to be expected that a consistent, reflective, thought-through foreign policy could be found. Morrison’s Mission is an attempt to do the same with a Gen-X, former child TV actor, happy clappy tourism industry flak and inner-party factionalist whom many Australians believe to be a fantasist or a pathological liar, at a time when the US, our oldest ally, pitches four-yearly between isolationism and renewed multilateralism, and our essential trading partner is also our civilisational enemy. 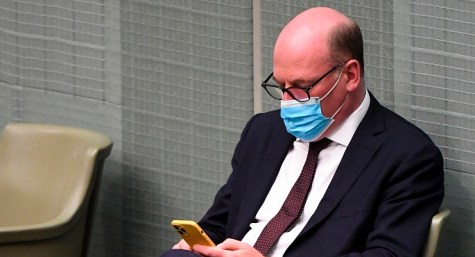 There is substantial evidence against. The whole middle of Kelly’s book on ScoMo’s allegedly deliberate foreign policy concerns his shift towards a careful but principled stand against China’s authoritarianism and regional dominance, all done in the Australian national interest — and in the meantime, Morrison, at the dispatch box, accuses the opposition leader of being a Chinese agent and his deputy a Manchurian candidate.

Those events would matter less if Kelly were not so intent on constructing a form of authorship of the past three years of Australian foreign policy and attributing it to the planet-sized brain of the prime minister.

“From the beginnings of his prime ministership, Scott Morrison was driven by the dynamic of a world being transformed,” Kelly writes.

Does anyone without a book to put together believe that? From the moment he was installed by his party, Scott Morrison appears to have been driven by tactics alone on the domestic front, let alone in the field of international relations.

I suspect that even those who will vote unhesitatingly for him in the forthcoming election will not be doing so for his strategic vision.

Morrison came to power in 2018, at a time when the post-1991 global system was truly breaking down. China had turned from an inward, authoritarian form of state capitalism to a globally projected, nationalist neo-Stalinism; the US, under Donald Trump, was juddering between crude protectionism, NATO refusal and weird attachments to the planet’s most cartoonish dictators. Trump had cancelled the anti-China Trans-Pacific Partnership, and Asia was in disarray.

For decades, our crucial trading partners had been our allies. Now there was a major disjunct between trade and security.

This was a time when we needed a prime minister capable of stepping back from the fray and speaking after careful thought. What we got was a government willing to moralise to China without being in a position to back it up, from the unilateral call for a global inquiry into China’s handling of the COVID-19 virus to the Pacific “step-up”, in which we “warned” Pacific nations that China’s investment in them was self-interested (so unlike Western investment!) to chivvying away on human rights, as we continued to ship iron-rich chunks of the continent their way. 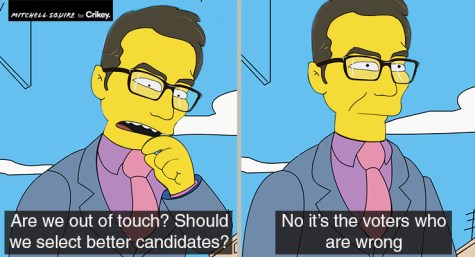 NSW was going to be Scott Morrison’s buffer. Now it’s about holding the line

China responded by selective and sudden tariffs on specific products such as barley, quite possibly chosen with reference to Coalition marginal electorates.

Kelly is more than willing to acknowledge that Morrison’s approach has been blundering in particular, but he argues there was a long-term intent:

“Morrison’s China journey from 2018 to 2021 was a wild ride. Along the way there were road bumps, improvisations and diplomatic mistakes, but long run strategic intent,” Kelly writes.

You coulda fooled us, many will say.

Kelly does not spare Morrison or his government for their blunders, but his claim to an actual direction relies on his having interviewed those around Morrison and on a single long interview with the PM himself. But that’s where it gets murky. Throughout the book, Kelly claims thoughts on behalf of Morrison whose provenance is unclear: “the Quad offered some of the best insights into Morrison’s thinking. He wanted more collaboration from regional nations…” But is this something Morrison said in his interview? A surmise by Kelly? Nothing appears in the footnotes, so how does he know?

So it occurs throughout. Kelly’s basic rhetorical strategy is to make Morrison the reflective author of this drift in approach to China. But he presents very little evidence for that. What his scrupulously evidenced record of the period indicates is initiatives by the Department of Foreign Affairs and Trade, diplomats, senior staff, “old Asia hands” and so on, all pushing and pulling on the government, as the latter sought to keep channels open with China.

It is far more a picture of a government moving by responding to internal pressures and forces, something far more characteristic of Morrison than any big picture.

Crucial to the notion of a long-term strategy is what seems to be Kelly’s attribution of AUKUS, and perhaps of the whole Indo-Pacific strategy, to Morrison. Is there any real evidence for this? Every sign is that the Biden administration was orienting to such a strategy after Trump’s lack of direction, and the sudden departure from Afghanistan was obviously a clearing of the decks for the new strategy. It seemed clear that the US lined up the whole thing, with Europe (that is, France) as much a target as China, and assigned Australia a role, which we were glad to take up.

Kelly’s treatment of AUKUS is underdone to the point of distortion. His focus on the submarine point of the deal misses the crucial cyberwar dimension of it, which would necessarily bind our forces into a single US-led command, the basis of Paul Keating’s and ANU academic Hugh White’s criticisms of the deal — which Kelly then constructs as “emotional”.

Bewildered by the time lag of the submarine deal, Kelly has not read around enough to twig to the point made by UNSW academic Clinton Fernandes and others: that nuclear-prepared Australian ports can then be used by US subs, and that is the purpose of nuclear “sharing”. The Aussie subs themselves are on the never-never.

To many watching daily politics it will seem that the true Morrison is the man behind the cheap shots about Manchurian candidates: the parochial, Sydney-swaddled Christian cultist who is spending much of his time focused on waging war in the NSW branch of his own party right up to the election, rather than on any fancy-schmancy mission that would be of any help in a world suddenly engulfed in war.

This is Kelly at his most indulged and least self-aware. For the past decade or more, he has been looking to Australian politics and politicians to find something more than is there. The process that he mapped in The March of Patriots, to the end of 2007, delivered a country that did not live up such epic hopes: a thoroughly atomised society, in which public passions — whether of left cultural nationalism or right patriotism — have been transmuted into privatised lives and a few motifs in sport, Woolies Anzac Day ads and crackpot shambles like One Nation. Such a culture gets the politicians that reflect it, through a cracked glass.

One telling moment in this book is Kelly’s attempt to link Morrison’s present to his Australian ancestral past and his admiration for Captain Cook. But as anyone who has heard ScoMo bang on will attest, it’s not Cook he really admires but James T Kirk of the Starship Enterprise (whom Star Trek creator Gene Roddenberry modelled on Cook).

Why? Well, Star Trek was compelling to most Gen-X kids — but especially to one being raised in a suburban cult church by his mayor/cop dad. ScoMo’s reverence of Cook has been added later, I have little doubt.

Kelly’s selection of it shows that he yearns for a division of the trivial and serious, the tactical and the considered, which has now mostly dissolved.

The strangeness of it all is that the book is a useful-enough account of our foreign policy shifts of the past few years, once Kelly’s blindspots are allowed for. “For Biden, climate change is an act of faith,” Kelly writes. C’mon, Paul, you’re better than that. Denialism is the act of faith.

Kelly, like many in the mainstream commentariat, has little scope to assess the actions of our leaders in terms of their lack of reason. Given the selection we’ve had recently, that seems like a lack of imagination. Maybe that bit about the embassy in Jerusalem was ham-fisted electioneering. And maybe it was because it’s in the Book of Revelation. 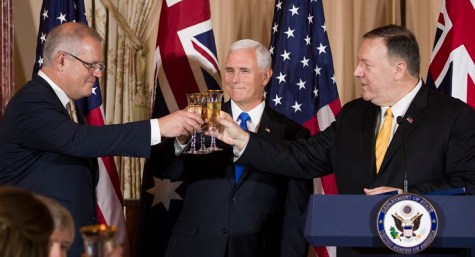 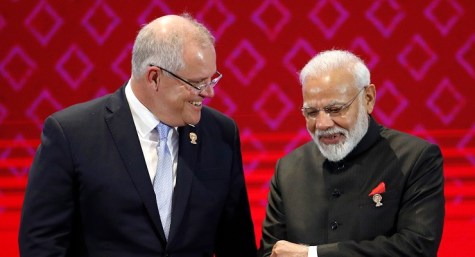 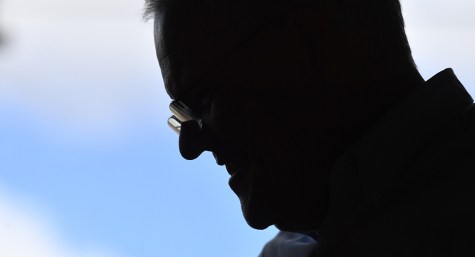 Rundle’s critical analysis of Kelly’s sad spin is tempered by an equally pathetic regard for Kelly ‘s … legacy? He states that Kelly is ‘better than’ his reactionary denialism. As if Kelly wasn’t a rusted on conservative who’s spent what feels like centuries at The Australian, not to mention that other bastion of rational reportage, Sky News. That Rundle ascribes Kelly with some kind of serious journalistic standing speaks volumes – unfortunately.

Ah, that’s who Paul Kelly is, just as well I had no idea because I was very unlikely to buy a fairytale book about Morrispin anyway.
What could possibly be in such a book that I, or anyone really, would even consider paying good money to buy? NADA.

When it comes to long-term vision,
revelations of a “mission”,
there is only one direction,
and that’s found in Scott’s reflection
in the mirror, with it’s story
of his quest for fame and glory.

Bob the builder
Reply to  Gazza

This is why I persist with the continually more disappointing Crikey.
Still the best comments section anywhere!

It appears I will find it in the Fiction section if I have time and money to waste.

“Tale of two China’s”Do youse guys employ a sub-editor at all?

Nope, that is long & well established.

Great piece, thanks GR. I never bother to read The Oz or Paul Kelly though I have friends who do – not out of regard for his work but “to know what the other side is thinking”. So I am really grateful to have such a thorough review without having to plough through the essay and check its claims.

Thanks to Crikey too. These regular reviews by GR are very useful to readers like me.

“I never bother to read The Oz or Paul Kelly”

Can’t fathom why ANYONE would bother.

I love their paywall- impossible to accidentally read the Newscorpse propaganda. Anyone remember their US Iraq commentary – “you’re ever for us or against us”. So much for democracy!