Ahead of the 2022 budget, the government has been interrogated in the Senate on its commitment to gender equality, closing the gender pay gap, and reducing violence and harassment against women.

Forget national apologies and soft interviews with Jenny Morrison. The Coalition has a real opportunity to prove it cares about women ahead of the federal election: the budget.

The government has been grilled on its commitment to gender equality in a Senate estimates hearing, with Minister for Women Marise Payne and Workplace Gender Equality Agency director Mary Wooldridge questioned in a rapid-fire 45-minute session.

A key area of concern was the 2022 budget, set to be released this month. While the 2020 budget was slammed for being “paltry” and “tokenistic” for women following COVID-19’s devastating effects on the economy — with many women on the frontlines in the care economy — the 2021 budget was a huge improvement.

In 2020, the Coalition’s line was that women also benefitted from the budget because they too accessed tax cuts (though, due to lower average earnings, benefitted less than men), were aided by business cash splashes, and used roads.

They wheeled this line out again on Sunday, with Treasurer Josh Frydenberg citing previously unpublished data showing young women benefited the most from tax cuts. “Young Australian women aged between 25 and 34 have seen the amount of tax paid decline by 15%,” his office said, adding that changes to childcare will also boost the disposable income of Australian women.

Greens Senator Larissa Waters asked whether this year the government will produce a gender-lens analysis of the budget. The women’s budget statement, which examined how budget decisions affected women, was abandoned in 2014 by former minister for women Tony Abbott and has been replaced with a “glossy document” — a supporting statement outlining impacts. Waters called for a gender-lens analysis instead of “working out what it means after the decisions were made by mostly a bunch of dudes”.

What about the gender pay gap?

In questioning Frydenberg’s line about tax cuts for women, Wooldridge was asked about measures taken to support the systemic drivers of the gender pay gap. Forty per cent of the gender gap is due to participation in the workforce, with women entering lower-paid roles and taking time out of work — often for childcare — while the other 40% is due to bias and discrimination.

There’s been a fractional improvement in the gender pay gap, but things still aren’t good: for every $10 a man earned, a woman made about $7.72, as found by the latest report by the Workplace Gender Equality Agency (WGEA). Women typically earn about $25,000 a year less than men; men are twice as likely as women to earn more than $120,000 a year; and more than 60% of women are employed in part-time or casual roles.

Wooldridge said WGEA hadn’t spent much time working in policy but hoped to in the future, and said that the office would focus on working with companies to facilitate the economic participation of women.

The government, she revealed, doesn’t collect data on how many contracts it procures from women-led businesses.

Australia ranks 50th out of 156 countries on the 2021 Global Gender Gap Index, falling from 15th place in 2006. Australia also fell from 12th place in 2005 to 70th in 2021 for economic participation and opportunity, though ranks first for educational attainment for women.

And on reducing violence and harassment?

A report into former education minister Alan Tudge, who has been stood aside, was handed to the government 17 days ago, with no action taken. The report looks into his conduct following allegations he was abusive to former staffer Rachelle Miller, who was in a consensual romantic relationship with him. Miller alleged Tudge was emotionally abusive and on one occasion physically abusive, kicking her out of bed. Tudge denies the allegations and will contest the next federal election.

The investigation report was hand-delivered to Scott Morrison on January 28, a Senate committee heard, because it was “particularly sensitive”. Miller declined to participate in the inquiry. It’s unknown whether it will be made public.

In a historic speech at the National Press Club last week, Grace Tame and Brittany Higgins called for more action on violence against women and children. Tame said the government needed to engage in conversation with survivors, expand formal and informal education on the grooming process, and provide a “consistent national framework that supports survivors and their loved ones, not just in their recovery, but also to disempower and deter predators from action”.

Payne was asked in estimates whether she believed the funding levels were adequate.

“I don’t have all of the state and territory funding arrangements with me this evening,” Payne said, but added the funding would be reviewed based on demand and abuse.

The government has faced criticism for the new National Plan to Reduce Violence against Women and their Children, with advocates saying the plan lacked clear, measurable targets.

Payne couldn’t say whether the targets would be revised, whether the draft would be made public before the election, or whether consultation reports guiding the draft, produced by Monash University, would also be publicly released. 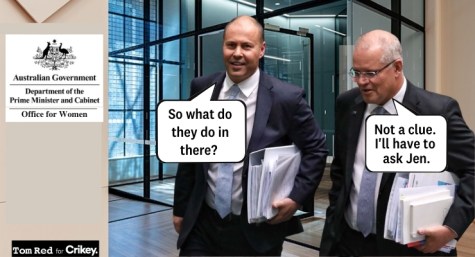 Get Fact: do men make much more than women for the same job?

Both major parties pretend to be sooo passionate about doing something about abuse and violence toward women etc, but one of the main causal problems seldom discussed by libs or labor in the entire spousal and/or children abuse debate is the social and affordable housing issue.
From my reading social housing shortage in NSW alone is about 50,000 with a waiting list in almost every town of over ten years. Affordable housing is around 200,000 short of demand in NSW. Imagine the stress in low income households with many weekly rentals in excess of $1000 a week!
The solutions aren’t difficult, but we know the libs have no policy and labor’s policy is next to useless.

“Forty per cent of the gender gap is due to participation in the workforce, with women entering lower-paid roles and taking time out of work — often for childcare — while the other 40% is due to bias and discrimination.” I count only 80% in this sentence. Have I misread it? What accounts for the other 20%?

Sorry Marise, you have cruised on the public purse of being a minister for too long, I am unaware of your “wins” of being a minister, but to tell the estimates committee;
“I don’t have all of the state and territory funding arrangements with me this evening,” suggests she is coasting

Time for the return of the Suffragettes .Women may have the right to vote but in the parliament of the nation, they are treated as second class citizens and subjected to abuse . All power to the ” voices of” women.

The Pankhurst’s were not keen on the lower orders having the vote at all and were concerned that only women of the right type had the vote so that iconography is somewhat tarnished.

If there is to be any real change in the social intercourse between women & men it would be better addressed with a Lysistratan League, with a Tamar as strategy consultant.

A Judith & Jael youth wing for ‘the street’ would help even out any bumps.

“Grace Tame and Brittany Higgins called for more action on violence against women and children.”

Fear not, the ‘government’ is on it – trying to push through appalling laws allowing for the deportation of all evildoers. Because we know that no Australian would ever hurt a woman or a child. It’s all those pesky foreign gens.

Ever more desperate and deranged ‘government’ with no limits as to how low they’re prepared to stoop to hold on to power. The simplest solution – actually doing their job and trying to really solve the problems facing us – never ever crosses their mind.

Just doing basic good government would be so much easier and require far less energy than is devoted to doing evil.

It would be funny if it all wasn’t so tragic,disgusting and transparent – perhaps the only thing the Coalition has been transparent about. And “if it wasn’t” should read “if it isn’t so….” as it is (and has been) ongoing for such a long time that it’s obvious the Coalition knows the MSM is not going to hold them to account. And the election hasn’t even been declared yet.