How to fix democracy

Jo Dyer made headlines last year after advocating for her friend Kate, who accused former attorney-general Christian Porter of raping her during their high school years. Porter strenuously denies the allegations.

Dyer’s pressured the government to address her late friends’ allegations and hold a proper inquiry. Disheartened with the government’s poor response and years of inadequate governance, she’s decided to fight from the inside, running for an Independent candidate of Boothby as part of the ‘Voices Of’ movement.

Crikey’s Amber Schultz was joined by the arts powerhouse and independent candidate to discuss her new book Burning Down the House – the story of how our political system went awry, ranging from Morrison government’s many embarrassing moments and rapid moral decline to Labor’s inability to act.

Dyer is an advocate for compassionate, humane and moral leadership, canvassing the rise of Independents and the importance of responsible and honest candidates.

If you would like further reading, feel free to check out – Jane Caro adds her name to the political candidacy list. Why are women stepping up now?

Subscribers can log in to watch the full 1 hour conversation.

Associate Editor @AmberMaySchultz
Amber is the Associate Editor at Crikey. She has been shortlisted for two Young Walkley Awards, was the 2021 Mumbrella Young Writer of the Year for her coverage of sexual violence, and in 2018 completed the Jacoby-Walkley scholarship. She holds two Master degrees and previously worked for The Age, Nine News and ABC's Tonightly.

Boothby Independent Candidate @instanterudite
Jo is an Australian theatre and film producer, and director of Adelaide Writers' Week. She is known for the films Lucky Miles and Girl Asleep. A former Labor preselection candidate, she is currently running as an independent candidate for Boothby at the 2022 federal election.

Burning Down the House tells the story of how our political system went awry.

Debunking the notion that we’ve ever had a two-party system, it examines how—with a recent dance card that has gone way beyond Labor and Liberal to encompass the Nationals, Greens, Centre Alliance and a whole host of RWNJs—Australia has now arrived at a place where a group of the most unlikely politicians contemplated the sort of Australia they wanted—responsible, humane, moral—and concluded that was not the Australia reflected in our current toxic politics.

Into the breach has stepped a range of independents beholden to no-one but themselves and their electorates, ordinary Australians determined to burn it all down and build something new. 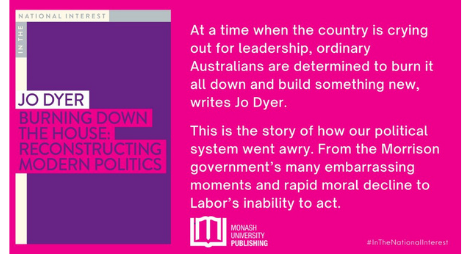 Be a Crikey Talks guest