'Today we pause to pay our respects to those who have gone before us. Our mothers. Our fathers. Our uncles, aunts, our grandparents. Our old people, our ancestors, who we are of.'

Lake Wendouree on Wadawurrung Country is still ink-black as they arrive, winding around the water’s edge toward a small stage under a white tent, a beacon in the pitch-dark, alive with hushed chatter and the hypnotic pulse of a didgeridoo. It’s a big, diverse crowd — around 1000 people — enough to fill the limited seating many times over, the crowd sprawling back from where the seating area ends.

Ballarat’s third annual Survival Day dawn ceremony starts with dancers wreathed in smoke that glows white and gold under the lights. Then, a moment of silence. “Today we pause to pay our respects to those who have gone before us. Our mothers. Our fathers. Our uncles, aunts, our grandparents. Our old people, our ancestors, who we are of,” MC Belinda Duarte, a Wotjobaluk and Dja Dja Wurrung woman says. “As a collective, let us to pause for a moment of silence, to listen, to reflect, and to consider the experiences of them.”

The silence that follows is punctured only by bird noises and the rumble of the cool morning wind past the microphone.

Duarte takes a long, shaky breath before she is able to speak again. Behind her, pale blue dawn hauls itself over the silhouette trees lining the lake. She talks about the emotion of January 26 for First Nations people.

“So when people stand with us in that pause and silence,” she says, tears scratching at the edges of her words, “sometimes it’s a presence that is stronger than words can offer.” 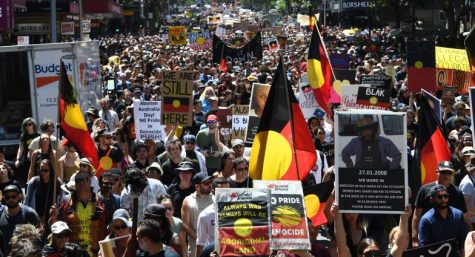 The tone of the event is warm, emotional and familiar — survival and what was survived elicit in turn great pride and bone-deep sadness. The speakers hug Duarte before and after speaking, frequently for a long time.

Narungga woman Deb Milera has to take several breaths to summon her strength before commencing, and will later confess that while she wrote a series of notes for her speech, the majority came “from the heart”. She gives a variety of testimonials from her family about what the day means to them. It is a diverse group with a diverse range of experiences — “non-Indigenous in-laws, people affected by past government policies who grew up in orphanages, separated from their families and country” — and their views are equally diverse. But, Milera says, they share common themes: “sadness, anger, hurt, pride, hope and resilience.”

She ends on a note of optimism: “Walk beside us, not in front of us, and we’ll do deadly things.”

Duarte gives her a meaningful look as she departs the stage. “Beautiful, Tidda.”

Then there is Wotjobaluk man Dylan Clarke of the Barengi Gadjin Land Council. He spoke about the exhaustion of the process of making a claim to the land that was stolen from you, the number of laws Indigenous groups need to understand and navigate.

“The rigmarole of government procedures we have to go through, just to be recognised by white man law. Take a moment to consider that,” he said. “We have Native Title, we have Registered Aboriginal Parties, and we Traditional Owner settlement acts. We have to be versed in all that to activate our rights as Aboriginal people.”

He is followed by a trio of remarkable young people — Jack, Craig and Indya, who are clear and direct about what January 26 means to them. Indya quotes an Aunt:

I have seen the result of history. There are ripple effects big and small … Just because I didn’t walk in the shoes of my great grandmother, grandmother or mother, it doesn’t mean I don’t feel their pain. It runs in my skin and heart … I want our nation to stand with us every day of the year. I have hope. There is a long way to go but here is where we start — by connecting to one another.

Sarah Jane Hall, a Narungga woman with Celtic ancestry, sums up the tone — sad, reflective, amazingly free of rancour — when she says “today is not a protest, but it is also not a day of celebration”. She goes on to list massacres inflicted on Indigenous people across the country between 1788 and 1930. With each story a faint hand print of crimson ochre is planted on a kangaroo skin behind her.

By the end of her speech, it is speckled all over. On and on it goes, hundreds and hundreds murdered. Stories of body parts taken as trophies, mass poisonings, bodies displayed as a warning, women and children killed in cold blood and events conducted with the implicit or explicit backing of the state. Hall breaks down only once during this awful litany, somehow.

It exposes the irrelevant sophistry of the “Be grateful it was the British” argument put forward this week in The Australian (“The greatest failing of Australia’s founders was naivety …”). But as Milera said earlier, “we’re moving closer to being honest about that history, which is really important”.

And it is true that the usual heat appears to be slowly draining out of the debate around Australia Day. When a site like news.com.au is arguing the date is not one to celebrate, something has shifted. In a battle of popular influence between the Brisbane Lions and a posting-poisoned political hack like Matt Canavan, there is only going to be one winner.

Hall finishes with a pointed and shattering “Lest we forget”. Official Anzac Day celebrations have had a habit of eliding Australia’s first ever war.

Various speakers touch on the severance from family and country represented by the Stolen Generations, and the apartheid-like conditions of state “protection acts”, but it would take a much longer event to take in the further destruction wrought by imported diseases, the introduction of alcohol and tobacco, or the hundreds of millions owed in stolen wages.

There is a grave in the Ballarat cemetery dedicated to “Frank, the last of the Ballaraat Tribe of Aborigines”. The death of Frank (whose Indigenous name was Mullahwallah) in 1897 elicited a maudlin response from white Ballarat society at the time, according to historian Janice Newton. The Wadawurrung man was treated to a grand funeral and glowing newspaper coverage. It was a way, she writes, “to wipe out reminders of the usurping of the Indigenous people that remained fundamental to the accumulation of colonial wealth”. It also muddied the waters of responsibility, presenting Indigenous Australia as a people dying out, a regrettable but inevitable and now irreversible process.

Every part of that logic has been exploded by years of Indigenous resistance, from the 1938 day of mourning to the 1988 bicentennial “non-celebration” (Mullahwallah’s grave was a site for one such event) to Survival Day dawn services, Invasion Day protests and much more besides.

Torres Strait Islander mother and daughter Deborah and Mercy close proceedings, with Deborah acknowledging “the country that lies beneath what was placed here by, well, the first boat people, who never left”. They perform a song, partly in English and partly in the Meriam language. They trade verses and when Mercy sings, it rings out like a bell: “My mother told me, listen to the birds every chance you get”.

Finally there is the smoking ceremony, attendees spiralling around a small fire and bathing themselves in the undulating cloud it creates.

The smoke billows out over the lake, smelling of pepper and honey. It thins, but doesn’t quite disappear, against the pristine morning. The scent spreads through the surrounding streets in all directions. It’s part of the air now, there even if you can’t see it. 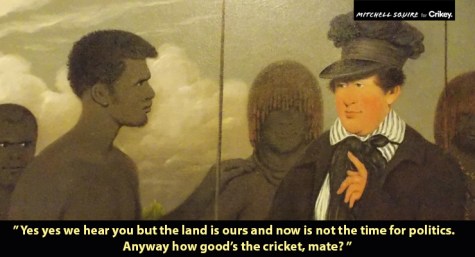 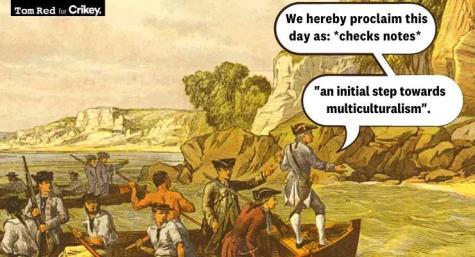 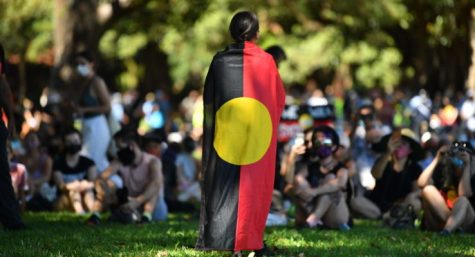 Rallying around a cause

Beautifully written Charlie, I wish I had been there.

Well written. In addition to disease, alcohol and tobacco, you might want to add sugar.

Beautifully written and evocative. Thank you. I’d like to think that the conversation is moving in the right direction. I am finding it very difficult to get my head around the discussions about constitutional recognition, treaties, sovereignty, and land rights. The arguments for all the competing positions are so well argued that I find myself at varying times agreeing with them all. And I don’t think that we need to keep endlessly discussing. Surely there has to be some action soon.

One walks in the shadow of those that came before. And on this day, January 26, 2022. Invasion Day / Australia Day. A line has been drawn that can no longer be ignored or dismissed.

The essence of a cultural history exists within association, memory and identification of the self. And all those related that came before. A human acknowledgment of past, present and future. It is both inclusive and exclusive and exists for both an individual and/or social communal identification.

Culture brings together and separates from.

Indigenous Australians claim of ‘Survival Day’ over ‘National Australia Day’ has drawn a line? The Australian Nation, all cultures, associations together, tasked to identify one national, communal space where-in all Australians accommodated, included. Australian Indigenous have claimed their space. And who would contest their need?

But so too, is a need for all Australians to stand as ‘ONE’.

the continent of Australia is the only continent that has been separated from the rest of the land masses – and inhabited by a all the arrivals – the aborigines found by Captain Cook were the group who had displaced the original inhabitants then came the convicts ,Irish, etc and everyone keeps coming to make this place a vibrant continent – we don’t need constant gnashing of teeth about the past – some should give all these a copy of the Rubaiyat of Omar Khayyam

Perhaps provide a translation for those that don’t get it

I call BS. It’s an excuse for attempted genocide.

I suppose you’ve evidence of murder, child stealing, poisoning and land theft carried out by the supposed group who were here before Cook? I thought not.

Oh deary me. Been reading Quadrant, have we? The ‘they displaced the original inhabitants’ argument is so specious, so unsupported by evidence, so irrelevant that I cannot believe that people still have the gall to spout it. Still, I suppose if the Omar Khayyam is your literary reference point, we can’t expect much.

Did you just make that up?

The DNA evidence is that the gracile form is earlier than the robusta.
They were contemporaneous in the remains of Lake Mungo & Kow Swamp.

Maori legend refers to the indigenous of the north island as small, extremely hirsute (recalling the Ainu of Hokkaido) who dwelt in caves.