The highly principled people making the rules at TA clearly know stuff we mere mortals do not. Here's cheers to them.

Tennis Australia wants everyone to know that “Peng Shuai’s safety is our primary concern”. That’s why officials at the Australian Open tournament confiscated a banner and forced two fans to remove their T-shirts on which were printed the words “Where is Peng Shuai?” For her safety. Bless.

The ban on T-shirts has now been reversed (after this story was first published). Crikey is happy to take some of the credit. But according to reports, banners will still be barred due to “safety concerns”.

Peng, you’ll recall, is the professional tennis player from China who disappeared from view for months after putting a post on social media accusing a senior government official of sexually assaulting her. When she reemerged, it was to deny that she had ever made the accusation, and she appears to remain under some form of indeterminate house arrest.

The Women’s Tennis Association declared late last year that it will hold no tournaments in China during 2022 in protest and solidarity with Peng. 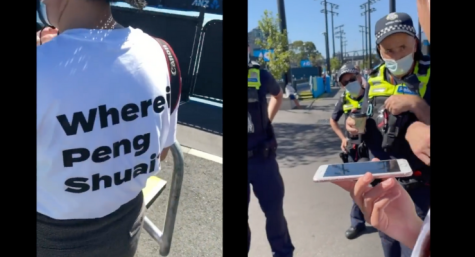 As for Tennis Australia, that famously principled organisation which only two weeks ago put a nuclear missile through its own credibility by its part in the multifaceted Novak Djokovic debacle, its sole concern is Peng’s safety.

Which is why its security officer demanded the initial T-shirt removal and called the police when asked why.  It’s why the police officer explained that “Tennis Australia sets the rules here”, and TA later confirmed that its rule is “under our ticket conditions of entry we don’t allow clothing, banners or signs that are commercial or political”.

So you can see its point: its priority was ensuring Peng’s safety, and the best way to achieve that was to not allow commercial or political signs to be on display at its tournament (at which Peng is not playing, see above).

OK, you’re now saying, hang on, commercial? Isn’t the Australian Open literally bathed in commercial signage, including on the clothing of every player? True. However, that signage has been pre-approved by TA, having passed its stringent test to ensure that it will not compromise Peng’s safety.

For example, one of the major sponsors of the Open is Guojiao 1573, a Chinese alcohol company. Its advertising, which you can’t avoid seeing if you tune in to the tennis, will definitely not hurt Peng. The same cannot be said for commercial signage which TA has not vetted. That way lies danger. For Peng.

Maybe “Where is Peng Shuai?” is not a commercial message but a political one. Isn’t it, as Martina Navratilova angrily said, a human rights statement? Well, as George Orwell helpfully once said so that we could quote him out of context, all issues are political issues.

Anyway, the security guard and the police officer concurred that the message was political, so the real question is: why is it necessary that TA prohibits such things at its tournament? Which brings us back to its primary concern: Peng’s safety.

Again, I see its point. It is true that the Chinese government is famously lacking a sense of irony, humour, proportion or the ridiculous, and would be very unhappy if a random citizen of another country was to wear, in public, a T-shirt — or hold a banner — querying the whereabouts of its once world No. 1-ranked female tennis player and current apparent hostage.

We can only assume that Tennis Australia’s concern is that, if it allowed such shenanigans to go unchecked, China might take it out on Peng. That risk cannot be countenanced.

Thus we have the spectacle of TA doubling down on its, well, somewhat fascist disdain for basic notions of free speech, telling us that it has no choice because its no-commercial-or-political-words rule (and now “safety concerns”) is the only thing standing between Peng and a firing squad.

Hyperbolic? Who’s to say? Tennis Australia clearly knows things that we mere citizens do not. We should just be grateful that it’s on the watchtower, safeguarding Peng’s safety by ensuring that the only messages the TV cameras ever see are the ones whose owners paid for the privilege. 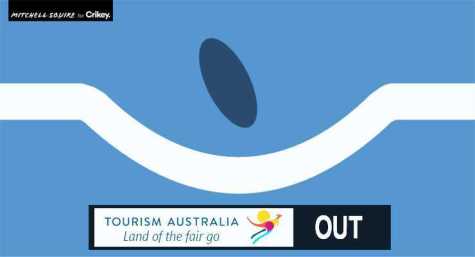 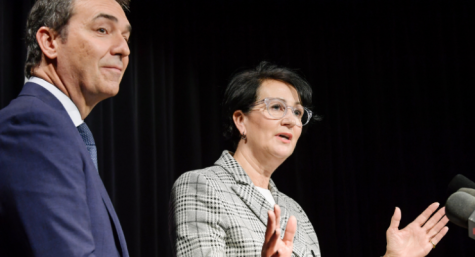 a T-shirt querying the whereabouts of its once world No. 1-ranked female tennis player

Whoa there Michael, let’s not get ahead of ourselves. Her #1 rank was in doubles in 2014. Or she was the #1 ranked Chinese women’s singles player around the same time. Take your pick (but not what you wrote).

You could argue China is just taking a leaf out of Australia’s book: we lock up asylum seekers for their own safety.

A branded T shirt is a commercial. A flag, especially an aboriginal flag, is political. A shirt with an “end racism” slogan is political, but in a socially acceptable way.
Shall we have some intelligent discourse about the southern cross flag, my favourite? When did that become the rally point of the rabid right?
The police acting as private security? Yeah nah. That’s so many wrongs just right there.

This is the New World Order folks. Your either with it or against it.

We were schwabbed last year because of a bust travel agent needing an income so may one assume the same motive for the constant slabs by this writer?
Who in the right mind would seek him out for legal help?

Well-put Michael. TA can bluster all they like in their defence, but God forbid tennis gets “political”.