It's not standard procedure for a PM to receive a red-carpet welcome at an airbase. But that didn't stop ScoMo.

Scott Morrison’s photo op during an airbase visit — which went viral after people noticed an unusual red carpet welcome from an honour guard — was preplanned and broke with normal protocol, according to internal Defence emails.

The prime minister posted an image of himself visiting the Williamtown RAAF Base to virtually attend the national cabinet on his Instagram on May 7.

Emails obtained by Crikey under freedom of information laws show Australian Defence Force staff coordinating Morrison’s visit to the base, including correspondence with the prime minister’s staff.

It reveals that Morrison’s staff planned the photo opportunity, while also showing Defence staff scrambling to explain why the guard departed from normal VIP treatment once it went viral.

The first email about the visit comes from the secretary of the Department of Defence’s executive assistant on May 4, thanking the recipient for taking their call and confirming the details of visit.

Later in the email chain between Defence staff, one mentions the greeting arrangements for Morrison: “If arriving by Air and landing at Williamtown, VIP will be met by appropriate senior personnel at the plane stairs and escorted to the meeting venue.”

The next day, an email with the subject line “Urgent Ceremonial Support Request – Fri 07 May 21” is sent from an RAAF Williamtown warrant officer asking for 13 staff “to enable a Stair Guard to be formed”. A later email to staff chosen for the stair guard tells them to dress in tunic and medals, while also asking women to wear trousers rather than a skirt.

There is no reference to the red carpet in the emails, and the only references to the honour guard come from ADF staff, corroborating Air Force chief Mel Hupfeld’s answers about the visit during Senate estimates.

On Thursday, May 6, an advancer — a staff member who visits a site prior to a visit — from the Prime Minister’s Office emails Defence staff about the next day’s visit with a schedule and list of names of those attending. In the runsheet, 10 minutes is set aside for “Photo opportunity alongside runway”. An internal Defence visit program also sets aside 10 minutes for “possible photo opportunity weather permitting”. 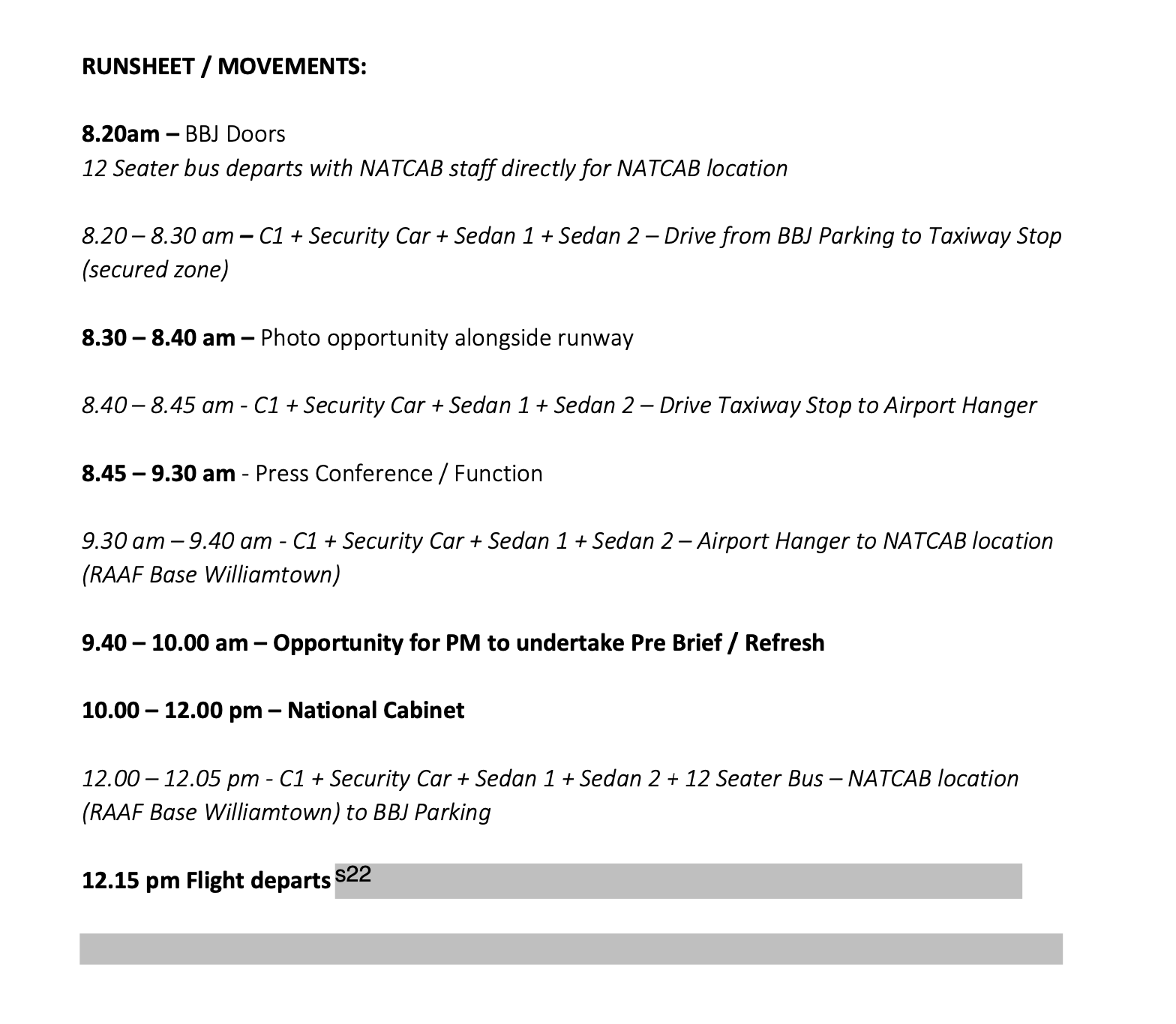 Straight after the visit, Defence staff send around emails patting themselves on the back for the visit.

“Some lovely feedback from [Senior Australian Defence Force Officer] for our team’s support to the PM’s attendance on base and in the [Len Waters Building] today,” an email said. “[Redacted] from the PM’s office was also very grateful for our support.”

It’s only on Sunday that an Air Force senior digital communications adviser raises the alarm: “There has been some discussion on social media over the weekend — most of it on Sunday — regarding an image the PM posted to his Instagram Stories of him arriving at RAAF Base Williamtown walking on a red carpet.”

An RAAF Base Williamtown group captain replies, claiming that an honour guard is typical but one aspect of the greeting breaks from normal protocol: instead of using the prime minister’s normal security staff, the doors were opened by ADF members.

“Normally his protective security team open his door but potentially because it was on base and fully secured they may have allowed our door opener to do it. I will see what I can find out,” they wrote.

And while this moment and its surrounding controversy may be a blip in Morrison’s stint as prime minister, the photo opportunity will be saved for future generations to remember in ADF archives.

“Please find attached a link to the imagery gathered during the PM’s visit to Base earlier this month. Please download for Unit History records,” an Air Force Imagery Specialist wrote in an email sent later that month.

Yes, where’s the bible in his right hand. So frustrating, that Hungary and Poland are already taken, and he has to settle for Crusader Emperor of Australia instead.

Exactly. Scottie’s not responsible for this. It was divine intervention. So watch your step.

On the bright side the ADF did draw the line at the PMO’s request for a sedan chair and 4 well oiled, briefly attired airmen to be waiting at the bottom of the fight stairs. But the rose petals? Oh sure no problems there sir. I’ll personally scour the base for any potential Vestal virgins to help with their dispersal.

Been Around
Reply to  TJS

It was May. Masks were not required under the gold standard of the time.

Lord of Logorrhoea
Reply to  Been Around

What I find most offensive about Morrison is his constant referencing back to US culture and practice. I suspect he has never watched Australian-produced TV, or otherwise engaged in Australian cultural life.

His homage to US culture, including baseball caps, thanking veterans for their service and so on is capped by his devotion to a US religion that entirely meets his personal needs via the prosperity gospel.

You’d expect him to grasp his left breast with his right hand too. But then again he’s heartless of course so unable to pull off that comic act in the “‘Merican Way”. He does do “murkles” though like any good American acolyte, remember that election result!

Unfair reference to the Simian world for mine.

Exactly, it’s ‘optics’, what Australians have been nudged into over the past two decades in being subjected to every form of US GOP ecosystem political media based PR to enact same or similar radical right libertarian policies, avoidance of climate science and environmental constraints has been the obvious one (vs. ‘khakification’ and wherever possible having administrative PS personnel in uniforms), while everyone ‘amuses themselves to death’ (Neil Postman).

It’s a form of autocratic radical right libertarianism that most people would or should hesitate in supporting….

The optics, plus fear over imagined threats transmitted by legacy media, is more about ageing monocultural and less educated conservative cohorts i.e. promoting authoritarian imagery whether borders, Covid etc.; trying to spook their own and persuadable voters into voting against their own (or at least coming generations’) interests.

How come the look of things are usually slightly skewed? Is it the PM himself or is it a member of his staff? Does that PM really believe that he is ordained by God and therefore is due special boosting? It is all a bit of a mystery really.

Well, if you read what he said to that church gathering it does indicate that is what he really does believe. His actions and attitudes certainly appear to support that conclusion and a fair assumption.