Who knewz? Murdoch’s ambition to out-Google Google News lands in a steaming heap

Back in January 2020, News Corp CEO Robert Thomson announced the birth of a website called Knewz, with a big promise: that it would transform the news and be “free of filter bubbles and narrow-minded nonsense”.

“Knewz is unique in that readers can, at a single glance, see multiple sources. It is not egregious aggregation but generous aggregation. There are mastheads from across the political and regional spectrum, and premium publishers will not be relegated in the rankings,” he said.

“Knewz.com works by combining cutting edge, proprietary artificial intelligence with experienced editors. The technology constantly scans hundreds of real news sources, and editors curate a selection of headlines that provide a broad perspective on stories of the day.”

In short, Knewz was going to be the Murdochs’ answer to Google News. But seeing as this is the same family who turned the pre-Facebook idea of MySpace from a $500 million-plus purchase into a $35 million asset, building Knewz into a rival for Google was always going to be a difficult task — if not a vainglorious example of Murdochian arrogance.

In fact, Knewz never really had a chance. A month after its launch, News Corp settled its long running fight with Google. The settlement had been tipped two months earlier, before Christmas 2019. Google and Facebook had decided that paying a ransom to legacy media companies like News (and Nine and dozens of others here and offshore) was a smarter business tactic than going to the mattresses for a bare-knuckle brawl with the Murdoch clan. 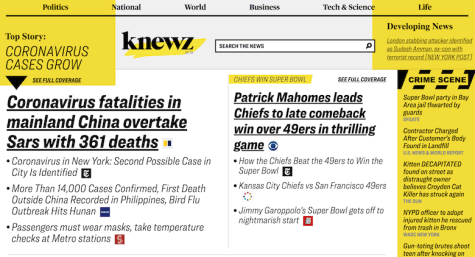 All the Knewz that’s fit to search: can we trust News Corp’s new platform?

Knewz laboured on in beta form for the next 20 months, a long time for such testing. When in action, it pulled headlines from News Corp’s own stable of publications in the US, UK and Australia, as well as from hundreds of third-party news outlets including CNBC, CNN, Bloomberg, The Washington Post, The New York Times, NBC News and the New York Post, as well Murdoch’s Fox News.

But last Friday, News Corp finally pulled the plug on Knewz. By the time of its demise, the fleet of big-name media links and headline sources (à la Google) had been reduced to a handful of News Corp businesses such as The Wall Street Journal and New York Post, the US edition of fading UK title The Sun, News’ financial news website MarketWatch and, oddly, News’ real estate listings website realtor.com plus Mansion Global, a luxury homes website.

“We started Knewz as an experiment in news aggregation because we wanted to gather a diverse range of quality journalism, to highlight all sides of every story and to protect and project provenance,” a message on the site read on Friday. “We certainly had provenance, but not profits, and so we bid Knewz farewell.”

The failure of Knewz has echoes of another Murdochian new tech failure — The Daily back in 2011/2012. That started a month late in February 2011 as the world’s first iPad style newspaper, and died in December 2012 with its URL directing those interested in media ghost sites to the New York Post.

Rupert Murdoch, at the time News Corp CEO and chairman (before the split in 2013), said in a statement that The Daily “could not find a large enough audience quickly enough to convince us the business model was sustainable in the long-term”. A very apt description of why Knewz failed, eight and a half years before it happened.

Private Media, the publisher of Crikey, receives licensing fees from Google and Facebook.

I think that the new “balanced” “free speech” social and media services (like this thing, and the recent Gettr thing) are discovering that not as many self-identify as alt-right troll as they thought. Well, I hope that’s what it shows.

No doubt the government will be on this like a shot and a generous ex gratia payment fromt he Australian tax payer will be winging its way to Rupert before you can say “No Knewz is good news”.

Crikey receives licensing fees from Google? Has this been declared anywhere on site as to what that exactly means?