Julia Banks is no sympathetic martyr of the Me Too cause, but her new book does well to highlight the Liberal Party's role in enabling and covering up abuse.

Former MP Julia Banks has dropped her long-promised bucket on the federal Liberal Party and the results, so far, have been much as you’d expect.

Three narratives dominate the media’s reporting on her new book, Power Play: support for or criticism of Banks herself, along political lines; the guessing game about the owner of the “wandering hand”; and the role played by the dark eminence of Scott Morrison in Banks’ story of betrayal.

Banks isn’t a sympathetic martyr of the Me Too cause. She speaks like the corporate lawyer she was; clear, direct, unemotional. The minute calculation of what she will and won’t choose to reveal has been thought through. This gives her target — the party — room for a pincer attack on her motivations and credibility.

One wing of the assault is the “why now, why no names, she’s just a sore loser” trope. The other is the reactionary’s go-to: “that’s not my experience”.

As John Howard happily discounted the 76% of Australians who think we’re a racist country with those words, so Greg Hunt and sundry other talking heads can use them to label Banks a liar without saying she lied.

As to which conscienceless senior cabinet minister sexually harassed Banks, does the predator’s identity matter? Yes, in the sense that gee it’d be nice if we had a ministry that didn’t include alleged sex offenders, but that’s as likely to happen as a federal anti-corruption body until we get a properly hung parliament putting the crossbench in power.

On Morrison, Banks has again been precise for effect, calling the prime minister “constant, menacing, background wallpaper, imperceptibly controlling his obliging intermediaries to do his work for him”.

Banks knows what she’s doing, and it isn’t just about maximising sales of her book (although it isn’t not that either). She is pointing to the least-observed and rarely addressed leg of the three-cornered stool that makes up institutional abuse: the organism of enablement and cover-up.

The other two parts are the perpetrator and the victim. We talk and legislate a lot for the predators, the (mostly) men who commit sexual violence on (mostly) women and children. We have learned to recognise that they can be most readily found in institutional settings, because that is where systemic power imbalances are grown, cultivated and preserved. Largely we talk about detection and punishment, because rotten apples are an easier construct than a diseased tree.

Lately we’ve also focused heavily on the victims, shamed into it by the royal commission into child abuse and the Me Too movement. We are encouraging them to speak, although we’re a long way from offering anything useful in return; so far, just celebrity and retraumatisation.

Perpetrators and victims are endlessly renewable resources, as long as institutions do what they do and have always done.

Morrison is amoral, I think that’s no longer controversial. As newly-minted prime minister when Banks decided to quit the party, he tried to monster, wheedle and manipulate her into conforming to his political needs. It was entirely in character.

However, he was prime minister when she walked, not when she was victimised. He wasn’t in charge of the ministry or the Liberal Party’s culture when Banks was being subjected to routine sexism, ageism, misogyny and harassment at the hands of the people she had thought were her ideological roommates but who turned out to be a bunch of neanderthal thugs.

When Banks was sexually harassed in plain sight by a senior cabinet minister, the party leader was Malcolm Turnbull. He, famously, instituted the bonk ban in an attempt to keep Barnaby Joyce in one paddock at a time. He also, less famously, made Christian Porter attorney-general when he’d already heard about the alleged incident involving Porter and a female staffer at Canberra’s Public Bar.

Banks points squarely at Morrison as chief enabler of misogyny and coordinator of the cover-up, for what had happened to her. That may be so, but to expect anything else of him would be bizarre given his track record of failure to stand up for anything except the alleged sex offenders in his own government.

Morrison is just the latest, and least ethical, custodian of the rotted-out institution that is more and more literally becoming the Liberal Party. The party that just preselected, to replace Andrew Laming, Henry Pike — a guy who is only discernibly an improvement on Laming in that his misogynistic behaviour is already on public record.

Whether this was obvious to Banks the minute she joined the party, perhaps she’ll explain. She should be respected for holding a light to the sordid reality she found, and she may encourage other women in that and other political parties to do the same. The predators she has declined to name will continue to operate in plain sight until replaced by others no better and potentially worse.

That will continue until the party decides that its corporate interests are meaningless if Banks’ experience continues to be the norm. No story better than hers illustrates the Liberal Party’s empty heart. 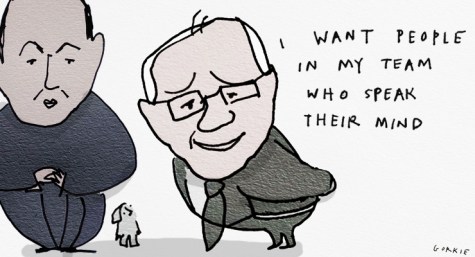 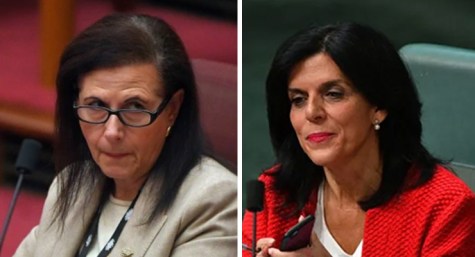 And the other side? Maybe Emma Husar should write a book as well?

Why does there have to be another side? Emma Husar’s memoirs may well tell a similar story about her experience of party politics. But that doesn’t detract from the seriousness of the culture portrayed by Julia Banks. If we have to await an exposé of another Party’s failings before the so called leaders of the Liberal Party do something about their own, we’ll be waiting a long time. As I see it, a similar story from, and about, Emma Husar’s experience would probably just delay any meaningful reform of male behaviour in Canberra. “See”, says Scott Morrison, “Labor does it, too, so why should we clean up our act when they haven’t cleaned up theirs.”

When Banks was sexually harassed in plain sight by a senior cabinet minister, the party leader was Malcolm Turnbull. He, famously, instituted the bonk ban in an attempt to keep Barnaby Joyce in one paddock at a time.  Nice analogy!

A “senior cabinet minister” from that era has since also admitted to a predilection for the “laying on of hands”.

Banks isn’t wearing a raincoat and gumboots in this bucketing either.
“Bullying”? Look at her record – in the government of Robodebt and ““I could live on 40 bucks a day knowing that the Government is supporting me with Newstart looking for employment”.

Michael, what do you figure are the pros and cons for Julia Banks of naming the cabinet minister?

If what she has described did happen, without any corroborating witnesses, would Banks necessarily have to come up with a lot of money for a defence if a defamation suit were launched? Or could she make a case for a truth defence without having to put money down?

“He wasn’t in charge of the ministry or the Liberal Party’s culture when Banks was being subjected to routine sexism, ageism, misogyny and harassment at the hands of the people she had thought were her ideological roommates but who turned out to be a bunch of neanderthal thugs.”
The same question arises about Brittany Higgins.
What does a woman in her 20s think she has in common with the thugs, bullies and idiots who run the Liberal Party? Why did she join? Why did she take the path of becoming an adviser?
Anyone who has been paying attention knows about the dysfunction of the Liberal and National parties.

For Brittany Higgins, it was probably naivety that such a malignant, sexist, entitled culture existed in Australia.
Ditto Julia Banks and Emma Husar.

There were nasty and sexist accusations flying around about Emma which after they were examined came to NADA.
My question then goes to the Labor Party, what happened to the male accuser?

The boys of the Liberal Party have been schooled in DARVO and so there is no point in printing the predator’s name anyway.

Look at the abuse of power that was exercised with Alan Tudge/ the Liberal Party reaching out to stamp on the career and the woman’s family’s prospects because she ended 3 year affair with him and spoke out about the public misbehaviour of Christian Porter which was observed by her.

Don’t forget the “monstering” of both the chair and the CEO of the ABC before the broadcast of “Inside the Canberra bubble”. a phrase that has instantaneously disappeared from the Prime Minimal’s lexicon.
Then there is Christian Porter’s very expensively dropped defamation action against the ABC.

See klewso’s comment and my reply to klewso below. The upper classes and their parliamentary representatives see boollying only when it’s directed at them. Systemic boollying that they benefit from and work so hard to maintain is invisible to them. But yes, play with a***holes and you’re likely to get shat on.

Hang on, not Michaelia Cash.