Can we trust the state premiers now they’re running the country?

The premiers are the most powerful leaders in the country, but how much can we rely on them to do the right thing by Australians?

There was something almost sad about the feeble announcement and spin from Scott Morrison after Friday’s national cabinet meeting.

Having briefed the government’s chief stenographer about how Friday’s meeting was to be portrayed, the prime minister’s “leadership” consisted of a plan for exiting from the pandemic composed of four “stages”, “components” or “phases”.

Unlike traditional uses of the word “plan”, this one had no detail, no timetable, no direction, no way of establishing in which “component” we would be located — in essence, a heading “plan” with four dot points, each of which read TBA.

It was, to be accurate, a plan for establishing a process by which a plan would be developed — nearly seven months after the vaccination rollout began.

It confirmed that the primary capacity within the Morrison government, with an army of a quarter of a million public servants — and, for that matter, an actual army — is to write media releases. 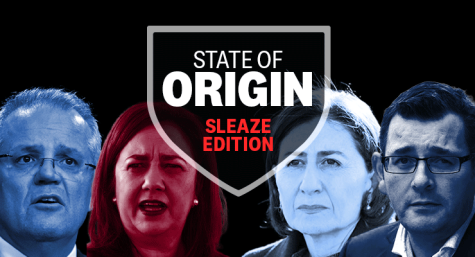 The actual concrete announcement was a halving of international arrivals, which the Queensland and Victorian governments had demanded before the meeting. Having ceded responsibility for quarantine to the states in what at the time must have seemed a clever move, Morrison is now stuck with the states making decisions about migration policy.

Power abhors a vacuum, and tends to rush in to fill it. Morrison’s incapacity to lead, a reflection of his own political tactics, his ideological view of the role of government, and his background in marketing, has created a vacuum that premiers have been only too happy to fill.

They are now the most powerful people in Australia. They can send millions of us into lockdown, dictate where we travel, lock us up for breaking public health rules, prevent us from returning to Australia, and slow down or speed up migration — in addition to their control of the services most people count as the most important provided by government: health and education.

They’ve also taken the lead on climate policy, another leadership vacuum created by Morrison, for the same reasons: he can’t and doesn’t want to lead.

These premiers also have the power of public support, the kind of raw power other politicians understand. That’s why Morrison went from supporting a challenge to Western Australia’s Premier Mark McGowan’s border lockdown to aping McGowan after the latter destroyed his political opposition in an election.

Progressives are delighted. The hated Morrison is being overridden by the likes of McGowan, Daniel Andrews and Annastacia Palaszczuk. It doesn’t occur to them that the boot can easily be on the other foot with a Labor government in Canberra struggling to assert its authority against recalcitrant Coalition premiers. Or that the centrifugal shift of power that has occurred won’t be easily or quickly reversed.

And how much do we trust state premiers with such power? How has Victoria benefited from Andrews’ close connections with Crown casinos, in which generous donations have coincided with funding cuts to the gambling regulator and an accommodating regime in which money-laundering, links with organised crime and problem gambling flourished?

Those consequences are — finally — on display every day at the royal commission Andrews belatedly called.

How much benefit have Victorians got from the Victorian Labor Party’s compulsive branch stacking and misuse of taxpayer funds? And how did a major quarantine disaster manage to unfold on Andrews’ watch last year without, apparently, anyone being responsible?

The response from Danistans will be “what about the Liberals?”, as if that magics away corruption, rorting and influence-peddling.

What about Palaszczuk, who spent much of last week hyping fears about the AstraZeneca vaccine and making completely false claims that the Morrison government was planning mass vaccination hubs for under-40s with AZ? Not to mention the close links between Labor-aligned lobbyists, their corporate clients and the Palaszczuk government.

Presumably progressives are also relaxed about the flow of power to the Berejiklian government in NSW as well, despite the shabby standards of conduct within that government — up to and including the premier.

Some small-government advocates might not be too fussed, either, with the prospect of a more federal federation becoming reality, in which Canberra, for nearly a century in the ascendancy over the states, pushed back towards a role more akin to Edwardian times.

These changes — good or bad, depending on your point of view — haven’t been occasioned by some formal process, or by agreement, or by constitutional change, but by the political tactics and failings of one prime minister in response to a major crisis.

Perhaps they were inevitable, like many other changes occasioned by the pandemic. But who’s thinking about the consequences of a different form of federation than the one with which we entered 2020? 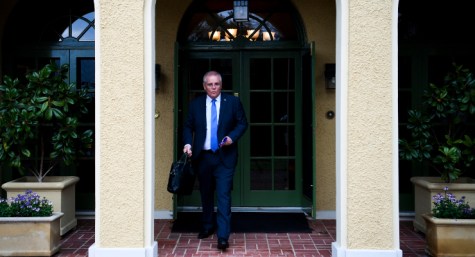 An outbreak of peace? National cabinet offers a pathway to appease premiers 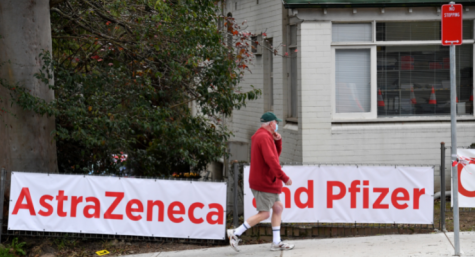 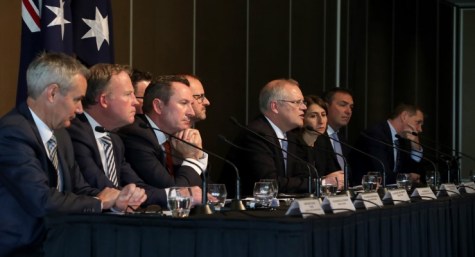 “These changes — good or bad, depending on your point of view — haven’t been occasioned by some formal process, or by agreement, or by constitutional change…”

These ‘changes’ took place without a formal process or constitutional change because they are not changes and they are constitutional. All we have seen is the federal government not governing and the states picking the slack – let us be thankful. Without the states we would now be well and truly stuffed.

The rest of Keane’s complaint concerns a different issue. He’s right that the state governments are far from perfect. They are rife with corrupt practices, manipulated by vested interests, often lacking competence and their honesty is frequently questionable. The federal government is far worse, but that’s no comfort.

What is needed at both state and federal level is an end to impunity. Some state governments are subject to some independent scrutiny and the federal government is effectively free of any oversight at all. The basic requirements are a robust well-resourced independent crime and commission and audit office in all jurisdictions and all governments subject to effective parliamentary oversight as well as judicial review. An effective bill of rights would be icing on the cake. Not asking much, is it?

Do you really think a government of any stripe would propose a bill of rights that takes power from politicians? They’d not even want to put it to a referendum.

You are right. When I wrote “Not asking much” the phrase was meant to be heavily larded with sarcasm. Hell will freeze over long before any of these things happen; our politicians have very few principles they would die in a ditch defending, but one near the top of the list is keeping themselves free from any oversight, restrictions or consequences no matter what they do.

They did it in Canada.

We are, in actual fact, well and truly stuffed.

The states have seen to it. And our national government has allowed it to happen.

One who is totally untrustworthy and a danger to the nation is Berjiklian, Rick Morton has an article in TSP

before Sydney’s outbreak of the Delta variant, NSW Health approached Qantas and offered to provide vaccinations for all its staff. This offer was made not just for those flying internationally or directly connected to border and quarantine operations, but accountants, commercial teams, loyalty program managers and communications staff. Every back-office employee could be vaccinated, even if aged under 40 – a cohort not yet eligible under national guidelines.
The shots were administered at the state’s hub at the Royal Prince Alfred Hospital, the same hub where 150 boarders from the prestigious independent school St Joseph’s College were vaccinated with Pfizer shots despite only a handful of its students being eligible because they were Indigenous.
The offer made to Qantas was not made to Virgin Australia or Regional Express. No reason was given. Decisions were being made on the fly.
The Saturday Paper sent follow-up questions to NSW Health about this apparent discrepancy and was met with a curt response: “We have nothing further to add to the statement provided.”

On January 6, 2021 Hunt announced that the start of the program was being brought forward and the next day the Coalition released its now infamous vaccine strategy with ostensibly five phases. The highest priority groups in Phase 1A – quarantine and border workers, front-line health workers, aged- and disability-care residents and staff – would be inoculated first.
This would take about six weeks.
History records it never happened.
Morrison… received his first dose of Pfizer’s mRNA vaccine on February 21
…officials realised targets would not be met.
First, they sidelined disability residents and care workers who were initially treated with equal urgency under the phases. When it emerged so few aged-care residents were getting even a first vaccine dose, the government quietly abandoned aged-care workers.
In the middle of April, the Coalition appointed the Royal Australian Navy’s Commodore Eric Young to manage the vaccine rollout.
In early June, Morrison appointed another military leader, Lieutenant-General John Frewen, as the uniformed head of the vaccination program, apparently freezing out Eric Young while renaming the taskforce Operation Covid Shield.
The prime minister’s office also began briefing against former chief medical officer Brendan Murphy, the government’s hand-picked new secretary of the Department of Health, as he floundered before senate committees. …Ric Morton TSP

The one thing the Morrison government has achieved: the rekindling of interstate animosity from its last home in sport to now permeating everything.
A divided nation is easier to bamboozle.
The cancer that are casinos was always going to corrupt.
Jeff Kennett approved the casino in 1994.

24/2/2021 · Former Victorian Premier Jeff Kennett has slammed a move to set up a royal commission into Crown Casino and not the state’s failed hotel quarantine scheme, saying the democratic processes in Victoria have “never been lower”.

Otherwise insight article tarnished by a disproportionate and unwarranted focus on one premier. Bernard really really doesn’t like Dan. We get it.

Keep in mind though that the States and Territories have all been “governing” under emergency powers for the best part of the last 18 months.

Notwithstanding that all State and Territory Parliaments have returned to virtually normal sitting arrangements, democracy remains fundamentally set aside. Police and health authorities, with Premiers and Ministers, have absolute power over our day-to-day lives.

So when Bernard asks, “how much do we trust state premiers with such power”, the answer seems to be “absolutely”. Perhaps blindly though.

The comment that the public service role is to write press releases for Ministers has been an open secret for quite a while.