With Scotty from marketing at the helm, have we got an awesome ad campaign urging us to get vaccinated? Of course we haven't. But overseas, there are some great options!

There’s no other way to put it: Australia’s COVID-19 vaccination rollout is a red hot mess. But with Scotty from marketing at the helm, a man better known for announcements and spin than actually getting things done, the one thing that should be going well is the marketing campaign.

So where the bloody hell is it? Earlier this week, officials behind the rollout admitted that the government hasn’t started the “rallying” stage of the campaign because it remains worried about supply.

“We want to make sure we don’t start the campaign until we are comfortable we can meet the demand we hope will be engendered by the campaign,” said the government’s vaccine commander, Lieutenant General John Frewen.

Translation: they don’t want to ask people to get vaccinated in case people actually listen and want to get vaccinated. This explains the current vaccine advertisement, “We’re not safe until we’re all safe”, ft. infectious disease physician Dr Nick Coatsworth and the driest coffee-slash-jab joke ever (“yours is the two-shot”). No chance of “rallying” the troops with that one.

But fear not, a campaign is coming. The government has appointed creative agency BMF to create a major campaign to be launched in July to encourage Australians under 40 to get the jab. It will run across social media, traditional media and inside shopping centres (assuming shopping centres will be open at this time).

According to The Sydney Morning Herald, we can expect celebrities, jokes, and songs that will “emotionally entice” those under 40 to get the vaccine.

I for one cannot wait to be emotionally enticed by the federal government. But until then, let’s take a look at vaccination campaigns from around the world to get an idea of what might be in store for us.

They’ve got Jacinda and they’ve got the ad campaign of the year. The New Zealand jab ad, “Ka kite, COVID”, starts off with perhaps the best line ever: “Hey COVID, you were a bit of an egg in 2020, eh?”

The ad frames the vaccine as the “metaphorical door to freedom” for all kinds of activities — heading off to see your mum, setting the date for your big fab wedding, and going back to school. It’s heartwarming, it’s diverse, and it’s just really fun.

The French campaign similarly appeals to the freedoms that people can enjoy once they’ve been vaccinated – albeit more French freedoms.

As the needle goes in, shop doors open up, restaurants start cooking up a feast, the theatre curtain draws open and fans go back to the football. Vive la France.

It manages to inspire people to act fast, counters vaccine hesitancy, and praises the work of the Singaporean government with a colourful rap duo: “It’s safe for most including elderly, because the government got check properly.”

Over in the UK they had a similar message with less fanfare and more knights. The understated British ad is a behind-the-scenes style audition featuring sirs Elton John and Michael Caine — and the joke’s on Elton, who doesn’t get the part, even after saying: “Well, at this short notice you won’t find anyone bigger.” Cue Caine sounding like everyone’s grandpa and absolutely acing it.

The ad is simple and allays everyone’s very biggest fear when Caine says, “I just had the COVID-19 vaccine and it didn’t hurt”. Simple, to the point.

If Barack Obama turns up to appear in your ad campaign, you’ve already won hearts and minds haven’t you? And if you can make it a dig at the “Dark Years of the US and Trump”, even better.

The US campaign is so nostalgic it hurts. After Obama’s first face-to-camera, it actually says, “we all want to go back to the things we love and miss”. Yes, we do, Barack.

Also in the ad is George W Bush and former first lady Laura. Obama makes mention of Michelle (and Michelle’s mum), but Bill Clinton appears alone with only a half-second frame of Hillary because, of course, if Hillary was there too much they’d lose the unlosable (COVID-19 ad) campaign.

If these COVID-19 vaccination campaigns are anything to go by, here’s what we’re predicting for Australia: Alf Stewart and John Howard holding a framed picture of Sir Prince Philip Duke of Edinburgh at Stadium Australia, watching the Wallabies win the Bledisloe Cup. 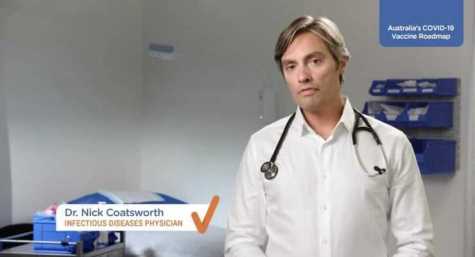 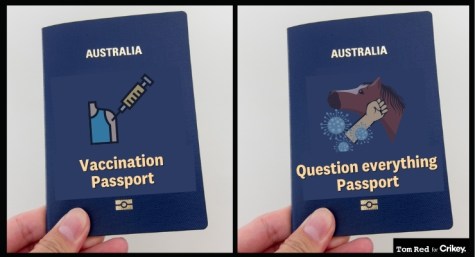 Got to love the Kiwi ad… definitely the best, followed closely by Singapore’s version.
Heaven help us all if Coatsworth and Morrison appear in future ads together…that would really end the vaccination rollout.

I wonder why Trump didn’t get a part in the U.S campaign ad?

Crikey could organise an ad competition. In the Gruen style. I suspect there is serious capability in the Crikey readership. If nothing else it would create a few clicks, show up the New Zealanders and relieve the pain of the cringe when the inevitable, official ‘Where the bloody hell are you’ celebrity ads appear.

“Scotty from Marketing” is way ahead of you. Unlike those cheese-eating surrender monkeys, he has a world-class un-campaign to leave lots of people un-vaccinated.

Once it became too obvious he shouldn’t have put all his eggs in the A-Z basket, he and Hunt cast doubt on the quality of A-Z, so as to gas-light us that it was A-Z’s fault instead. Hence the continual knee-jerk changes to the A-Z age limits, and now the incomprehensible decision to phase it out altogether. Hoping that the Pfizer cavalry arrives just-in-time.