As the West fails to place China's rise alongside a field of broken tiger economies, it also fails to understand the country's vital contract: stay out of politics and prosper in the belly of the leviathan.

Three days ago The Age had a most interesting opinion piece on China. No, no, come back, it’s not Uhlmann! I wouldn’t expose you to the thoughts of the lizard king on a Friday.

No, this was Peter Hartcher, busy transitioning from the man cabinet ministers leak to from within cabinet, to sage elder statesman of Australia’s position in the world.

Well, it’s better than Uhlmann. Hartcher is markedly less hysterical. If anything, he’s a little old-school Age in looking at the rise of China and the alleged contradictions it now faces.

Hartcher’s article is worth examining in detail for it usefully expresses the liberal viewpoint, and its confusions, not only about the Middle Kingdom but also about actually existing democracy in the West.

China’s rise has been magnificent, Hartcher notes: from a substantially peasant society when Mao died in 1976 to a country launching its own space station today. But at the same time as it releases mass human potential by the alleviation of poverty, it suppresses it through the repression of democracy and open society, in the process “infantilising” the entire Chinese population. China has repeated the earlier successes of the “Asian tigers”.

No one has ever achieved anything like China, Hartcher notes, and no one thought it could be done. Yet it has not simultaneously liberated its people, as the tigers did.

Well, like getting someone else’s suitcase off the carousel, there’s a lot to unpack there, and most of it is wrong.

If you consider the other tigers in isolation — Japan, South Korea, Singapore, Taiwan — it looks amazing. But Singapore was a city state that made itself a centre for capital, and the other three were rebuilt with US money before their own state-steered/cartelised processes took off.

What China did was quite different. Having been constrained within Mao’s “communism of poverty” through the cultural revolution — in which a society organised into communes would march towards communism without any process of individual embourgeoisement — Deng Xiaoping’s takeover in 1978 introduced something new to post-1949 China, namely Marxism.

Mao may have used Marxism as a guide to revolution, but there was nothing much Marxist about his subsequent governance. Marxism argued that only capitalism provided the structures which made socialism possible. Post-Maoist China wasn’t a steered capitalist combine — it was a command society with a few special economic zones in which the private economy was allowed to let rip. Within the structure of five-year plans, these were allowed to expand, building the economy until China could enter the WTO on its own terms in 2001.

The initial engineering of a city-country split in incomes and opportunities was later compensated somewhat, as medical and education services and eventually universal social security payments were extended nationwide.

One’s strong suspicion would be that this “herculean” task could only be achieved within a directed political framework, and that far from being regarded as impossible it had been explicitly considered by early 20th-century “second international” Marxists and later.

Hartcher may not have read Kautsky, but you can be sure that Deng had.

Such “transition” Marxists argued that a directed capitalist economy would have the maximum of capitalist initiative, while avoiding what Marx called “the anarchy of production” — the market’s circular logic which ensures that while China has an interurban maglev train system, and a hundred new cities, the US invested in credit default swaps and diabetes in eight different flavours.

Hartcher’s simplistic notion that multi-party democracy always leads to human flourishing is simply unwarranted. The main argument for an open society is that it limits the possibility of lethal tyranny. There is no guarantee of flourishing, since it can equally become a political market in which interests undermine the pursuit of clear social goods.

One could say that the Asian tigers were pretty laggard in pursuing actual democracy (and in Japan, the 50-year rule of the Liberal Democratic Party was managed by bribing the Socialist Party to be a permanent opposition), but they did.

It’s clear that China, by contrast, is re-Stalinising, curbing the market’s atomising effects by linking a new nationalism to a cult of personality fairly pallid compared to Stalin’s and Mao’s — although what isn’t. In 1967 the Chinese Communist Party issued conversation booklets showing how to begin each sentence in an exchange with praise of the Great Helmsman — in a manner that Hartcher, quoting Isaiah Berlin calls, the “artificial dialectic”. (He’s being naughty here; Berlin’s article containing that phrase was re-aired in the China Heritage journal a fortnight ago. Coincidence? Or does The Age not care about acknowledging sources?)

He’s also got it wrong. Berlin argued that Stalin’s post-war strategy of renewed capricious terror was a way of giving history a kick-along, by creating waves of liberalisation followed by a rounding up of all those who’d believed it.

Leaving aside whether that’s a dialectic or not, it is not what the CCP is doing (except in Hong Kong, a special case). Instead it’s the opposite — a gradual shrinking of such open society as existed, in a way that allows people to recalibrate their behaviour. It’s an offer of the Hobbesian contract — stay out of politics and prosper in the belly of the leviathan.

It is not a repeat of Stalinism, that hyper-violent and sometimes chaotic late chapter in the history of religion. It’s the refashioning of the Stalinist system, with patches and layers of limited openness, some forms of local democracy, in a way that would allow for its longevity and assure a form of consent to it.

Hartcher and other liberals can’t imagine anything but a choice between China’s totalitarian-authoritarian system and our broken democracies. The danger is not a chaotic China, plunging from semi-openness to semi-closedness; it’s a country that so perfects consensual managed control that we approach it from the other side, as a model, explicitly acknowledged or not, as the answer to our political anarchy of production.

Galbraith’s convergence, achieved at last. Nothing ordains the victory of pluralism and openness. But nor does anything guarantee that its only other is North Korea.

It’s the liberal fantasy endlessly replayed, the impasse in their ability to think about a changing world. Hartcher’s piece is that attitude’s most effective distillation.

We now return you to our usual service, where Uhlmann exposes Xi’s plan to have the Melbourne School of Continental Philosophy poison the wind turbines. 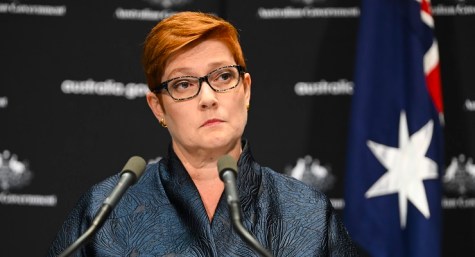 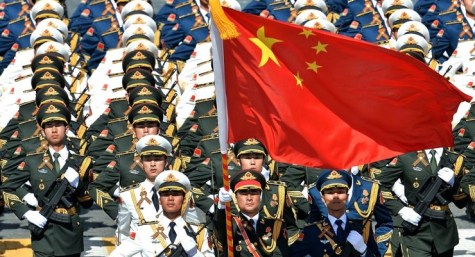 Guy wouldn’t last a day in China without ending up on the Wall.

Did you mean against the Wall?

Peter Varghese has an interesting analysis on John Menadue’s blog this morning.

I quite enjoyed that take Guy. Plus the last para was a peach. 🙂

I stopped buying the Age because of Hartcher. I think Guy Rundle has captured what Hartcher is, namely a brainless bogan masquerading as a spokesman for ‘Democracy’.

I have written to The Drum asking why they have scribes like Hartcher and Sheridan on the show when they could get some serious expertise like former diplomats, eg Varghese, McCarthy, etc, to provide informed opinion. Of course I received no reply. But then I reminded myself that the purpose of the Drum is not to inform. If it were, Ellen Fanning would stop interrupting the guest technocrats, and they wouldn’t invite former politicians as guests.

Have to agree Dieter. Hartcher’s role as Rudd’s megaphone during the Gillard years was particularly egregious, in my opinion.

Saddam Hussain’s Iraq had the same contract, I believe: stay out of politics and you’ll do well. I take the point, of course, that US-style “democracy” is not the only alternative, and it is easy to reject Harcher’s claim of the population of China being “infantilised,” but what is the effect of this “social contract”? What is the path to socialist planning which has genuine broad participation?? After all, where is the flood of refugees and economic migrants seeking refuge in China, apart from North Korean refugees?

Saddam didn’t have a vast industrial complex, an economy to rival the US, a bigger navy, and nukes. Economic migrants? Yes, there actually are many from outside the mainland but remember China has huge internal economic migration. Hong Kong aside, about 400,000 Taiwanese live and work on the mainland for starters. But in a huge population a few hundred thousand here and there looks like nothing.

China is not a country that has widespread inwards immigration. Neither does India for that matter. The hint is the size of their respective populations and cultural views that you work and support yourself.

In both cases jobs are, typically, by invitation only; indeed for Asia and the Middle East generally.

There are more Muslims in India than Pakistan yet, strangely, none ever emigrate there.

Reading the word ‘infantilised’, I immediately thought of the average Australian voter, and particularly those who vote for the National Party. You don’t have to leave Australia to find the infantilised.