As regional areas lose more and more of their local news, Sky has gained an increasingly receptive audience.

When Stuart heard his elderly parents loudly criticising Victorian health officials for refusing to use hydroxychloroquine as a COVID-19 treatment, he knew exactly where the idea had came from: the opinion hosts of Sky News Australia.

The disproved treatment has been a popular topic of discussion by COVID health restrictions sceptics and anti-vaxxers alike, flourishing on social media where people share individual scientific papers to make the case for using the drug instead of the vaccine.

Stuart’s parents, who live in regional Victoria, aren’t big users of social media. But they do watch Sky News, which has repeatedly covered the use of the drug. There have been at least 16 segments hosted by Andrew Bolt, Alan Jones and Rowan Dean about the drug uploaded to the Sky News Australia website in the past year, according to social media analytics tool BuzzSumo.com.

In a short time, Sky News Australia has turned itself from a cable television station with a small audience (most popular in politicians’ offices and Qantas lounges) to a digital juggernaut with one of the biggest reaches of social media of any Australian television station.

The key to this turnaround was a strategy that leans heavily on opinion “After Dark” personalities who regurgitate right-wing international culture war topics and flirt with conspiracy, much like Fox News in the US. 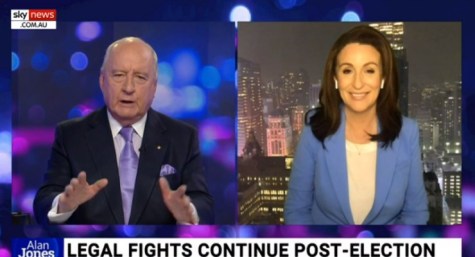 Since mid-2019, it has increased its YouTube subscribers numbers from near zero to 1.75 million (by far the most of any YouTube account for any single Australian news network) and doubled its Facebook followers to 1.1 million.

But another avenue of viewership in the past few years is its expansion to free-to-air television in regional areas. First launched in 2018, Sky has just struck a deal with regional broadcasters WIN and Southern Cross Austereo to go out in markets with more than 7 million potential viewers.

Several people have told Crikey about the impact of adding Sky News into the information diets of people in their lives. We have withheld their full names at their request — and to allow them to speak freely about their friends and family.

Stuart noticed that his parents spend their evenings watching Peta Credlin and Andrew Bolt. Although they’ve always been conservative, he’s seen them swing much further to the right since the network became available. They’ve also begun talking about topics that seem to be brought up only by the show’s hosts.

“They also rant about [the unproven COVID treatment] ivermectin when that was in vogue on Sky News, so you can see how misinformation like that can gain a foothold in regional communities,” he said.

Ken has also seen how the role Sky has played as his oldest friend has become increasingly conspiratorial. His friend has always been left-leaning but broadly distrusting of major parties and mainstream media. Ken says she watches television mostly, as the internet at her farm in Goulburn limits what she can do online. Last year she began using Sky News as her major source of information as she became more and more sceptical of public health measures.

“Some of the stuff she would send me would come from Sky News,” Ken said. “She also sends links to videos like [a wildly popular anti-vaccine documentary] Plandemic.”

Ken doesn’t blame Sky entirely for his friend’s views — he says she had been getting fringe content from a variety of sources — but the channel’s embrace of content that dogwhistles conspiracy theories had reinforced her evolving beliefs.

He gave the example of the “Great Reset” — a meeting of the World Economic Forum that has come to represent a “hodgepodge of one-world government fears that has gained steam in the wake of Biden’s win” that’s frequently mentioned by Dean and former Liberal senator Cory Bernardi — as a theory that his friend cites.

“I think they keep stuff like the ‘Great Reset’ in the atmosphere longer,” Ken said.

Rusty, an online nom de plume, says he sees how farmers like his sister-in-law are exposed to climate denialism aired on Sky News Australia and in News Corp publications.

He recalls when one farmer cited Bolt to argue that climate change is a hoax.

“I just said that Bolt was in the entertainment business and he’ll get paid no matter what the weather ends up doing, whereas farmers and rural people are on the front line of dealing with climate,” he said.

While Sky News Australia’s terrestrial television numbers are dwarfed by both their competitors and their own digital reach, their regional free-to-air audience numbers have been consistently growing.

Against the backdrop of a regional Australia that has less and less local media, it’s gaining a foothold as an increasingly popular source of hyper-partisan information and misinformation for those who live in country Australia.

The old country party mentality will live on, self romancing, self deceiving, self destructive, but, all of us with it perhaps. Ignorance is a liking god, the unfounded and scurrilous opinion a monument to utter stupidity. The Quid makers love it all.

But the party will not with declining regional demographics; for now they are riding ageing, declining and conservative electorates.

Jaybuoy
Reply to  Terry of Tuggeranong

a royal commission is required into this governments largesse to entities tied to Murdoch..

Both Trump and National Party voters are of the same limited intellectual mindset.

How does this story mesh with the news from March that WIN was dropping sky from all of their network?

While and where WIN are dropping it, SCA are taking it up.