From the first day of Scott Morrison's prime ministership, Tim Stewart was 'rebuilding a new identity' — and following his mate's words closely.

For more on the relationship between Scott Morrison and QAnon proponent Tim Stewart, go here.

Scott Morrison is appointed prime minister. Tim Stewart marks the occasion by launching a Twitter account in the name of Burn Notice, a fictional spy hero, giving his address as Miami, USA.

Far from a daring espionage figure, Stewart is a 50-year-old suburban Sydney man who had been bankrupt after a failed business venture. He is also on his way to becoming a major Twitter influencer among Australia’s QAnon followers, as well as building a reputation as a sage on the coming “Awakening” — a moment which accompanies “the Storm”, which will see the end of a cabal of Satan-worshipping paedophiles which, according to QAnon, has been running the world.

Within months of becoming PM, Morrison is handed the job of delivering a national apology to those who had been sexually abused in church- and state-run institutions. In federal Parliament Morrison uses the term “ritual” abuse. This is seen by Stewart as embracing the QAnon preoccupation with satanic paedophilia and he hails it as evidence of Morrison commencing “phase 1 of our restoration”. In the hours before Morrison speaks, Stewart sends a text to a colleague foretelling it would happen: “I think Scott is going to do it!!“

Morrison’s office tells Inq that the term “ritual” was suggested by an advisory committee of experts set up to advise on the form of the national apology. Inq subsequently establishes that the term was not discussed by the committee. Nor did it appear in any of the reports of the royal commission.

It is one of 50 mentions of Morrison and Stewart’s alleged influence in text exchanges collected by Priest, a jeweller and online political agitator.

Morrison announces the federal government will legislate for the mandatory sentencing of convicted sex offenders, covering federal offences such as internet grooming or downloading child pornography (most paedophilia offences are covered by state laws).

Stewart endorses the announcement with his own tweet saying: “Light is finally being shone on this issue.”

Twitter suspends Stewart a second time under its “ban evasion policy’’ which applies to those who attempt to get around previous bans.

Parliamentary hearings also raise questions about security clearances for Tim Stewart’s wife, Lynelle, who has been employed by the Department of Prime Minister and Cabinet to assist Morrison’s wife, Jenny.

Tim Stewart tweets in support of the storming of the US Capitol — and then claims the far-left Antifa movement was responsible. 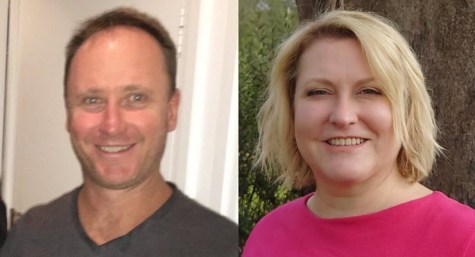 Karen Stewart: a shattered witness to her family’s unfolding nightmare 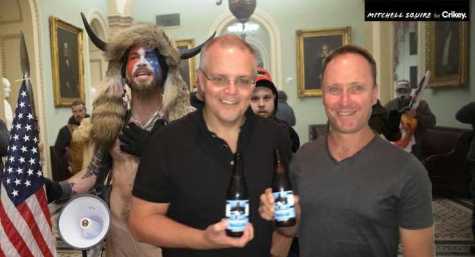 Morrison avoids actually naming QANON for fear of isolating his most loyal voters.

Morrison is just one big worrisome narcissistic closed-minded zealot who has surrounded himself with a clutch of the same. Employing his wife’s bestie – nothing to see here. “ what if it were our daughters?” Apparently the only worrisome kind of assault is sexual. It’s ok to lock little girls up in detention and torment their parents because that’s not a sexual assault ( the one QANon is fixated on) only an assault on their basic human rights.

When a real sexual assault did occur within his government and its offices, he still didn’t rush to respond in the way his Qanon mates pretend it should happen. In fact, needed to go home and ask his wife what it all meant.

Clearly, the 4 Corners program was suspended until late into crazmo’s appearance at the G7 talkfest.

To avoid offending the paedophiles Qanon reckons are running all governments ?

I watched the 4Corners broadcast last night and also viewed the tape of our local loonies being interviewed by their United States mentors.
I am astounded at the sheer stupidity of some of the comments and assertions made by these fools. Particularly, I am confused by their pretence to be driven by religion. Are they unaware that over the past several years, the vast majority of satanic paedophiles have been discovered not in the depths of government but in parish clergy and the evil senior clerics who have concealed them – and recent reports from the United States suggest that paedophilia and other forms of sexual deviance are as common in the happy clapping evangelistic and prosperity religions to which these guys seem to belong.
They are just a bunch of disgruntled clowns reflecting the hypocrisy that afflicts all religions.

…and that’s on their good days, AWA.

The irony being that the satanic paedophiles have been the very pastors who run the businesses that are tax free cults and sects; given the name religions.

So why is the Guardian’s silence on last night’s 4 Corners so deafening? Chomsky was right the so called “liberal western media” are not credible sources of information. Congrats Crikey and The New Daily – there is always a market for credible and quality journalism.

Not just Guardian, but pretty much the entire MSM, carefully buried the story. Yet it landed worrying hits on Morrison’s disturbing lack of judgment and empathy. He’s the same bigot who devoted his honours thesis to Christian Brethren.

Notably, Dear Leader’s aggressive statement back to the program blamed the ABC. Similar, he gaslights anyone who complains about his cynical and slapdash (hotel) quarantine and (A-Z) vaccination programs.

Litigation laws behind the silence. A litigious lot, the LNP. A fortune to be made from mining the comments of us unhappy punters.