As pressure mounts to allow a long-detained family to return home to Biloela, the government searches for the most politically advantageous solution to a moral issue.

After more than 1000 days in immigration detention, and nearly two years on Christmas Island, a Tamil asylum seeker family could be allowed to return home to Biloela this week.

Releasing the family would be an embarrassing backdown from the Morrison government, which has remained adamant about keeping them in detention and pursuing their deportation to Sri Lanka.

But the government is facing a backbench revolt, and widespread support for the family in the community. The only thing holding them back is the political challenge of managing the optics, making an end to the family’s incarceration look like a dose of compassion.

Why the ground shifted

After years of doubling down and defending the family’s treatment, at least six Coalition MPs have now publicly called for the family to be resettled in Australia. What’s changed? In part, it’s because the hospitalisation of four-year-old Tharnicaa Murugappan, flown to Perth sick with sepsis, has put the theatrical cruelty of the family’s indefinite detention firmly in the public eye.

But in part, it’s because the political calculus has shifted to favour of compassion.

Peter Dutton, who previously called the children “anchor babies”, is gone from Home Affairs. While his successor, Karen Andrews, defended the family’s detention, she’s no Dutton. Then came Tharnicaa’s hospitalisation, during a relatively quiet news week, at a time when we’re slouching towards an election.

The last week has been a classic semi-stage-managed government tone shift. First, Coalition MPs were anonymously voicing their reservations. Today there are at least six — Trent Zimmerman, Katie Allen, Jason Falinski, Bridget Archer, Ken O’Dowd (whose electorate includes Biloela), and now Barnaby Joyce — who have called for the government to let the family stay in Australia.

Also last week, Attorney-General Michaelia Cash warned about the “consequences of blinking”, in releasing the family. The tension between Cash’s comments and the MPs speaking in the family’s favour is a sign of a tightrope the Coalition is trying to walk, between staying tough on borders while responding to community outrage at the human cost of that unsentimental approach to refugees.

How does the government find a way?

It’s no longer politically tenable for the government to leave the family detained on Christmas Island. The only thing holding them back from sending the family back to Biloela tomorrow isn’t concern about restarting the people smuggling trade, but fear about handling the political optics of such a backdown.

The government is arguably set up for that perfectly now. The decision to release the family rests entirely with Immigration Minister Alex Hawke, who is currently reviewing a brief and will come to a decision within days over whether to use his discretion to release the family. Today, acting Prime Minister Michael McCormack confirmed Hawke would make an announcement on the family’s future this week.

Hawke probably gives the government their best option for a politically palatable resolution to an unpalatable situation. Morrison is out of the country. Despite the shift in public option, we’re still far enough from an election for any backlash to blow over.

Hawke’s decision can be isolated from the entire government. And because, as the decision-maker, anything he says could be mobilised against him in a review of that decision, he has an incentive to stay quiet on the case ahead.

He also has an incredibly broad range of options. He could, under his powers in s195A of the Migration Act, grant the whole family any visa under broad public interest grounds. He could lift the bar, and allow the whole family to reapply for visas. He could grant a bridging visa while Tharnicaa’s own protection application is being assessed. Or he could do nothing.

It’s that broadness which might be the government’s best tool in trying to turn a stunning backlash, and an admission of moral failure, into a political victory. 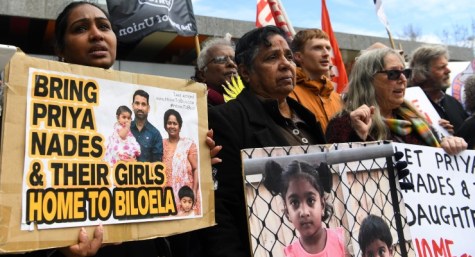 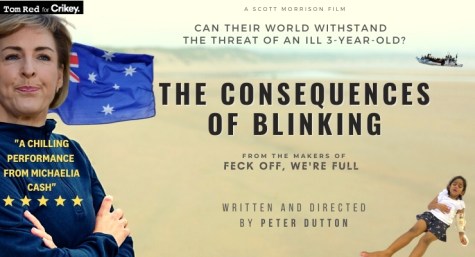 I find it hard to understand how a so called Christian Government, lead by a Prime Minister who proudly speaks of his Christian Views, can press the persecution of two small children and their parents. The only justification is that it will stop people Smugglers. No factual truth has been provided to back up this statement. In fact the Federal Governments over the last decade, have made exceptions to their laws, when ever it suits. For example, Au Pair girls have been allowed into the country.
The Federal Government chooses immigrants, with the knowledge that elderly parents will follow these allowed migrants. I have no problem with this as our growth depends upon these migrants and their families. I object to the blatant double standards applied by the Federal Government, purely to safe face and protect backsides.
I wonder if members of the Coalition Government actually have Children and/or Grandchildren of their own ?
Shame on the federal Government and members of the Liberal and National parties who support this crime against humanity.
,

A cynic would say that those who “find it hard to understand how a so called Christian Government, lead by a Prime Minister who proudly speaks of his Christian Views, can press the persecution of two small children and their parents” have a lot to learn about organised religion. Put bluntly, the success of Rightist class propaganda plus the civilised tone of the thoroughly controlled branch meetings (sorry, church services) deludes us that religious ritual reflects commitment, when it in fact reflects control.

That is completely Christian through and through. Look at the evangelicals that support Trump and his Mexican border policies to split families up, the instituted child abuse and cover up, the practice of shunning, etc etc. Seems pretty on form to me. In fact, I think the Christian moral authority is a complete lie, so don’t expect much.

Thank you, Kishor for giving us a very clear picture of what is available to Alex Hawke. I have been following this harrowing story since the family was “invaded” and removed from their home in 2018. I couldn’t believe then what was happening here in Australia. The Biloela community has given me strength to keep trying to bring this family “home to Biloela”. I only hope we can all succeed and then leave them in peace to recover. It will take a long time for this.

May ministerial discretion be used in this case so the public’s attention can turn to the much thornier problem of crafting a humane but limited refugee policy.

“Optics” don’t matter. Murdoch and the Murdoch oriented media will take care of that – erasing/rewriting/laundering/mitigating (replete with ‘Labor examples’) the history as they carry on their merry way.
‘Til the next self-made crisis of incompetence.
It doesn’t matter how many cock-ups – they will not countenance anyone else in government :- “No one is accountable when it’s the Limited News Party F**king Up.”
And when it is caught out – when there’s no other way – there’s always the “sacrificial scam”, an individual burned for public consumption. It’s never ‘systemic (as with Labor)’ : no matter how many times it happens.

I am cynical enough to believe that the only reason LNP MPs are (belatedly) acting on this scandal is that they have read the entrails and are concerned they will lose their seats. The honorable exception to this is Biloela’s own MP, Ken O’Dowd, who has long understood the community he represents.

The tragedy of the Biloela family is only one aspect of the poor governance currently afflicting Australia. This government’s policies on Climate Change, Energy, Education (especially Universities), Health and Aged Care are either shambolic or deliberately destructive.

However a solution is at hand. In this parliament the most effective MPs have been the independents and Adam Bandt as the solitary Green. The most successful Australian Parliament in recent years was the hung parliament from 2010-2013. It’s more than time for every responsible voter in LNP or marginal electorates to either create or work for a “Voices of” style independent MP. The destruction of decency in Australian politics took some years. It will take a great effort reverse the rot. But it needs to be done. Now.

I think you are being very kind to Adam Bandt.
Although at opposite ends of the Political spectrum, the Greens have some of the most wacky policy positions, right alongside Pauline Hanson.

Those “…wacky policy positions…” of which you blather, care to expand?

The most successful Australian Parliament in recent years was the hung parliament from 2010-2013.

True. But I think you have overlooked the critically important factor of Julia Gillard being able to negotiate with the two independents when Tony Abbott was clearly unable to do so. Without a leader willing and able to negotiate there is nothing to indicate any improvement from the present situation – a constant and ever-extending list of announceables and re-announceables and no bloody action at all.

Labor isn’t going to win Higgins, North Sydney or Warringah, but a good independent may, As the Liberal Party is increasingly controlled by its extreme right, those who would never consider voting Labor or Greens, need to find an alternative. The value of independents in these electorates is twofold. They bring commonsense to parliament and In a hung parliament they ensure the government acts properly. But they also help push the major parties towards the centre, which is where the majority of Australians reside.

Remember come next election do not vote LNP.

In fact…put them LAST in every electorate!

Yes. I used to say “put the sitting member last!”, but some time, around Abbott’s meteoric rise, I transitioned to “put the Liberal last!” I’ve never voted Liberal in my life, and I’m certainly not starting now…