Despite inching towards war in the not too distant past, these two Asian giants are becoming tighter — while Washington seems disengaged and uncommitted.

In late 2019 and early 2020, China and Indonesia were inching towards armed conflict. China’s coastguard and fishing militia were making continued incursions into Indonesia’s exclusive economic zone in the Natuna Sea, a region of the Pacific Ocean located between Borneo and Sumatra and considered a traditional Chinese fishing region by Beijing.

The intrusions into Indonesian waters prompted Jakarta to dispatch warships and F-16 fighter jets, and to call for Indonesian fishing vessels to relocate to the area. In the end, China decided to pull back, though occasional incursions still occur.

Since that potentially explosive confrontation, Chinese-Indonesian relations have quietly and steadily healed. This could have profound geostrategic significance for the United States and its competition with China in the Indo-Pacific.

Washington views Indonesia — the world’s fourth most populous nation, whose more than 17,000 islands straddle the Pacific and Indian oceans — as an increasingly important economic and security partner willing to stand up to Beijing.

China, likewise, seeks to enhance engagement with Indonesia to have a friend in regional disputes, secure access to Indonesian resources, and perhaps leverage Indonesia as a strategic bulwark against Australia.

For its part, Indonesia, like most other South-East Asian nations, has traditionally followed a policy of nonalignment to avoid angering either the US or China while simultaneously accruing benefits from both. From the US vantage point, improving China-Indonesia relations — even if they don’t fundamentally depart from nonalignment — would be very much unwelcome.

As of May, 90% of Indonesia’s 75.9 million vaccine doses received have been Sinovac vaccines. Indonesian President Joko “Jokowi” Widodo prominently received his Sinovac jab on live television — with the broadcast clearly showing the box labeled “Sinovac”, an important public show of trust for Chinese-made vaccines. China further plans to help Indonesia become a regional hub for Sinovac production and exports.

Meanwhile, Indonesia has continued to benefit significantly from economic relations with China, where Beijing remains Jakarta’s No. 1 trading partner. While Indonesian exports to China — including commodities such as petroleum, iron ore, and palm oil — rose from 2019 to 2020, Indonesian demand for Chinese products dropped due to the pandemic. The resulting decline in the trade deficit has put bilateral trade on a healthier footing.

Both countries’ participation in the Regional Comprehensive Economic Partnership is likely to accelerate trade further.

Jakarta is also a key Asian partner in Beijing’s Belt and Road Initiative (BRI), which is building and investing in infrastructure projects throughout Indonesia. In April, Beijing announced the completion of a major milestone in the construction of the Jakarta-Bandung High-Speed Railway, Indonesia’s flagship BRI project. While the project has been ongoing since 2015, and many complain that it is behind schedule, this has not stopped Indonesia from considering additional BRI proposals such as Chinese financing for the Lambakan Dam in East Kalimantan.

In an April phone call with Chinese President Xi Jinping, Jokowi reportedly referred to China as a “good friend and brother” — likely related to Beijing’s BRI and vaccine support. 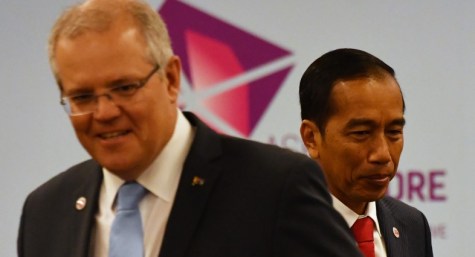 In other moves that suggest refreshed bilateral ties, Beijing early last month announced it would be sending three ships to assist in the mission to salvage the sunken Indonesian attack submarine KRI Nanggala. Although the submarine wreckage is located in the geostrategically sensitive Lombok Strait, and China very likely collected valuable oceanographic data during the failed salvage mission that ended in early June, Jakarta still accepted Beijing’s offer — perhaps because China footed the entire bill.

Washington had also offered to help, but Beijing swooped in more quickly. Since then, the Chinese and Indonesian navies have conducted joint naval exercises in waters off Jakarta, including search and rescue, formation, and communications drills. This exercise suggests that the Natuna Sea dispute — ongoing at a less intense level — can be compartmentalised in the interest of securing greater trust.

Then, on June 5, China and Indonesia held their inaugural “high-level dialogue cooperation mechanism” — a clear sign that Beijing and Jakarta are working to take bilateral ties to the next level. Indonesia’s presidential envoy and coordinator for China, Luhut Binsar Pandjaitan, met with Chinese foreign minister Wang Yi in Guiyang in South-west China Province to reaffirm their cooperation.

Taken together, these developments strongly indicate that Chinese-Indonesian relations are not just back on track but perhaps even improving. At the same time, however, China and Indonesia continue to face significant constraints that will likely limit the potential of their relationship.

Indonesia, for example, hasn’t forgotten the Natuna spat — not least because of China’s continued maritime brinkmanship in South-East Asia. Jakarta plans to expand its naval fleet of submarines and corvettes in the coming years, primarily to counter the Chinese threat in the Natuna Sea.

It has also established a new military base at Natuna Besar, the region’s largest island, and beefed up maritime patrols to address illegal activities, such as China’s, in Indonesian waters.

Jakarta’s warming to Beijing could also face a domestic backlash, as anti-Chinese sentiment in Indonesia has been on the rise. According to the latest annual “The State of Southeast Asia” report, the percentage of Indonesians polled who believe that China is a “revisionist power” jumped from 27% to 42% between 2020 and 2021. At the same time, the report also shows Indonesians to be generally optimistic about future relations with China. But they surely do not hold a favourable view of China itself.

As it cultivates closer ties to Beijing, Jakarta may also need to worry about heightened unrest among Indonesians related to China’s ongoing mistreatment of the Uyghurs, a predominantly Muslim minority, in Xinjiang. As the world’s largest Muslim country, Indonesia has tried to maintain silence on the issue to avoid complicating China ties. But that may prove to be an unsustainable strategy, especially as further details emerge on Beijing’s harsh treatment of the Uyghurs.

To some extent, the future course of Chinese-Indonesian relations will depend on the state of US-Indonesian ties as well. Until very recently, the Biden administration has done very little on South-East Asia, focusing primarily on shoring up the two traditional US allies in north-east Asia, Japan and South Korea.

But on May 31, US Deputy Secretary of State Wendy Sherman visited Indonesia as part of a three-nation South-East Asia tour (the other two were Cambodia and Thailand) for talks with Indonesian Foreign Minister Retno Marsudi. In another positive sign for bilateral cooperation, US Secretary of Defence Lloyd Austin has already spoken twice to his Indonesian counterpart, Defence Minister Prabowo Subianto.

But tactical missteps and mishaps — such as US Secretary of State Antony Blinken’s recent inability to set up a video connection with the foreign ministers of the Association of Southeast Asian Nations (ASEAN) — make Washington appear uncommitted about and disengaged from the region.

In the specific case of Blinken’s botched ASEAN meeting, Marsudi was reportedly so upset that she refused to turn on her monitor while waiting for Blinken to come online. Washington will need to work hard to make a better impression at upcoming bilateral and multilateral engagements, such as the ASEAN Regional Forum in August and the East Asia Summit in November.

No matter what the US does, however, it will have to live with significantly improved Chinese-Indonesian ties since the Natuna Sea standoff. Barring another major maritime flare-up, Beijing and Jakarta are likely to enhance their relationship in every dimension, which would make it more difficult for Washington to counter Beijing in the Indo-Pacific.

Going forward, the Biden administration may want to focus on assistance that would benefit Indonesia itself, not just the US in its contest versus China. For example, Indonesia would greatly appreciate affordable and effective US-made vaccines to fight COVID-19, for which it has nowhere near the supply of doses it needs.

Jakarta is also concerned about the risks of environmental degradation, another area for potential support.

In security, joint training in maritime, humanitarian assistance, and disaster relief capabilities would make sense. At the same time, the US should exploit the underlying tensions in Chinese-Indonesian relations and highlight — discreetly and respectfully — how China may be eroding Indonesian autonomy through its coercive behaviour.

These steps, taken over the long run, should both create a healthier bilateral relationship and promote US interests in the region.

Derek Grossman is a senior defence analyst at RAND and a former daily intelligence briefer to the US assistant secretary of defence for Asian and Pacific security affairs. 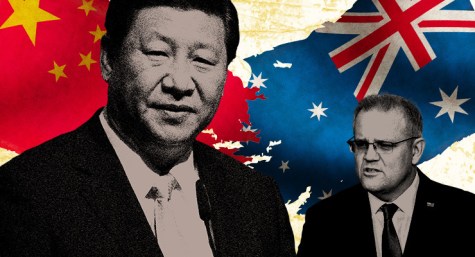 That is nice to hear ,all men are brothers, apart from the small percentage who foment war and regime change.

I think that Australia’s Politicians and leaders have always been afraid of Indonesia.
Look back at Indonesia’s push for Independence, Confrontation, Ache, West Papua,
Bali Bombing, East Timor. In each case Australia’s bombastic rhetoric has been based on the United Kingdom or the USA,
to provide pressure on the Indonesians, Communications support, Potential Heavy Bombers with Atomic Weapons back up,
Diplomatic pressure and payments to help stop people Smugglers. The Australian authorities can deny this as much as they like, but Indonesia is more important to the USA than Australia. While Australia ramps up the talk about standing up to China, it has ignored the potential problems with Indonesia in the future, on our doorstop.
The desire to go to war with China over Taiwan, is another example of ignoring the reality of Geography and History.
Australia and our people are not prepared for such an engagement nor the potential down side of such an action.
Such an action would just be another knee-jerk reaction to the USA’s desire to stick it to mainline China.
As Vietnam, Iraq and now Afghanistan have shown, when situations change the USA will back off and come to arrangements with its previous enemy, without thought to its Allies. The USA needs Australia for its Intelligence bases, It Investment in Australia and the tame responses that see Australia support the USA position in world forums.

“it has ignored the potential problems with Indonesia in the future, on our doorstop.” What are these problems, apart from any normal neighbourly issues? Indonesia is a large country whose major islands except for Java are relatively lightly populated. It has plentiful natural resources and for decades has chosen to spend as little as possible on its military, just enough to maintain basic internal and external security. The general attitude of Indonesians to Australia is friendly although Indonesians who become aware of our relatively huge military expenditure might wonder who it’s aimed at.