The government claimed it would vaccinate the aged care workforce by the end of March. But there was never any plan to do that. Now nearly 90% of that workforce remains unvaccinated.

Those four groups in the Commonwealth remit totalled around 510,000 of the 680,000-strong Phase 1a. On February 15, Scott Morrison and Greg Hunt committed in a media release that “Phase 1a remains on track for first-round doses to be delivered within a six-week period”.

On February 16 Hunt explained that “vaccination for residents and staff will be made available through residential aged care facilities where they live or work, and it will be administered through an in-reach workforce provider”. 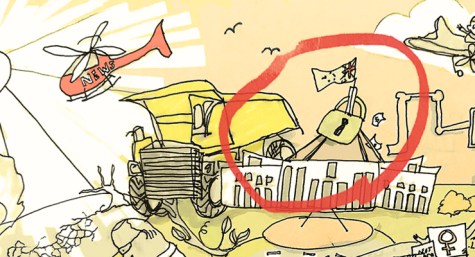 Three days later, Hunt said: “Phase 1a is the three priority groups, which Professor Murphy will set out, of our aged care and disability residents and their staff, our quarantine and border workers, and our frontline health workers … over the coming six weeks, which is our rough expectation for the phase 1a program, we’ll see that, progressively around Australia, the aged care centres and the hubs will cover — we seek to address all of the aged care centres in Australia.”

He later added that “everyone will be covered over the course of six weeks”.

We know now that, contrary to Hunt’s statement, the “in-reach workforce provider” was never intended to vaccinate aged care workers: Nine journalists today reported that one of the key “providers”, Aspen Medical, had never been contracted to vaccinate aged care staff. They simply got whatever leftover shots were available after residents had received their jabs.

Hunt is trying to obscure the extent of the failure by claiming “17.3% of Commonwealth aged care workers” had received a shot (at least Hunt, unlike Scott Morrison, accepts that the Commonwealth has some kind of role in aged care) but even in that spin, more than 80% haven’t.

The lack of any plan in relation to aged care staff vaccination is also reflected in the fact that Health hadn’t, until recently, even bothered to find out from aged care providers how many staff were being vaccinated. Why would they, if there was no plan to vaccinate staff?

No contracts to vaccinate staff. No effort to count how many staff have been vaccinated. Few actual vaccinations of staff. Aged Care Minister Richard Colbeck this week wouldn’t even accept he had any responsibility for the rollout of vaccinations to aged care facilities.

Aged care workers are now being urged to go to state-run vaccination centres to receive their jabs — in the same way that people with disabilities, and the people who care for them, have been told to stop waiting for the “in-reach workforce provider” to get to them and go get it themselves.

The now-standard criticism of the Morrison government is that all it does is issue a press release, and never actually delivers. In relation to Phase 1a — the top priority group in the government’s only priority for this year — this is literally true: the Phase 1a rollout was announced, but there was never a plan to deliver any vaccines to the majority of the people in Phase 1a. The media release was a lie, from a government that lies incessantly. 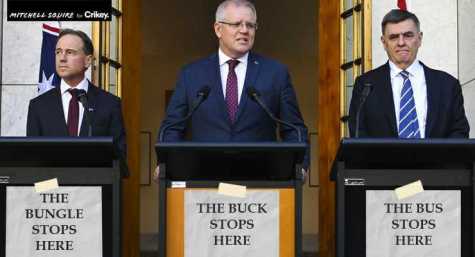 Is it now officially a race? If so, we’re dragging our heels on aged care 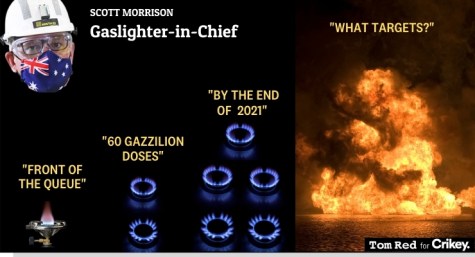 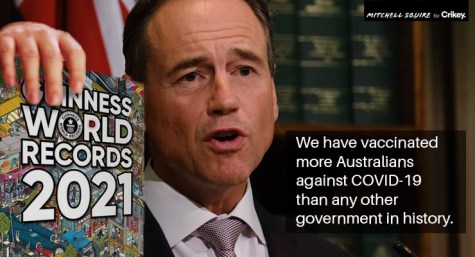 What an extraordinary revelation! The morrison government has lied. The only aspect of this that is extraordinary is that so many Australians seem to be untroubled by it. Although that is almost as extraordinary as the invisible cloak that the ALP is wearing.

For the sake of the nation Albo, partner Greens, and remove this cancerous government of despots. You can sort your differences out later. Australian values are being shredded before all our eyes. It cannot continue.

Couldn’t agree more. As a one-time Labor voter and now a paid up member of the Greens I would welcome a progressive coalition to counter this bunch of corrupt fossil fooled mammon worshippers.

ABSOLUTELY – surely both parties can see that

Unite the left – there’s a thought!

Dyslexia aside, how about untie the left from the moribund corpse that is “Labor”?

Tony from Melbourne
Reply to  Bref

Sadly true Bref – plenty of blood on the ALP’s hands.

They won’t have to be with Greens as a coalition partner.

True.
The Greens had no brief or role in the Gillard interregnum as a minority government – they only agreed to not supporting a No Confidence motion.
It achieved multiples more in less than 3 years than the current shower could/would in 3 decades.

Sadly true. Just read about Ben Wyatt stepping up as a Woodside non executive director after ‘retiring’ from politics. Shameful. Parliament has become a school for corporate wannabes. Just do the required term then leave straight into well paid jobs for maaaates in the corporations these people seem to think they represent…..corruption has destroyed both major parties.

Go further Albo, form a grand coalition of Labor, Greens and all progressive independents….and urgently update the Labor platform to encompass the urgent policies that are required to battle climate change and rebuild our social contract.
This evil government must not be allowed another term, no matter what compromises you need to make.

This suggestion has been made many times in this forum recently. However…this is just a recipe for instability. Wherever ‘coalitions’ are formed from small groups/parties, the resulting governments do NOT last.
Italy is the historical example of this…66 national elections and 59 prime ministers since the end of WW2…a ‘new’ government every 1.14 years!!
Another current example might be Israel…4 elections in 2 years…and continuing instability.
Is that what you want for our country? Coalitions formed from many ‘groups’ are NOT the answer.
Sure both major parties have problems…certainly the present L/NP government does…but the current reality of TWO parties of government here has mostly been stable over the past 100+ years.
And BTW…Labor governing alone could not possibly be any worse than what we have now!!
Think about it…and vote accordingly. Otherwise, the current putrid state of affairs will just continue, and NOTHING will be done about all the pressing issues requiring attention.

Post WWII, in most of the civilised world the northern euroids have had stable coalition governments – one party dominance of government is rare and quickly corrected, the UK being the exception with its iniquitous FPtP electoral system.
If a coalition breaks down it rarely leads to disruption or fresh elections but new alignments and tranquility continues.

From a marketing perspective, the thing that really matters is the announcement. What happens after that, if anything, is just boring detail that no one cares about.

The main thing is to move on to the next announcement.

Don’t know why you bothered writing this with a tone of faux-surprise at the news. Eeyore could have guessed it.

But still it’s unbelievable..What any political mileage would there be in screwing things up so consistently badly !?..Are they just completely sociopathic bat sh*t crazy as the default benchmark .?..( i know ,that’s getting mighty close to being rhetorical)

None of them hold hoses, mate. I don’t think they know that they actually have to do something to make the rollout happen.

You could argue we (the people) let them get away with it. Of course all of us here at Crikey know they are sociopathic bat sh*t crazy; but how do you get through to the Murdoch-zombies who vote for them?

They are incompetent and exist to funnel taxpayers’ money to their donors. A wonderful description of this mob that I’ve heard is “they’re a corporate consultancy pretending to be a government”.

More fundamentally, too many members of the Federal Cabinet have demonstrated that on many issues affecting our community – COVID, bushfires, refugees and asylum seekers left in limbo, Robodebt, sexual assault (of adults and children), whole communities with no water due to water theft, mass extinctions of native animals – beyond at best a few “thoughts and prayers” and grandstanding for the press, they simply do not care. The PM and a number of members of his government ascribe to a fundamentalist religious belief system that includes the idea that God will make you rich so for anyone doing it tough, it’s their fault; the Rapture and Second Coming is a literal thing that will happen so anything that can bring it on is to be welcomed. This is in large part why they don’t give a toss about the effects of climate change.

You can now jump on the “disaster covid19” payment. It’s been announced, now let’s see if they actually occur and whether the full promised amount is paid.

According to the WHO Australia refused to relinquish Commercial Secrecy Patent law on any Vaccine related discoveries from Australian Universities or Government Private investor listed companies like CSL. The entire world almost agreed to this protocol in order to ensure that the Developing world was receiving a fair price for immunization drugs in an attempt to avert continuous reinfection in the assertion that the same vaccine technology would be made available world wide. The head of the WHO mentioned how we were the only country (who is not a major innovator) in the vaccine area to negotiate directly with the Drug Companies Pfizer and Astra Zeneca in a late attempt to cover the fact we were no longer in the competition! In this action we were able to expose the price per unit to the international community and possibly raise the cost, expose the fact the less developed countries usually get inferior products all because we sort to cut our teeth on a rNMA vaccination despite the global community expertise, I suppose the Viral test that = HIV positive in our radical lab to human trials emergency health measures were a dampener to the suddenly Patent interested executive. IN fact the WHO head praised our statements and vigorous speeches, from various leaders on the huge shift in focus the commercial innovation, commercial secrecy and STEM. I guess the global opinion that no matter who warns us of the fleeting ability to sell Iron Ore, the island has a new reputation of flaunting international law, conventions and protocols the UN and the Hague are sick of us. I guess Hunt, Scomo et al were in the process of aquiring a medical innovation portfolio in CSL. I am still attempting to find the information on the Armidale blood reagent with the impounding of products by the FDA and the odd connection the NSW EPA has to say about the use of banned chemicals, reporting to the World Maritime Organisation/seafarers organisation . I guess that despite the innovation slogan and no real anchor in secondary industry we are on the verge of marooned rock eaters with no ability to object to the hand that feeds us as we export the edible and poison the poor or bloc access to the international FDA and EDA by stealth it remains that like the victims of slow boat to china we still have nothing to produce.