‘Broken’ industrial system yields low wages and growing productivity — but for how long?

The economy is in Goldilocks mode for business — productivity up and wages growth down. But what happens when unemployment falls to very low levels?

For the past few years under the Coalition, Australia’s economy has had poor labour productivity growth.

The big lift in productivity that occurred under the Rudd-Gillard governments disappeared in 2015, when measures like GDP per hours worked began turning negative on a regular basis, reducing the rate of overall labour productivity growth back to the levels seen when John Howard was in office.

But in the 12 months to March there’s been a better result.

Yesterday’s national accounts showed growth of 0.8% in GDP per hour worked in the March quarter, and growth of 2.5% in the year to March. Part of that is statistical — there was a big fall in hours worked over the past year, while GDP growth has bounced back strongly. But the March quarter number was solid (bearing in mind it may be revised in future releases) and real unit labour costs — the average cost of labour per unit of output​ — fell 3.2% to their lowest level on record. Real unit labour costs in the non-farm sector (which is most of the economy) fell more: 3.5%.

That means businesses are enjoying a higher productivity workforce without an increase in labour costs which is why the corporate share of income remains so high. In the March quarter it eased to 29.6%, but that was after three successive quarters where the share was more than 30%. It’s the first time since this particular measurement started in 1959 that corporate profits have been so high over a 12-month (four-quarters) period.

Conversely, the wages share of income hit an all-time low of 49% in the September quarter last year, the first time it had fallen below 50%.

These kind of golden conditions for business are supposedly from a broken industrial relations system in urgent need of reform — if you believe the government, business lobby groups, the neoliberals at The Australian Financial Review and News Corp. And that’s on top of the strong employment growth we’ve seen in the recovery.

While everyone is now on the same page in relation to the need for unemployment to fall into the low 4s and perhaps even to below 4% to drive wages up, it seems everyone has also forgotten what happens when you drive unemployment down so low: productivity slumps.

One of the dirty secrets of the Howard government’s WorkChoices regime was that it knew it was going to cause a slump in labour productivity — and refused to tell anyone. In late 2005, News Corp secured a Treasury paper under freedom of information (FOI) that showed it had warned that if WorkChoices saw an increase in employment, it would reduce labour productivity as lower-skilled workers and the long-term unemployed were drawn back into the workforce.

Then-treasurer Peter Costello had failed to ever mention that advice until forced to by the FOI release.

That slump duly occurred, with labour productivity growth plunging under WorkChoices before returning to health under Labor.

Trying to get unemployment down to the low 4s may well produce a similar outcome, even if the government has abandoned — for now — attempts to impose WorkChoices-style industrial relations reforms.

And that will complicate life for the economists, businesses, government ministers and commentators who insist that the only problem with wages growth in Australia is that labour productivity isn’t strong enough. 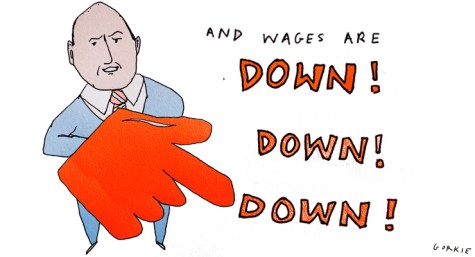 The MYEFO mystery: so much stimulus, so little wages growth

Can anyone explain to me how a government can have a baked-in percentage of unemployed necessary to running an efficient economy, while simultaneously having a policy that punishes people for being unemployed?

By their own admission, they NEED those unemployed! At least give them welfare that’s above the poverty line!

It’s like some weird game of musical chairs, where someone HAS to miss out on having a seat otherwise the game doesn’t work….but as well as missing out on a seat, the loser gets starved and vilified and made to look for chairs that they’re not allowed to have.

Or made to keep playing the game when the music has stopped.

When you promote the identity of “hard working Australians” those people who aren’t working / unemployed, are at the other end of the spectrum “bludgers”. Simple. So if you wish to identify as a Liberal, their dole bludgers, no empathy needed, how good is being a Liberal.
The system isn’t broken from a Liberal perspective it’s working the way its supposed to, plenty of vulnerable to exploit.
If you believe in the “fair go” you’ve been brainwashed, poverty isn’t an accident its deliberate

There is a new rort inplay at the moment. With the end of the year coming up some job provider managers are noticing that they are behind in revenue targets for the year or have maybe just decided to chase bigger bonuses. Whats happened as a result is that unemployed people on the books of some job providers are being summoned to appointments to review their job plans or whatever and being threatened with having their payments cut off if they don’t attend. Each of these appointments generates a payment for the Job Provider and maybe a bigger bonus for the operative. With no hope of getting anyone a job a job provider can still exploit their base to generate income from these appointments.
It looks like a rort and it is. It also looks like state sponsored terrorism as many of the people are in their mid 50’s or 60’s, have no hope of getting another job and already have agreements in place to meet their mutual obligations by spending numerous hours each week doing voluntary work.
Failure to attend these appointments because of a belief that their current commitment to volunteer work covers them means that some unemployed are having their payments suspended.
In other words they are being punished by the state for not letting the job providers rort the system.
Good one Scomo.