Victoria’s cabinet has met overnight to debate a potential snap five-day lockdown, the Herald Sun reports, while a senior Victorian minister has told The Age that a single mystery case could trigger a similar measure after the state’s active COVID-19 caseload jumped to 23.

Health officials have now identified more than 75 exposure sites across more than a dozen suburbs, notably a second AFL site from Sunday’s Essendon-North Melbourne game at Marvel Stadium. Individuals sitting on level 1, between aisles 5-28, or level 3, between aisles 6-29, have been asked to get tested and isolate until receiving a negative result.

The ABC also highlights three bars visited by a case on Saturday night in South Yarra and Prahran, while New South Wales health authorities are urgently contact tracing people from a regional sporting club, the Tooleybuc Manangatang Football Netball Club, who may have been exposed at an “event of concern” in Victoria.

The outbreak has coincided with — possibly even inspired — a boost in the number of Victorians seeking vaccinations, with yesterday’s record of 15,858 people almost doubling the 8269 reported on Monday.

Acting Premier James Merlino has also demanded urgency from the Morrison government on the Victorian proposal to build an alternative quarantine facility in Melbourne’s north, which the federal government is broadly supportive of but has warned a construction deadline of the end of this year is overly ambitious.

PS: In a reminder of a time and a government that handled the pandemic about as badly as it got, Boris Johnson’s former chief adviser Dominic Cummings has told a parliamentary inquiry not only that the UK’s COVID-19 response was a failure but Johnson, during his “let it rip” phase, suggested injecting himself with the virus on television to dispel fear.

According to The Australian ($), federal “Labor is moving closer to supporting Scott Morrison’s $17 billion-a-year stage three tax cuts” for middle-and-upper income earners and will not head to the election seeking to entrench the $7.8 billion-a-year temporary Low and Middle Income Tax Offset.

Reportedly, Anthony Albanese’s shadow cabinet is firming on the latter of four options on the stage three tax cuts — full repeal, suspending the tax cuts, carving out higher incomes, and endorsing the package as is — out of at least partial concern for Morrison’s post-budget “tax and spend” attack campaign and being linked to the Victorian Labor government’s recent revenue hikes.

The policy changes, which would have to be signed off by caucus, would come as the latest example of Albanese adopting a small-target electoral strategy (see also: junked franking credits policy; not outright ditched negative gearing and capital gains tax changes; refusing to name an above-poverty JobSeeker rate).

PS: In state political news, The Sydney Morning Herald reports that Gladys Berejiklian has filled two vacancies on the New South Wales frontbench, after John Sidoti was forced out amid a corruption hearing and Gareth Ward stood down upon denying accusations of sexual violence. Post-Upper Hunter byelection, NSW Labor leader Jodi McKay will also bring former leader Michael Daley back to the shadow cabinet amid a potential challenge by rival Chris Minns.

According to Al Jazeera, the Irish government has supported a parliamentary motion condemning the “de facto annexation” of Palestinian land by Israeli authorities — a first for a European Union country — and is set to vote on an amendment to expel the Israeli ambassador and impose sanctions against the country.

The news comes as United States Secretary of State Antony Blinken finishes up a regional tour of Middle Eastern nations to bolster a ceasefire between the Israeli government and Hamas. Blinken has pledged US$75 million in assistance to Palestinians, which he specified would not benefit the latter group, which Washington does not have official contact with and labels a “terrorist organisation”.

Over in the US, The Nation reports that more than 500 former Biden campaign and Democratic National Committee workers have signed an open letter demanding the president take “concrete steps to end the occupation in pursuit of justice, peace, and self-determination for Palestinians”.

Finally, The West Australian ($) reports that WA police commissioner Chris Dawson has called to raise the age of criminal responsibility from 10 years to 12, a shift largely supported by Australia’s attorneys-general but one that falls short of the UN Committee on the Rights of the Child’s recommendation for a minimum of 14.

The announcement comes at the start of National Reconciliation Week and follows National Sorry Day, which the Greens marked with a proposal for a national Stolen Generations compensation package.

The ABC is obviously the only side in this matter that’s taxpayer funded and I hope that they’ll conduct the litigation according to their obligations as a model litigant and do everything they can to make it expeditious and to not argue things that don’t need to be argued and to keep the costs down.

The former attorney-general implores the ABC — a body his government will have stripped of $783 million by 2022 — not to spend too much money fighting his defamation case. Porter also refuses to disclose if a benefactor has offered to pay his legal bills, but says he will adhere to disclosure rules.

“There are plenty of comments from Scott Morrison, and every other politician, that are half-true, or ignore key facts, or twist evidence. But they are the fiat currency of politics. We give them a pass. Morrison repeatedly saying that Labor’s commitment to net zero emissions by 2050 would push up prices and cost jobs — while state governments including conservative ones pursue similar commitments, and while reaping the plaudits of the press gallery for appearing to embrace such a target himself — could be argued to be a lie.

“But in fact it’s standard political rhetoric of misrepresenting your opponent and their policies. To start labelling such statements as ‘lies’ would be, to use Michael Herr’s line in Apocalypse Now, like handing out speeding tickets at the Indy 500.”

“But lies like this are about more than simply providing a ‘gotcha moment’ that highlights a politician’s hypocrisy. Morrison is still favoured to win the next election. And as independent Senator Rex Patrick says, years of obfuscation and misdirection are a good reason why trust in politicians has eroded over the years.

“‘Australians deserve far better from their elected officials. There has been a complete collapse of ministerial responsibility and parliamentary accountability and this needs to change,’ Patrick said.

“Part of the problem is that much of Australia’s media (*cough* News Corp) has got on board with the conservative mission, retaining only the semiotics of journalism — its look, its feel, its platforms — to promote conservative talking points. And, yes, part of the problem is the lack of journalistic resources to match the effort the Liberal government puts into what we politely call ‘spin’, but should recognise more colloquially as ‘bullshit’.”

‘I have no fear now’: Yang Hengjun’s final message to sons before trial

The Speaker snapped in question time on Wednesday – what took him so bloody long — Katharine Murphy (Guardian Australia): “By 2.18pm, the prime minister was on his feet unfurling a talking point about Anthony Albanese being more interested in fighting Tories than fighting the coronavirus when Smith chided Scott Morrison politely to return to the specifics of the question — which was about delays in the vaccine rollout and the failure to build sufficient quarantine facilities. Let’s call that PM warning one.”

Abandoning Kabul represents all that is wrong in the West ($) — Greg Sheridan (The Australian): “The decision to withdraw Australia’s embassy from Afghanistan, and operate on a fly-in, fly-out basis, is one of the most depressing and telling signs of the utter, abject failure of 20 years of Australian, and Western, policy in ­Afghanistan. It is contemptible and pathetic, and a massive indictment of everything that is wrong with the Western strategic personality.” 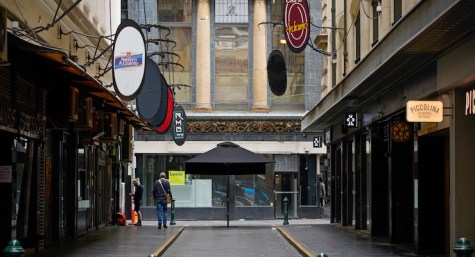 “Bloody hell Prissy Chrissy”?
The profundity of Porter’s hypocrisy re his “ABC/model litigant” tag?????
[Meanwhile, back at his ranch, he’s got Colleary and Witness K hog-tied and gagged – in his procedural ropes and gaffer-tape – awaiting their justice?]
It’s as palpable and demonstrably deep as that of the ‘Master of Cant’ – Scotty From Marketing’s.

And there’s more than the hint of dead fish about “Scotty’s Office”, highlighted again in his alacrity to tell parliament no less, that Kunkel’s “investigation” into his own office, that he runs/oversees, “found in the negative” – that a briefing against Brittany Higgin’s partner, did not occur – when it found no such definite thing.

Bloody hell II – I’m agreeing with Sheridan?
But with one reservation :- Why has he been so blind for so long to all those other examples of “everything that is wrong with the Western strategic personality” – while he’s been busy being paid to do their PR?