Victoria's budget forecasts years of wage stagnation for workers. But what do you expect when its biggest employer is cutting wages growth?

What remarkable sophistry governments engage in when it comes to discussing wages. And not just Coalition governments.

Last week’s federal budget predicted that even a fall in unemployment to levels not seen since the days before social media wouldn’t shift the dial on wages growth out of the doldrums — and casually blamed state government wage caps along the way. Nothing about the wages cap of the nation’s biggest employer, the Commonwealth public service.

At least Josh Frydenberg and his Treasury minions acknowledged a role for public sector wages policy in affecting wages growth. The Victorian government and its treasurer Tim Pallas would have us believe that wages growth floats free of any connection with what that state’s biggest employer does.

Pallas’ budget papers note that “Victorian wages growth had been subdued in recent years”, got worse during the pandemic, but “as the economy recovers and spare capacity in the labour market is gradually reduced, wages growth is expected to increase moderately over the remainder of the forecast period from the current very low rates”.

Not a word about Pallas’ own wages policy for his public service — which the budget papers elsewhere describe as a “rebalancing”.

“Employee expenses (including superannuation) are forecast to grow by 9.6% in 2021-22. The growth over the budget and forward estimates reflects the government’s response to the pandemic, increased service delivery, primarily in public health, mental health and education and an increase in the superannuation interest expense on the state’s defined benefit superannuation liability attributable to an increase in bond yields. It also includes the impact of rebalancing the government’s wages policy.”

That “rebalancing” is a cut in the Victorian public service pay rise cap to 2% from 3%, along with a cut in the guaranteed annual base increase for public servants from 2% to 1.5%, below inflation, and the same level as that of the NSW government. That’s the actual level of pay rises public servants get — as distinct from the total spend on employees in the public sector, which changes depending on how many people are employed.

The beloved-by-progressives Andrews government is thus further tightening its restrictions on wages growth which, as the state’s biggest employer, will inevitably filter through to the wider Victorian employment market.

Pallas’ wages growth forecasts are even lower than those of Frydenberg: from 2022, Victorian wages growth is forecast a quarter of a percent lower each year to 2025 than the federal budget projections.

Based on yesterday’s jobs data for April from the Australian Bureau of Statistics, that means unemployment will rise in coming months, because in April it fell to 5.5% in Victoria, seasonally adjusted — the same level as nationally. Unlike NSW, Queensland, Tasmania and Western Australia, employment actually rose, albeit marginally, in Victoria — a strong achievement given April marked the first month without JobKeeper.

In fact the jobs market took the end of JobKeeper pretty well: there was a net fall in employment of around 30,000 jobs, the first since September, caused by a 64,000 job fall in part-time employment, so it took a fall in the participation rate to produce a fall in the headline unemployment rate. But given the dire predictions of joblessness in the wake of the end of JobKeeper, the result was a strong one, and suggests the government got the timing of its withdrawal of JobKeeper about right.

Frydenberg was happy to take credit for the jobs numbers yesterday at a lunchtime media conference, but conveniently only held a presser on Wednesday before the weak Wage Price Index data for the March quarter was released.

Qantas won’t be helping the employment or wages growth situation in coming quarters: yesterday it announced the sacking of several hundred international cabin crew because of the delay to the reopening of Australia’s borders, and a two year pay freeze for 16,000 of its much-reduced work force.

The persistence of public sector wage caps like those of Pallas and Frydenberg continues to make life difficult for the Reserve Bank and its goal of wages growth sufficient to drive inflation up over 2% on a sustained basis, at which point it can normalise monetary policy. That still looks a long way off. 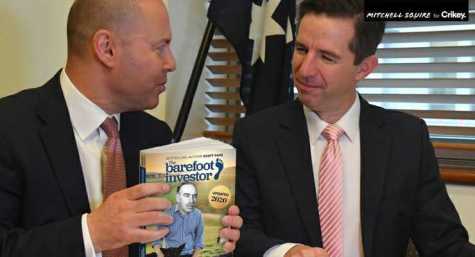 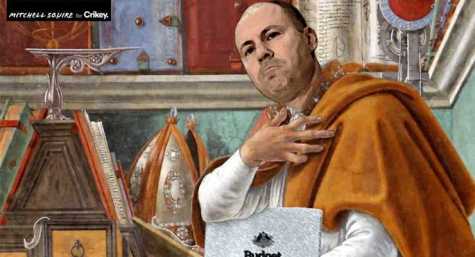 yes, the caps should go … and then the Vic government will be attacked by newscorpse with stories about idle public servants getting rich while “real” workers pay their wages

Morrison’s internal polling must be waning somewhere, so he has decided to attack a state governments budget to see if he can pick up a few more seats in Victoria.
They look like their desperate.

Wages policy in Oz is a case of the blind leading the dumb talking to the deaf. At least we have been saved from record immigration, so the biggest factor suppressing wages has been blow away. They’re all
ready decrying the vacancies for skilled hospitality staff ( hint: you could offer higher wages) professionals – a class that includes junior admin roles dressed up as jobs requiring tertiary degrees ( hint: you could train up our existing graduates).

Business in Oz has become fat and lazy on the back of immigration, neutering of the unions and favourable tax treatment to write off even more expenses. Productivity is not surprisingly low, has been since the LNP got in, perhaps business could look to hire locally, train up, pay better wages and look for answers that aren’t just the easiest solution – import someone trained up in another country.

It was sad but not surprising to see on Q&A this week Barnyard & some ‘Labor’ twerp agreeing on the need for more immigration to boost the economy.
End. Of.

The state governments should employ their available resources as required, and send the bill to the currency-issuing federal government which unlike the rest of us has its own Australian treasury and reserve bank, and is therefore constrained by resources, not money. Simple, but not understood by most people – and politicians – because we, being users of the currency, are indeed all constrained by money.

Last night Luke McGregor on ABC Q&A bravely had a shot at explaining why our children need not be on the hook for the trillion dollar covid-rescue government debt, as asserted by the mainstream ‘flat-earth’ economist sitting next to him; needless to say Luke got no support from Hamish McDonald or Barnaby Joyce who were flabbergasted by the idea, nor from the rest of the panel though I didn’t see Chris Bowen’s reaction.

But some in the mainstream are catching on:

ROSS GITTINS: Funding the budget by printing money is closer than you think

It is always fine to bash the public servants. Crikey often does it. In NSW not only has the already hopeless cap been lowered, but wage rises already agreed to and legislated have been stolen. None of these things ever apply to the pollies and their worthless flunkies.