Ultimately, most involved know there's only one long-term solution in the Israel-Palestine conflict — but neither side is prepared to pursue it.

Impossible problems tend to inspire outlandish solutions. The Israel-Palestine conflict is a case in point: just consider the Uganda Scheme (the early-1900s proposal to create a Jewish homeland in Africa) or former political adviser Jared Kushner’s more recent but equally absurd attempt to buy off the Palestinians with a little cash.

The Biden administration should keep the history of such gambits — and the fact that all of them failed — in mind this week as pressure mounts to intervene in the fighting.

It’s easy to understand why leaders around the world want the United States to do something: the skirmish between Israel and Hamas has already killed more than 227 Palestinians and 12 Israelis, trashed Gaza’s decrepit infrastructure, sparked the country’s worst intercommunal violence since the 1930s, and torpedoed the formation of a historic Israeli left-right-Arab governing coalition to replace Israeli Prime Minister Benjamin Netanyahu following the recent election.

Horrible as the situation is, however, getting too involved now would still be a mistake for Washington. While the two sides can be convinced to hit pause, there’s only one way to actually solve their fundamental dispute: a two-state solution. And that’s not on the cards any time soon.

Elephant in the room

The notion that a two-state solution — the creation of an actual, viable country called Palestine alongside a physically secure Israel — is the only way to finally resolve this very long, very bloody conflict may seem obvious. But it bears restating because it’s a truth all key leaders — in Israel, the US, the Palestinian Authority (PA), and the broader Arab world — have recently forgotten or simply ignored.

Let’s start with Netanyahu. For years, he has tried to convince Israeli voters only he can protect them — whether from war, terrorism, or the coronavirus — and safe behind their walls, they could disregard the Palestinian question while enjoying their comfortable prosperity. 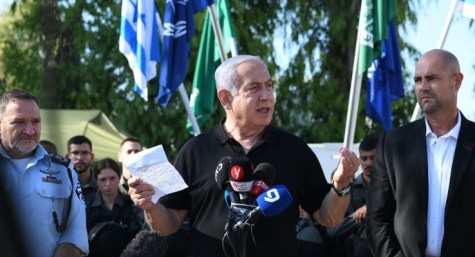 Once a grudging supporter of the two-state option, more recently Netanyahu has tried to sideline and diminish the salience of the Palestinian question in Israel’s national debate while focusing instead on bolstering his country’s vibrant economy, vaccinating its citizens, and normalising ties with Arab states.

Under former president Donald Trump, the US worked hard to facilitate this agenda. The Abraham Accords, which established formal relations between Israel and Bahrain, Morocco, Sudan, and the United Arab Emirates, were premised on the belief these and other Arab countries had come to care more about their own economies and security than they did about solidarity with the Palestinian cause.

And as 2020’s diplomatic breakthroughs showed, Netanyahu and Trump read the region right. After standing by the Palestinians for many years — during which the PA rejected one deal after another — Arab officials in the Gulf and North Africa had decided they were no longer willing to put that issue ahead of their own priorities. At the same time, they’d become increasingly frightened by Iran and recognised the fact that their enemy’s enemy could prove an enormously powerful asset and ally in this regional cold war.

Even Palestinian leaders effectively abandoned independence and the two-state solution. Although Mahmoud Abbas, the PA’s president, still nominally supports it, he’s now sick, 85 years old, and 16 years into a four-year term — and so far more concerned with preserving his own power than he is about making peace.

As for Hamas, it’s never cared about resolving the conflict. What it wants, instead, is to use an eternal armed struggle to justify its oppressive, undemocratic rule and corruption.

As the Biden administration now fields ever-louder calls from Europe, the United Nations, and left-leaning members of the Democratic Party to intervene, its decision-making should incorporate the hard truth that there’s only one way to really resolve the fundamental battle between Israel and Palestine — and none of the key parties are interested in making the sacrifices such a deal would entail.

Meanwhile, Biden should keep two lessons from the 20th century in mind. The first is as countries from Ireland to Israel to India to Indonesia have shown, the desire for national self-determination can’t be ignored or suppressed forever — no matter how much dominant powers may try to do so. The second truth, however, is combatants rarely if ever make peace before they’re ready — no matter how much outsiders push and cajole them.

That doesn’t mean Biden should do nothing. Israel has already accomplished its primary goals: degrading Hamas’s military capacity and reestablishing deterrence by reminding the Palestinians it will respond ferociously to any provocation. More fighting will just cause more carnage and more misery without achieving other strategic objectives. So it’s time for Washington to start pushing for a ceasefire, as Biden did yesterday on a call with Netanyahu.

As it does, however, Washington should be realistic about the limits it’s likely to achieve and should avoid the temptation — so seductive to past US presidents — to get drawn into a larger peace process. While the two sides can be pressured into holstering their guns for now, their underlying conflict will drag on until their fundamental grievances are addressed.

The only plausible way to do that is with a two-state settlement. But neither side has the capacity or is in the mood to strike such a deal right now — no matter how much Washington or other outside powers might wish they would.

Middle ground on both sides blown away in Gaza conflict

Genocide. Not a conflict. You absolute coward.

Well said, Craig. This pathetic attempt to turn Israel’s constant bloodshed into a two-sided conflict is just getting pathetic now. Where is the Palestinian Navy, Air Force or Army?

He’s probably a Jew. If Biden has the courage to stop funding the Israelis arms as A O C is promoting, things may change. Guy Rundle gave us a better assessment of the ‘conflict’ yesterday.

I did see that. It was very good. I’ve just got no more patience for people not calling this for what it very obviously is.

Same tired old arguments. It’s past time for this antiquated thinking to be made redundant. There is no hope for a 2SS. Israel has left nothing for the Palestinians to create a Palestinian state. For 29 years since Oslo and 53 years since the ‘67 war Israel has “eaten” up anything that might have looked like a Palestinian state, during this time it’s had the most acquiescent Palestinian leadership it could ask (pay) for. It’s time for a democratic, secular, bi-national state and move away from the apartheid system that currently exists.

Hamas’ “undemocratic rule?” They were democratically elected, in an election overseen by international observers. Oops. Although, as in Egypt several years ago, the “wrong side won” and they’ve been undermined ever since.

The problem with 2 states is unwinding the settlements. Looking at a map shows there is no continuous west bank anymore.

At this point 2 states is a mirage and 1 state would be either explicitly oppressive of Palestinians or become officially pluralist against the wishes of hardline Jewish groups.

Yes. As South Africa became pluralist against the wishes of hardline white groups. If it could happen once it can happen again.

The views shared here conveniently leave out the fact that the Israeli side continue to use provocation for domestic political benefit, knowing that Hamas and local Palestinians are at wits-end and will throw stones back. It is utterly cynical and tacitly supported by UK and US – soothing noises from Biden are merely a sop to the left.