The Morrison government wasting $600 million on another fossil-fuel powered generator shows just how out of touch it is on climate.

Scott Morrison and Angus Taylor’s commitment of $600 million to an unnecessary gas-fired power station in Kurri Kurri brings the government’s taxpayer subsidies of fossil fuels to more than $3 billion this year alone — while spending just $30 million in the budget on battery and renewable energy projects.

The list of recent spending for fossil fuels — on gas infrastructure and exploration, the discredited scam of carbon capture and storage, and this week’s monster $2 billion-plus handout to Ampol and Vitol to continue refining in Australia — dwarfs both funding for renewables and for adaptation, the politically correct form of climate action for the right, which assumes global heating can’t be stopped.

The figures should end forever the absurd claims by many political journalists that the Morrison government is somehow moving towards climate action. It is, in fact, ramping up support its major fossil-fuel donors. 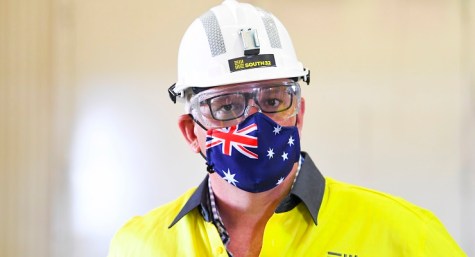 Its commitment to the fossil-fuel-based power station comes at the same time as the International Energy Agency, a body traditionally aligned with the interests of the fossil-fuel industry, issued a landmark report that directly challenges the government’s continued support for fossil fuels and its insistence that technology will deliver lower emissions without government action.

The Net Zero by 2050 — A Roadmap for the Global Energy Sector report lays out a path to net zero by 2050 — a target the government refuses to commit to even as other major economies commit to radically greater climate action.

Bear in mind that the IEA is closely allied with, and represents the interests of, fossil-fuel industries. It is notorious for underestimating — often dramatically — the uptake of renewable energy. Yet even it is demonstrably far ahead of the Morrison government and its media supporters on energy and climate.

As a supporter of fossil fuels, the IEA inevitably spruiks the use of carbon capture and storage, although it advocates more strongly for new — and unproven — “direct air capture” technology than the failed technology the government is spending a quarter of a billion dollars on.

What’s significant, however, is that even the IEA can see only a minimal — bordering on trivial — role for CCS in its path to net zero. Even by 2050, and assuming significant investment in all kinds of CCS, it forecasts only a tiny role for abated fossil-fuel generation in the overall energy mix, with solar and wind accounting for more than three-quarters of total production.

And emphasising how wrong Morrison was when he claimed “there is no credible energy transition plan that does not involve a greater use of gas”, even the IEA has gas rapidly diminishing as a fuel source.

When you’ve lost the fossil-fuel industry and its peak international lobbying body, it’s hard to overstate how out of touch you are on climate.

Morrison, and Australia, are in a fossil fuel fantasy.

Our taxes -> prop up their donors.

I find it hard to believe the pure socialist tendancy of this government when they don’t like the answers. I find the level of scrutiny and review in the press and by the opposition to be pathetic. Can you imagine the Australian’s from page if a Labor government announced this.

I agree, but maybe it’s more Crony Capitalism than Socialism.

Crony capitalism implies the existence of ethical capitalism which, of course, is a contradiction in terms.

Ethical capitalism is an oxymoron.

That statement is so ironic, it’s rusting!

Angus Taylor assured AM this morning that the liberals are still the party of the free market and that they only intervene when the market gets it wrong.

So yeah, a truly free market.

Puts me in mind of the 1970’s British TV comedy series “All Gas and Gaiters”. Our current government is even more dysfunctional and out of touch with reality, in spite of being ecclesiastically motivated according to its most ardent proselytizer. Who else could have turned such a dated theatrical farce into a modern day template for a political party out of time and out of place.

At least one could get a laugh out of All Gas & Gaiters – this Party’s “government” is not funny at all!

How can you not despair at the wilful stupidity of our politicians, the insidious influence of the dangerous fossil fuel industry in our politics and the gullibility of our poorly educated populace who can be so readily manipulated by the Murdoch press. When the last chapter of the woefully history of this planet is written, no person will have higher status as having caused most damage, more loss of life, beauty and delight, than Rupert Murdoch. He is, by far, the most insidiously evil creature that has ever prowled this planet. His legacy will be to have fomented the conversion a paradise into a living hell hole.

Emoticom, your world may be a little on the small side if you pick Uncle Rupert as the most evil creature ever. He had to kiss a lot of extremely rich arse to get ahead in the US. And the individual rarely succeeds alone. We are a tribal animal. He is just the face of a class of sociopathic wealthy lifeforms with little regard for humanity.

Agreed , he saw an opportunity to gain control of information and press it into service for the most wealthy while he takes a percentage.
But it is Rupert who orchestrates the formula for the propaganda.

He wouldn’t have his monopoly here if not for Howard’s change to the legislation regarding ownership of more than one media type, and then Abbott’s deal with Murdoch, IPA, BCA etc, which opened an even bigger can of worms because of his need to be PM. Now with Mortison as Prime Monster this country is headed to become that hell-hole super fast unless we can be rid of him and his cabinet of snakes.

It was PJK who ceded control to Murdoch and Packer père, the rest is history.

More money put into that White Elephant-Carbon Capture & Storage. May as well put money into Unicorn Farts as an energy source……that’s about as realistic as CCS.

All you good people have saved me a power of typing – hats off to you all!