Labor stays hunkered down, waiting for an election, while the Coalition attacks their territory

Anthony Albanese's Labor has declined the challenge to meet the Coalition's invasion of its home turf, preferring to keep its powder dry until the election.

Anthony Albanese’s budget reply speech declined to lay out any large-scale Labor response to the government’s embrace of big-spending, thereby — according to orthodox political commentary — missing an opportunity.

No big vision, no big initiatives — mostly criticism of the government, and not particularly for the budget, either. He announced a social housing fund, the upshot of which is probably $700-800 million (depending on investment returns) a year to build around 4000 homes a year, 20% of which would be reserved for victims of domestic violence and senior women.

No further detail on that, especially around how to stop cost-shifting by the states, which is what the NSW and Victorian governments did when Kevin Rudd pumped hundreds of millions into 20,000 social housing units during the financial crisis. And funding for apprenticeships in renewables industries, part of Labor’s focus on the economic benefits of renewables investments. 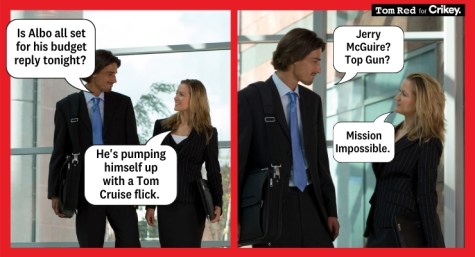 Labor needs big, bold ideas to kick the Coalition out of its turf

Otherwise it was a continuation of Labor’s small-target strategy, even on big spending announcements. If last year’s budget reply was a canny exploitation of an obvious gap in the budget — the Coalition’s planet-sized blind spot for female voters and gender issues — this year was about refusing to be drawn out from behind the defences to repel the Coalition’s incursion onto Labor turf.

Laying it out in such clunky military metaphors points to why Labor is alleged by political journalists to have failed, to have been too cautious — political journalism and commentary are so much easier when politicians are announcing things, preferably with lots of zeroes, in a contest to see who can attract voters. Instead, Labor continues to keep its powder dry and will likely do so most of the way to the next election.

It also reflects what most of us in the political industry believe: the budget is the big set-piece of the year, one of the few times that most voters — who by and large pay zero attention to politics — notice what’s happening in Canberra, if only to work out how they’ll benefit or otherwise. Why wouldn’t an opposition leader — well known for enjoying “fighting Tories” — seize the moment to launch a spending counter-offensive?

In truth, voters barely pay attention to the budget coverage and even one of the biggest spending budgets in history has already disappeared from the media cycle. The old rituals of the budget — the lock-up, the budget night speech and analysis, the Wednesday Press Club address, the opposition reply — increasingly look like political class navel-gazing. Labor’s small-target, wait-’til-the-election strategy may accidentally fit a tuned-out electorate that might have barely registered any colossal Labor spending promise.

All this assumes, of course, that come the election, Albanese’s Labor will have something big to unveil — that some big-picture thinking is going on to create a vision worth more articulating against a grab-bag of large-scale spending initiatives from a government without a coherent agenda or, now, even a dominant ideology.

For the moment, however, the old maxim that a bad plan well executed is better than the best plan poorly executed — or in Labor’s case, so far not executed at all — seems to hold.

How do you think Labor should respond to the Coalition’s latest budget? Let us know your thoughts by writing to letters@crikey.com.au. Please include your full name to be considered for publication in Crikey’s Your Say section.

I’m not having high hopes for Labor, the strategy of hoping that more people will vote against this government is a risky one. I can see the logic of keeping their ideas close to the chest, the coalition hasn’t got any so they keep stealing them, diluting them and wait for the cheers from the media on how good Morrison is. Whilst I’m not a fan of the ALP, objectively they are better then the extremely corrupt bunch we have now, even though it’s a very low bar and I hope they will bring the fireworks come election time.

Kind of hoping for a minority ALP/Greens government next time

Not sure Albo has the dynamism to sell strong policies, but Labor is probably right to shrug off this hugely political attempt to steal their territory and wedge them.

“Not sure Albo has the strong policies to sell,…” TFIFY

I must have listened to a different speech 15 mins ago.
I thought Albanese laid out a narrative of a party focused on people, future jobs, technology and changing the economy to work for people. The first 10 mins were pretty slow I’d agree, but, in the last 20 mins he really nailed what Labor were about. The “on your side” message at the end although repetitive was making a series of points about Labor’s priorities….

Trouble is, Albanese has to move a mountain of crap – perpetually dumped daily by the Limited News Party government and their media PR management – to win an election.

One of the key differences, Bernard, is that when Labor promises it will do something in government, it almost always follows through. When the COALition make promises, the only ones they ever keep are those they know will benefit their donors. Everything else becomes a “non-core promise”.