Crikey took a look at the Coalition's Facebook ad spending. What we found was fairly illuminating.

Much of the budget lead-up is filled with drops, hints and forward sizzles for what’s to come, delivered through the media. But a look at the government’s direct political communication can reveal what they are actually trying to achieve — and who they are targeting.

A scan through the current Facebook spending from senior government ministers shows that while the government has promoted the budget as a “women’s budget” to the media, they’re still aiming most of their advertising at their core bases of young men and retirees.

The messages the government is paying to promote

In the last week of April, the Liberal Party of Australia Facebook page began running more than 60 advertisements, all with the message “Lower taxes. Backing small business. A stronger economy. Secure Borders”.

While viewed by people from all states, ages and genders, they were predominantly viewed by — and it can be assumed, targeted at — men aged 25 to 34 and both men and women over 65.

The image promoted with the text varies based on who it’s targeted at.

A photograph with the prime minister in a hi-vis jacket talking to young workers? Seen mostly by men 25-34.

Another post seen mostly by those aged 65 and over was accompanied by a photograph of Morrison talking to two older individuals.

Advertising run through the Facebook page of the prime minister is more specific. His page is running advertisements on some announcements already made from the budget: about the Newcastle Airport upgrade, the northern Australia reinsurance pool, and the investment in Northern Territory defence.

For each of these advertisements, the posts are targeted specifically at their geographic areas and predominantly at men.

Meanwhile, Treasurer Josh Frydenberg is running broad ads promoting him ahead of the budget, while also running some specific policy-based ads that are more in line with the government’s public messaging.

Meanwhile, the Labor Party doesn’t appear to have settled on a response.

None of the Facebook pages for the Australian Labor Party, its leader Anthony Albanese or the shadow treasurer Jim Chalmers are running any Facebook advertisements relating to the budget or any of the already announced spending measures.

Meanwhile, the Australian Greens have launched a number of new advertisements through the Greens MPs Facebook page calling on profitable companies to pay back JobKeeper. 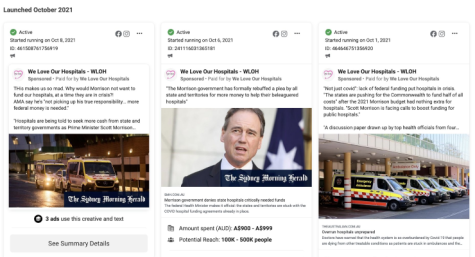 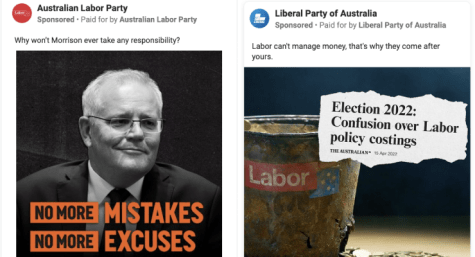 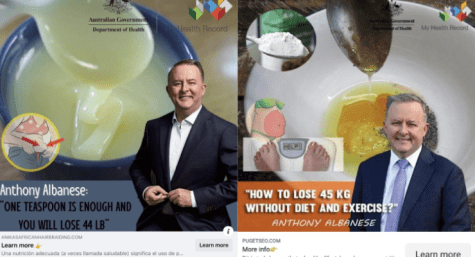 Are the cheesy photos in Morrison’s ads taken by his taxpayer funded personal photographer?

Should be mandatory to publish all policital/govt advertisments in one place with published info (eg. copy of ad, TV slots ad was played in; copy of web ad, info about criteria for it being shown eg. facebook, men 25+45 etc)

All hat and no cattle (texan saying). Dont watch it. Read the reports by proper analysts. The presentation will be all smirking self congratulation and spin. Dont vote LNP.

Why are the Liberal Party ( government) spending money on social media ads. I never watch them and I expect other people don’t bother either.

And, why on the evil social media, or is it saintly when it’s them using it?

Exactly what I was thinking.