When Qantas CEO Alan Joyce suggested the airline might consider relocating its HQ, Annastacia Palaszczuk jumped at the bait. With so many jobs on the line, she didn't really have much choice.

This article originally appeared at InQueensland and is republished here with permission.

Was Qantas CEO Alan Joyce ever seriously thinking about leaving his three-bedroom penthouse in a Harry Seidler-designed apartment building in Sydney’s The Rocks to move to Brisbane?

I have my doubts, but when Qantas invited state governments in September last year to bid for its Sydney-based head office, the Palaszczuk administration took the bait.

“Possible interstate move for national carrier HQ as it consolidates property footprint” was the tantalising headline on Qantas’ statement announcing a review of the location of its key facilities “as part of its recovery plan and efforts to cut overheads”.

The company revealed the outcome of that review last Thursday and, no surprises here, Qantas’ 49,000-square-metre head office is staying at Sydney’s Mascot.

In fact, nothing much has changed at all. Melbourne gets to keep Jetstar’s headquarters and Qantas’ heavy maintenance facilities, with its 750 jobs, remain in Brisbane.

The only real difference is that Qantas has been able to shake out who knows how many millions of dollars of support from state governments — Queensland included — with the crude but effective tactic of holding jobs to ransom.

The states really had no choice but to cough up, just to make sure they didn’t lose what they already had, let alone winning new investment from Qantas. 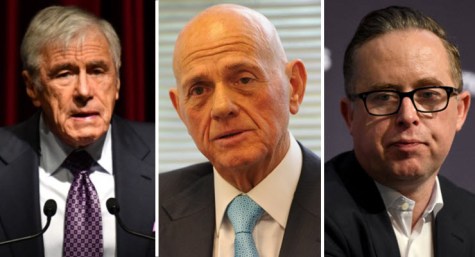 As Queensland Treasurer Cameron Dick put it, “this was a highly competitive process — Qantas put all of its property assets on the table”.

“We were in a fight with other states who wanted to poach jobs from Queensland.”

Joyce kept the shimmering mirage of a possible head office move in play to the very end of the process.

“Moving one or both of our headquarters was always a live option and there were times in the process where that seemed to be the most likely outcome,” Joyce said last week.

“Ultimately, once the final offers were assessed on a like-for-like basis, the set of decisions we made was the most beneficial to the group overall.”

And with the added benefit of not having to pack up the penthouse.

But what about us, the taxpayers, who stumped up the ransom to keep our state-based Qantas jobs? Was it beneficial to us?

Qantas and the states have declared any actual discussion of money is commercial in confidence.

“I play the maroon cards close to the chest, I’m not one to tip off our competitor states, particularly the big states of New South Wales and Victoria,” Dick said.

Which is a bit of a nonsense if you think about it. This is a one-off event — Qantas reviewing its physical presence around the country.

And we’ve already invested $200 million of state money in Australia’s only other national airline, Virgin.

How many more interstate bidding wars for major airline investment in Australia can there possibly be?

Perhaps Dick was just embarrassed by how much he had to fork out.

Queensland did win the promise of some new investment from Qantas, estimated to create about 100 new jobs in the state, which is good news.

But how much of that new, unspecified investment might have happened without government backing?

Mightn’t the decision to relocate some of the maintenance on Jetstar’s Airbus A320 fleet — initially on a trial basis — from Singapore to Brisbane have occurred anyway, what with COVID-19 and all?

It had already admitted, before last week’s announcement, that relocating new flight simulators in Brisbane and Melbourne “can reduce costs by millions of dollars a year” by training crew in their home bases.

I did ask Qantas why they needed government support to make the various investment decisions announced last week.

Weren’t they sufficiently robust to stand on their own merit? Or was Qantas simply playing one state off against another to get the best deal? I asked.

I was referred to Joyce’s already issued and less-than-informative public statement on the matter.

“Once agreements are finalised, Qantas will receive a range of benefits for these commitments, including payroll tax relief, tourism marketing funding, property rebates, training support and direct incentives — all of which are designed to reflect and help increase future economic activity generated by the group.”

Not very helpful, but you might be pleased to know that Joyce was most appreciative.

“Each state put a lot of effort into their offers and we thank them sincerely,” he said.

Qantas really has delivered a masterclass in how to shake money out of governments.

Battle of the Qantas chiefs: tourism is just a sideshow

Pity Qantas wasn’t still in public hands. Joyce would be a bureaucrat with his hand out rather than a stand over merchant on behalf of privateers.

When this ruthless scoundrel is not being paid obscene bonuses for conning our money out of sucker governments, he’s being paid bonuses for screwing his lowest paid workers – even if it means closing the whole airline down.

So taxpayers are propping up the shareholders returns during a pandemic.
How does one outside the Sydney bubble get to be treated so generously ?

Joyce the Deputy Prime Minister.
Morrison gives Joyce everything he asks for.
The international boarders would be open, if it was not for the State Premier’s stopping it.

…..and our cup of varieties would floweth over.
This is a very smart virus opposed by compromised profiteers.

Whenever I see the wretched phrase “ commercial in confidence “I immediately think “corruption “ and tune out.