A proposed ban on gamblers using credit cards for online betting has been opposed by — you guessed it — companies profiting from gamblers going into debt.

Australia’s gambling peak body is standing alone in opposition to a proposed law that would stop Australian betting companies from accepting credit cards for online gambling.

The bill, proposed by Centre Alliance Senator Stirling Griff, follows a similar ban in the UK that makes it a crime to accept, facilitate or promote credit card payment for online betting.

Online gambling in Australia is limited to TABs, bookmakers and betting exchanges. Chance games including pokies and casino-style games as well as in-play betting on sporting events are illegal. Online services licensed outside of Australia are illegal too.

Submissions for a Senate inquiry into the Interactive Gambling Amendment (Prohibition on Credit Card Use) Bill 2020 were published late last week.

‘No evidence of a policy failure’ in Australia’s gambling habits

Surprising no one, Responsible Wagering Australia (RWA) — which represents major betting companies bet365, Betfair, Entertain (Ladbrokes and Neds), Sportsbet and Unibet — has come out strongly against the restriction.

Its submission claims that there is “no evidence of a policy failure” regarding gambling using credit in Australia.

This would be news to the several other groups, such as Alliance for Gambling Reform, Suicide Prevention Australia and Relationships Australia, which made submissions about the significant harms from gambling in Australia.

Their submissions cite the billions of dollars of losses, gambling habits studies (such as a 2010 Productivity Commission report which found those experiencing high levels of gambling harm were four times more like to use their credit cards to obtain cash advances for gambling), as well as stories from those who’ve experienced significant harm as a result of current policies.

Alliance for Gambling Reform’s submission includes a case study of a 39-year-old legal professional who racked up more than $65,000 in credit card debt while gambling.

“It is far, far too easy to get what is essentially the equivalent of a pot of money with a huge interest rate associated with its withdrawal and no checking whatsoever as to the vulnerability of the applicant for credit,” the testimonial said.

How does using credit change how Australians gamble?

The RWA’s submission makes a very specific claim about a lack of evidence supporting the ban.

“There is a lack of compelling evidence of a direct link between the use of credit cards for online betting transactions and the incidence of problem gambling in the Australian market,” the submissions says.

While that may be true that this is limited evidence in a fairly new area of research, there is certainly evidence about how credit cards support gambling.

The Relationships Australia submissions cite a 2019 study by the Australian Institute of Family Studies which found that Australians were using their credit card to support their problem gambling. The study’s authors wrote that credit allowed people to accrue more debt while also having to contend with a high interest rate that led to a further debt spiral.

Relationships Australia said that this applies to online gambling, too.

“Many of our clients report that they do not feel like they are playing with actual money. They say that it’s ‘just a figure’, and amounts become ‘unreal’, and they easily lose track of what they have spent,” the group said.

And while the RWA claims that online gambling is no different to buying physical scratchies — a type of gambling that, coincidentally, you’re not allowed to do online in Australia regardless of whether you’re using credit or not — the gambling lobby group remains the only organisation so far to make the case for facilitating Australians gambling online with money they don’t have.

The Senate inquiry’s report on the bill is due by July 30.

Something wrong in the kitchen as Murdoch wins big on Sportsbet 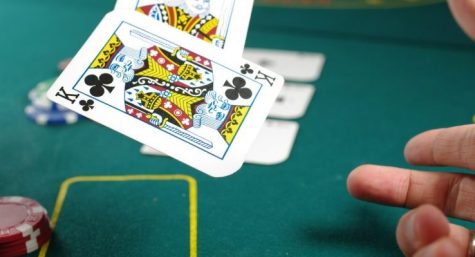 JobEnder: the unemployment scheme that Australia should bet on

Gambling is a tax on fools.

The gambler may be a fool but their family, and too often their friends and colleagues and employers are not. Gambling is an addiction every bit as much as smoking or drinking. In fact brain scans show the same processes with gambling as they do for other addictions.

If all people who gambled just had a little flutter – betting the same amount as they might otherwise spend on dinner or a show, the industry would go broke – or at least struggle to break even. The stupendous profits (and the sizable tax bribes to dependent state governments) come from the pockets of people who are addicted. Worse, many gambling addicts keep going until they have nothing left – except debt, and sadly, all too often, criminal charges for theft or embezzlement. Thus, the industry depends on creating new addicts to replace the ones who have no more money.

Was interested to see that Westpac offers a gambing block on their credit cards now. With my card details stolen a few months ago for spending on online gambling, it’s something I immediately activated. My other card provider doesn’t offer this service. Credit [no pun intended] to Westpac for this initiaitive.

The Act of Queen Anne 1710 and the 1845 modification
There are two ways a gambler can get credit.

Queen Anne enacted legislation which was to set the “legislative attitude” for hundreds of years. Her Gaming Act of 1710, (the Act of Queen Anne) rendered gambling illegal and entitled the loser to sue for recovery of the money. It also voided any agreement to lend money for gambling and any security given for such loans.
The Gaming Act of 1845 modified the rigor of the 1710 legislation. It rendered all wagering contracts void which, put very simply, had the effect that neither party could sue the other. The loser no longer had the right to sue for recovery of the lost bet. This meant wagers had to be made in cash and this had the effect that one gambler could not give credit to another – or if he did he could not sue for the debt. In the words of one judge, “a mere debt of honour, depriving it of all legal obligation, but not making it illegal”.
From 1845 on to recent times, statutory provisions maintained this position, effectively prohibiting:

British legislation carried over into Victorian Acts
Up until recently, the provisions in Victoria were contained in:

The case law attending this legislation is quite complex: dealing with lawful and unlawful games, innocent third parties and characterization of moneys used for gambling.  However, the thrust of these laws were clear – to make problematic gambling illegal and to deny access to the courts where games were legal.
Section 14 of the Instruments Act 1958 continued the prohibition on third parties form lending moneys to a gambler for gambling purposes enacted in the Act of Queen Anne. It did, however, contain a proviso that bookmakers could pay winning bets at racecourses with securities.