From chaos to triumph to abuse: what happened after more than 100,000 pissed-off Australians marched on Parliament?

Organisers of the March4Justice movement have been trying to keep momentum going, but they've faced a barrage of online abuse.

The March4Justice movement started with a tweet. Just 18 days later it culminated in 110,000 angry Australians marching against gender inequality across Australia.

Organisers of the movement are trying to keep the momentum going, supporting ongoing events including May Day marches, flash mobs and training for those who want to organise similar events of their own.

But they’ve recently faced a barrage of criticism online. Questions have been raised about how almost $120,000 of donated funds have been spent, including $1841 in office consumables. Former members have said they feel left out of the organisation, while the organisation’s founder Janine Hendry has been targeted by vicious trolls, facing rape and death threats.

On February 25, Hendry put out a tweet. “All of us extremely disgruntled women could travel to Canberra on March 8 and form a ring linking arms and with our backs turned toward the parliament and stand in silent protest,” she wrote.

With just 895 likes the tweet was hardly viral, but it set forth an unstoppable movement. A small group chat was started, consisting of the first people reach out to Hendry. This group would later be known as the leadership team, which included NSW-based singer, songwriter, actress and performing arts teacher Claudia Zappia and small business owner Judith Treanor, among others.

The group soon moved to a Facebook page and Treanor said it “descended into absolute chaos”. People argued over how the event should be organised, what it should be named, and how donations should be collected.

It didn’t take long for the abuse to begin, too: Hendry told Crikey she has been followed in the street, logged cybercrime complaints with the police and is concerned for her son’s safety at school. Some abuse was incredibly specific and targeted, detailing personal information. Others were broad-scale death and rape threats and targeted hundreds of volunteers.

“It’s just been devastating. It was terrifying and disheartening,” Hendry told Crikey. The organisation had to hire professionals to add security to the social media accounts following repeated hacking attempts.

Volunteers also received unsolicited sexual assault disclosures from victim-survivors via the organisation’s social media channels. The volunteers referred them on to 1800 RESPECT.

Things moved quickly. On March 3, the GoFundMe donations campaign was started, amassing $119,935 in just 21 days from notable donors including Lucy Turnbull and Jessica Rudd. On March 9, March4Justice was registered as an incorporated association in Victoria.

The night before the rally, Prime Minister Scott Morrison reached out to the organisation, offering a personal meeting, which was rejected.

On March 15, the historic event unfolded, with women and allies travelling from far and wide to add their voice to the movement.

Despite the event’s success, some of the leadership, including Zappia and Treanor, felt unfairly treated. They’d given up weeks of paid work, worked 18-hour days, weren’t reimbursed for accommodation, flights, car travel and hotels, and at the end of it felt they got little recognition: it went to Hendry, a Melbourne-based interior designer, small business owner and single mother.

Hendry has since had promotional materials developed on the success of the movement, though Hendry said none of this was paid for through donations. The GoFundMe was closed down so donations could be managed by the organisation.

Hendry said she’s aware there are better representatives for the movement and that March4Justice is developing an advisory board with experts and community leaders. She said volunteers are featured on the website, were thanked in social media posts and in a Zoom call on the Thursday after the march.

The organisation had originally agreed funds would be used to support the event, and the remainder distributed among relevant not-for-profit organisations. Three days after the march, regional team leaders made a unanimous decision to keep the movement going.

“We are seeking legal advice on the appropriate way to acquit the funds,” Hendry said.

A total of $12,027 was also spent on social media campaigns, which includes a $10,000 donation from a philanthropic organisation paid to a third-party organisation.

The bulk of volunteer support funding went to paying a mediator, an organisational psychologist, to speak to volunteers who were disgruntled with the movement or who wanted to talk about receiving disclosures at a cost of $6352. Just four people attended. Hendry said no volunteers have been reimbursed for their time, accommodation or travel costs. Legal agency Maddocks is working pro-bono with the organisation.

Costs listed on the website total $122,882 — meaning, once the social media donation is factored in, there are $7053 of unaccounted-for costs, though more than half of this may be due to GoFundMe’s fees. The organisation is still receiving invoices from ongoing events.

This month, March4Justice has a new webpage and logo, all provided by volunteers. There’s a donations link, though it’s not yet activated — instead, potential donors have to email the organisers to discuss donations.

The organisation will be audited in accordance with relevant laws.

Additional reporting by Tom Ravlic. This article was amended after initial publication with additional information from Judith Treanor and Claudia Zappia. 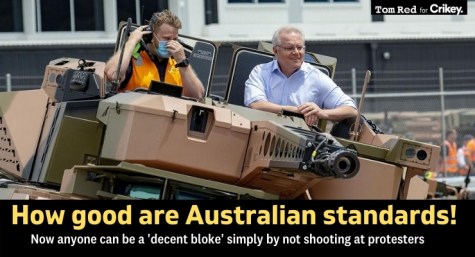 United we stand. Divided, we fall.

If you are tied together like careless mountaineers it makes a group disaster more likely.

Divided we stand united we fall. .the saying is the wrong way around.

This is when cracks appear and momentum is lost. Clearly defining the goal considering individual and group differences in perspective allows focus on similarities and the task at hand. Wars and survival have been won and lost on this basis since the beginning of human society. This includes sexual identification due to clearly different abilities.

Blaming nature, nurture or idolising a concept we cannot confirm will not harmonise. Mind the thought, not everything animal, mineral in the broad sense or plant harmonises.

I don’t know the answer because I am but a female human.

A group is always less than the sum of its parts.
The major parties require all candidates to sign the party line – independent thought is not just anathema but a sin, punishable by excommunication aka losing preselection.
To date this is NOT the case with the Greens though the woeful Di Natale tried to force its implementation.
Only Lee Rhiannon’s courage and determination stopped it.
Which did wonders for her future chances.

Note that these costs are small change. Such organisations should focus on effectiveness rather than audits..

No self-respecting politician could ever attract donations again if it become known they had dealt in such tiny sums.

I don’t know whether to laugh or cry. March4Justice are being as transparent as possible and still getting hammered, while the mob they marched against get a free pass for literally billions time and again- and that’s just the money!

This is how the left undoes itself every bloody time. Can’t get it together to fake a united front like the right does. In a fair and just world owning up to the discord would be a good thing, but that ain’t where we live.

I could be wrong, but from what i saw on twitter, a big part of the criticism the change away from advocating for women to “human”, and a sanitising of criticism of government, together with someone from the PMO being involved?

Surprised none of that is mentioned in the article – twitter isn’t a great source for complex issues such as this, so i clicked on this thinking it might go into some of the actual detail of management choices, and the shift in direction to ‘human’.

Have I got this right – $6352 paid to an organisational psychologist to speak with four volunteers who were ‘disgruntled with the movement or who wanted to talk about receiving disclosures’?

Where do I start……

Lets just gloss over all the bizarre claims by the group’, we’ll call people with concerns ‘disgruntled’ and Hendry ‘the single mum who was attacked’ -done their outright best to paint each side as troublemakers and victims, without outright saying it.
Who knows what the truth is, but this crap doesn’t clarify a thing

$1588 per volunteer – cheaper if they got a mental health plan on medicare
or
was the psychologist part of a committee snout in the trough skimming the available funds ?

oh you mean the lie that the emperor is perpetuating cause it makes him feel good aka “Virtual and online telehealth”.. yes they are actually doing neurology over the phone…you want to talk about justification for fees then have a gander at the costs and charges for telehealth. The whole system is rotten so why pick on women.. yep I call it sexist

Why don’t you try something constructive rather than just writing a derisive comment?