Stan Grant's got a new book out and he's hitting the hard truths about class, governments and their people. Will anyone stand up and take notice?

A drink to higher profits Fine-dining restaurants have always been a huge financial gamble. With very high fixed costs — labour and food — it’s the fickle wind of public opinion that determines whether you make a 3% or even 5% profit margin. But can you achieve economies of scale at the high end by combining restaurants in a group, à la McDonalds? Back in the halcyon days before COVID-19, Quadrant Private Equity spent a chunk of cash to find out.

In 2016 the Quadrant-backed Urban Purveyor Group paid about $60 million for Neil Perry’s Rockpool Group, which included some of the best restaurants in the country — Rockpool Bar and Grill, Spice Temple and Rosetta. Urban combined these “premium” properties with a group of more casual venues into a new entity, Rockpool Dining Group (RDG), which ended up with 50 venues, 3000 staff and revenues of about $350m.

RDG boss Thomas Pash said the following year that a “$1 billion IPO (sharemarket listing) was a realistic goal within the next three years”. But, post-COVID, those plans have been put on hold and this week RDG announced a restructure, splitting the business back into two parts: “premium” and “casual”.

The latest company accounts indicate that an IPO could be some time. For the year to June 30, 2020, the group reported a loss of $80m.

Today is Cinco de Mayo (fifth of May), the day when this column traditionally celebrates the 1862 victory of the Mexican army over the French by downing a margarita at Sydney’s Bar Patrón, my favourite of the group’s venues (now closed). If revenues need to increase, can I suggest that they reopen Bar Patrón in time for Day of the Dead? Por favor.

Quizmaster from the ranks Where do old politicians go after they “retire” from politics? Regular patrons at Balmain’s Unity Hall Hotel did a double-take earlier this year to discover that Larry Hand, the former mayor of Leichhardt Council, now runs the Wednesday night quiz.

Hand rocketed to fame in 1996 when documentary filmmakers Bob Connolly and Robin Anderson released Rats in the Ranks, a fly-on-the-wall look at the 1994 Leichhardt Council elections. Clad in a form-fitting leather bomber jacket, he stole the show as the archetypal political wheeler-dealer. When award-winning screenwriter Geoffrey Atherden wrote Grass Roots, a satire of local politics, Hand was the inspiration for the character of mayor Col Dunkley.

Albo, of course, is the current federal member for Balmain. And it was at the Unity that the first Labor Party meeting was held in 1891 — earning the pub its moniker as “birthplace of the Labor Party”.

Perhaps Crikey readers could suggest some of the quiz questions. Along the lines of: “Who lit the Offset Alpine fire? Name all the people on the Love Boat. Who bashed Peter Baldwin in 1980, sparking an inquiry into corruption in the right-wing of NSW Labor? Which Labor-appointed High Court judge issued the immortal line, ‘and now what about my little mate?’. Which tennis court did Paul Landa die on? And why did NSW Labor Premier Neville Wran say, ‘Balmain boys don’t cry’?”. First prize is a case of Albo Ale.

Grant opens up Journalist and author Stan Grant has a new book out, With the Falling of the Dusk. It tells the story of his working life, primarily the years earlier this century when he was an anchor and foreign correspondent for CNN in Asia and the Middle East.

Grant, 57, is a Wiradjuri and Kamilaroi man and the book expands on the themes of his earlier works — country, family, identity. But in this book, in the wake of Trump, Grant has included some very interesting musings on class.

“The West is in a turf war. Arrogant globalists have dominated power, playing Monopoly with other people’s money and roulette with the jobs of blue-collar workers. They have shut down industries and relocated factories, leaving people stranded in flyover ghost towns. They want people’s votes but give every impression of not liking the people themselves,” he writes.

Barack Obama accused the white poor of America of “clinging to their God and their guns” and Hillary Clinton referred to “deplorables”, Grant writes.

“Elites mock the food people eat, the sports they play and the TV shows they watch. It is a broad-brush caricature, I know, but all too real to many people.”

“They have been lied to, asked to send their children to endless wars, lost their houses in big bank Ponzi schemes and then watched politicians bail out the banks and seen their jobs shipped offshore, only to be told they can retrain for the tech sector. No wonder they are fed up.”

How to earn more than $2.5 million a year If you pay peanuts, you get monkeys, is the usual justification for paying NFT-level salaries to the (largely) white men who run our public companies. One of the favourite games of business analysts during the company reporting season is to make a bet on which loss-making company would pay their chief executive officer the most.

This column’s opening bid is for a company which can’t even blame its poor performance on COVID, because it produces oil and gas. Oil Search reported a net loss of $320.7 million for the year to December 31, 2020 — its MD, Dr Keiran Wulff, received a remuneration package totalling $2.6 million. Can any Crikey reader better that? Ten Dogecoins to the winner. 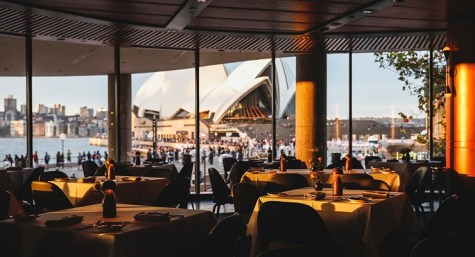 No, chef! Rise up against restaurant tyranny

What’s the answer to the question about Paul Landa?

Do you agree nobody should be given a job without directly relevant experience?

As usual Queenslanders would disagree: Queensland Labour was founded at a meeting of striking pastoral workers under a ghost gum tree (the “Tree of Knowledge”) in Barcaldine, Queensland in 1891.

The answer to all questions except the Landa one is: Graham (Whatever evil it takes) Richardson. And I would not be surprised if the Tennis Court in Vaucluse is called The G Richardson Park.