We tag along as the Tasmanian Green Party candidates hit the road to state their opposition to allowing development in the state’s national parks and talk about the salmon farm controversy.

Hobart is nestled in the foothills of Mount Wellington, or Kunanyi, which reaches up into the clouds a half-hour drive from the city. From the pinnacle you can see for nearly 100km as south-east Tasmania sprawls out into the sea. From the observatory the clouds are so close you feel if you just leant against the bannisters you could swipe a handful of one and take it with you. It’s not a bad place from which to launch a parks policy.

Greens Party leader Cassy O’Connor, Franklin MP Rosalie Woodruff, and O’Connor’s fellow Clark candidate Vica Bayley, along with a group of supporters, are doing just that on Tuesday morning, stating their opposition to the policy of allowing development in the state’s national parks. Tasmanian fishers and walkers rep Dan Broun, one of their crew, calls it “a secret sneaky process simply brought together for Liberal Party mates and donors”.

The setting is also not a bad one from which to explain the current controversy regarding the state’s salmon farms. Woodruff takes me to the edge of the platform to point out fish farms off Tasmania’s south coast, near Bruny Island and Betsey Island.

There has been momentum building around the issue since Richard Flanagan’s book Toxic and an accompanying piece in The Monthly dropped a week ago. Louise Cherrie, a former member of Tasmania’s Marine Farm Review Panel, had been telling the ABC that morning the industry was at a “tipping point” — growing too quickly, totally opaque, causing great environmental harm.

While the major parties have argued they will only govern with a majority, it’s becoming increasingly clear this can’t be taken for granted.

O’Connor notes that the Libs are missing their “vote hoover” (as she calls former premier Will Hodgman) in Franklin.

“I don’t know where they’re going to make big gains, so I wonder if maybe Peter Gutwein is losing a bit of sleep and wondering if he’s made the right choice [calling an early election].”

But she won’t be drawn on whether the Greens will be able to make gains from all of this.

“I think I’ve been in politics too long to speculate — even in Clark, it’s such a Melbourne Cup field, you wouldn’t want to be complacent about the Green vote.”

The polling tells them they could possibly regain a seat in Bass — mere hundreds of votes can make a huge difference in a population this small.

And O’Connor says she’s “more quietly confident” than she was in the last election cycle, when she felt Labor’s strong stance on gaming might have cost the Greens. She’s disappointed with the relative silence regarding gambling laws this time, not just from the majors but also the community sector: “I have had a few conversations about that with people in the sector.”

But of course, the sector relies on government for much of its funding. By the same token, Tasmania’s Environment Protection Authority, currently embroiled in the fish farming controversy, reports to the minister, and has a statement of expectation requiring they take into account the government policy of reducing “the burden of unnecessary regulation on business” — something which O’Connor says they’ve been assiduous in sticking to.

“So, by ‘under government’, you really mean…” O’Connor smooshes her thumb against the nearest surface. This happens a bit — she previews her upcoming interview with local shock jock Brian Carlton (the Spoonman) as “there’s always a bit of…“ and she flails about like a punch-up is going on.

We head out door-knocking in Glenorchy, a traditionally blue-collar area just north of Hobart — increasingly diverse, I’m told, but the households we encounter are largely white and on the older side. They‘ve almost all already voted, but there’s genuine engagement and broadly sympathetic questions.

The majority of my interview with O’Connor is at the Greens headquarters on Argyle Street, off to the side from a cluster of staffers and candidates planning the next week’s events. I’m on a couch with a portable CD player perched on the arm while O’Connor sits on the other side of the small bare room, on a chair she had to bring. It’s like a share house someone’s halfway through moving out of in 1998.

At one point I list the litany of Tasmanian banana republic tendencies — the most opaque donation laws in the country, the control of independent regulators by the state, and the seeming capture of state by big(ish) business, not to mention anti-protest laws. I ask how somewhere progressive enough to birth the first Green political party in the world got like this?

The entire office bursts into laughter. From one of the desks, someone says, “Welcome to our world!” 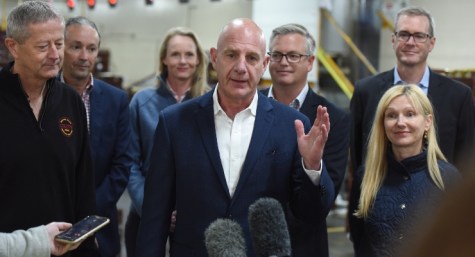 “I ask how somewhere progressive enough to birth the first Green political party in the world got like this?”
Let’s see:
a neo-liberal duopoly at State and Federal level across the country
compliant media friends
corporate interest party ‘donations’ to the duopoly that direct policy decisions.