Leaders stay guarded in balancing-act debate, but nothing is what it seems in opaque Tasmania

The final two leadership debates reminded us of the ever-present contradictions at play in the state's politics.

The hosts of Monday’s two final leadership debates in Tasmania’s state election are in keeping with the contradictions at play in its politics: one the Tasmanian Council of Social Services (TasCOSS), the other Sky News.

TasCOSS doesn’t beat around the bush with its acknowledgment of country — acknowledging, among others, Tasmania’s original tribes wiped out by “brutal invasion” — before a distinctly 2021 sort of event. It’s conducted online, with Premier Peter Gutwein, Labor leader Rebecca White, Greens leader Cassy O’Connor, TasCOSS CEO Adrienne Picone and a tireless AUSLAN interpreter all tiled on the screen like The Brady Bunch.

The audience has to mute and turn off their cameras, so of course we get a series of latecomers through the early questions, appearing and looming in the centre of the screen obliviously — I imagine the office manager who put this together screaming: “Turn off your fucking camera, Noeleen!” — sometimes for minutes before realising what’s happened.

Contrasted with some of the rhetoric that has made it across the Bass Strait, the whole thing is disappointingly polite and constructive. 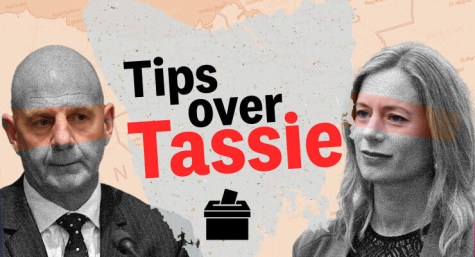 Gutwein plays it like a humble public servant, couching a lot of his answers with modest language (“I feel we delivered … “, “This is the situation as I understand it … “). At both events he dedicates most of his opening answers to thanking those in the audience for getting Tasmania through COVID-19, before humbly submitting that the Liberal Party may have had something to do with it.

He describes his determination to display a “level of compassion beyond what sometimes comes from [his] side of politics”, and he doesn’t shy away from criticising other Liberals on, say, how they handled the Brittany Higgins affair. You can see what he’s going for here, presenting the election as beyond politicking and Tasmania requiring nothing more than a continuation of his commonsense problem solving.

If nothing else, this spares us any culture warring or cheap gotchas. During the Sky News event in Hobart’s Town Hall, when Gutwein says Labor’s policy for free lunches for primary schools is based on “fantasy” numbers, he and White are arguing a testable proposition, not getting bogged down on whether ABC Hobart is encouraging kids to use gendered pronouns or something.

It leaves White to deliver much of the spice, such as it is. In response to a question about whether her government would resign if it failed to deliver on its promises, White points to Gutwein and says: “Well, this man should resign today.” She goes hard on hospital waiting times and education standards. This draws Gutwein out of his conciliatory mood and elicits his only real clanger of the day — on the free lunches program, his “you may as well send a dollar to a kid in a Third World country on TV” makes him sounds like one of those Liberals he’s been trying to distance himself from.

Meanwhile, White has to walk a tightrope on the timing of the election — hinting that Gutwein called it early to cynically cash in on his popularity due to successfully navigating the pandemic, without actually saying he’s popular or handled the pandemic particularly well.

Two things are striking. The first is the basically progressive assumptions underscoring most of the questions, even on Sky, wedged between ads for Cory Bernardi and Paul Murray. The second is the lacuna here: Tasmania has the most opaque donation laws in the country, even Labor is proposing jail terms for “serial protesters”, and then there’s the practical capture of the state by gambling interests.

Gaming comes up during the TasCOSS event, and even then it’s not from an audience member but from O’Connor, who points out the absurdity of discussing poverty in Tasmania without mentioning the role of gambling, as well as the opacity of tax rates Gutwein is proposing and Labor’s secret agreement with the industry. White and Gutwein are quick to correct the record on other issues but don’t respond to any of this.

The donations issue comes up on Sky. Both agree reform is needed, but White has more to work with, pointing to the Liberals’ inaction on that front. Indeed, the Sky debate goes well for her, with over half the 100 undecided voters present awarding her victory.

Clark, the electorate centred on Hobart, is Tasmania’s most left-wing, so this might not be surprising. But it points to the fact that Gutwein, unlike other incumbent state premiers recently, might not be able to simply waltz to victory on his COVID-19 performance. 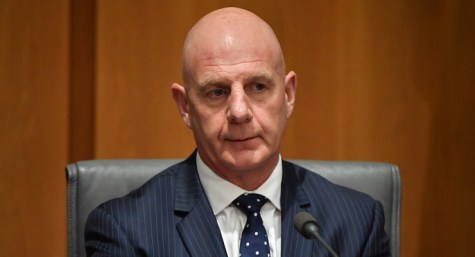 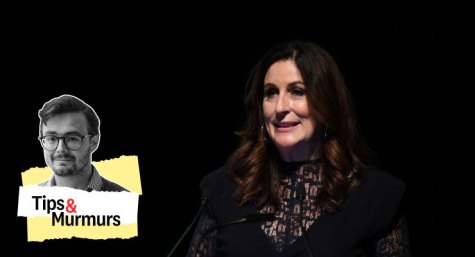 I reckon Rebecca would be not inclined to talk too much about the gambling industry, as it was that issue that sunk Labor last election – a massive attack campaign launched by the Libs and the Federal group which despite being outrageously unfair and immoral, was of course…a success!
Just like franking credits and climate change action for federal Labor, no-one wants to fall into that trap again.
Win first, do the good stuff once you’re in (hopefully)

So the Gambling Industry well and truly own Tasmania now. The HEC must be livid.