If you asked any South-East Asian diplomat or expert two decades ago which country, in 20 years’ time, would have the best functioning democracy with the least oppressive government in the region, you would have been hard pressed to find anyone that answered Indonesia.

Yet Indonesia — as well as its breakaway republic Timor-Leste — offers the best model for free and democratic societies. Twenty-three years after people power brought down the regime of General Suharto, it has freedom of the media and religion as well as relatively independent judiciaries.

I’ve considered all these factors and more to come up with an “indicative freedom ratings” of 8/10 (with 10 being the most free) for both nations. Neither is perfect. Islamic terrorism remains a constant worry in Indonesia. Timor-Leste’s politics remains in thrall to ageing freedom fighters. Corruption is too prevalent in both countries. But they are still in many ways bulwarks against the latest wave of authoritarianism sweeping Australia’s backyard.

The latest country in the region to fall back into the darkness of military dictatorship is Myanmar. A coup on February 1 restored the military to power after the nation experimented with democracy for just 10 years.

In many ways, the armed forces — led by the country’s new leader Senior General Min Aung Hlaing — have doubled down on the genocide of the Muslim Rohingya people that has already cruelled the nation’s reputation internationally. The coup has triggered strong internal resistance. The death toll is now more than 700, with more than 3000 people detained. There are as yet no signs of any resolution.

Neighbouring Thailand — whose military executed its own coup in May 2014, albeit with far more speed and less bloodshed — has not gone too hard on the Myanmar generals. After all, they have huge economic interests in the country.

It’s also unsurprising because Thailand’s spurts of democracy in the years since the military dismantled its absolute monarchy in 1932 have only ever been a veneer. There have been more than a dozen military coups in that time.

When Prime Minister General Prayuth Chan-ocha seized power in 2014, he promised to restore democracy within 12 months. Seven years later, the constitution has been rewritten, elections rigged, critics disappeared and the media suppressed along with dozens tossed into prison under extreme lese majeste laws for insulting the ascendant monarchy. A sectarian civil war with Muslim separatists also rages in Thailand’s deep south. The death toll is more than 10,000 in 17 years.

Cambodia’s Hun Sen has been in power since 1985 and he runs the country like a family fiefdom. With the financial backing of China, the nation of 15 million has effectively become a client state.

A small taste of real democracy in the 2013 quinquennial election saw Hun Sen’s ruling Cambodian People’s Party (CPP) come within a few seats of losing power. This led to the rival Cambodia National Rescue Party being dissolved and its leaders either jailed or hounded into exile. The CPP won 100% of seats at the subsequent poll.

Media freedom has been sharply curtailed in recent years, especially with the forced sale of the English language Phnom Penh Post, although religion in the majority Buddhist nation remains oddly untouched.

Things in Communist-run Vietnam appeared to be improving — and economically they still are — over the past two decades as its reform process took hold. It was increasingly looking like China’s more freewheeling south than its now dour restrictive capital. But just as China began reining in the animal spirits capitalism let loose, so too have the leaders of the Vietnamese Communist Party.

Despite being frail and 12 years past the official retirement age of 65, party secretary and military supremo Nguyen Phu Trong has collected more power than any post-war leader after being appointed for an unprecedented third term. He has conducted an anti-corruption campaign that has also served to neuter factional rivals in much the same way as China’s Xi Jinping.

Like their Chinese Communist cousins, the Vietnamese are particularly brutal with ethnic minorities but are far more lenient on religion.

Sultan Hassanal Bolkiah is both the head of state and head of government in Brunei, and the Legislative Council is appointed with only a consultative role. A form of martial law has been in place since the early ’60s, when an uprising was put down by British troops.

Religious freedom does not really exist in the majority-Muslim state. Sunni Islam is the official state religion and the only faith to receive state funding. There are few churches and temples, and none are allowed to be built. The country follows often brutal Sharia law with a veneer of common law thanks to a brief spell of British colonial rule.

The People’s Republic of Laos is wedged between China, Vietnam, Thailand and Myanmar (with a large slice of the drug-producing Golden Triangle). This mountainous, landlocked nation’s absolute monarchy fell to a communist insurgency (led by a disaffected prince) in 1975. For almost five decades, the Lao People’s Revolutionary Party has ruled this poverty-stricken nation.

Despite an abundance of natural resources and being on the doorstep of the world’s single biggest market for primary goods, Laos only gets by with foreign aid. Dissidents are disappeared. There’s no freedom of press or religion.

For the first 61 years of its existence, Malaysia was a one-party state. It was ruled by the Barisan Nasional coalition, under the leadership of the Malayan-nationalist UMNO Party. But the nation’s unchecked corruption came to a head with the multi-billion 1MDB scandal, and there has been a reckoning of its economic apartheid policy that favoured native Malays over the significant Chinese and Indians populations.

The ruling coalition was finally toppled in the May 2018 poll by former UMNO chief and nonagenarian veteran Mohamad Mahatir. That somewhat bizarre Indian summer came to a grinding halt less than two years later as he dithered over his succession. Now many of the politicians tied up in corruption scandals are once more running the country.

The nation’s poor treatment of migrant workers and Rohingya refugees is balanced against a reasonably independent judiciary and a vibrant media.

Singapore is often known as Asian Disneyland. It’s shiny, welcoming and well, Western — as long as you don’t chew gum, use drugs or take issue with the ruling Lee family-backed autocracy. But the brilliant economic success of this modern Venice (a city-state built on shipping and banking) disguises its deep flaws in terms of freedom and democracy.

It has a gerrymandered electorate, it exerts strictures on the media and it seems to enjoy executing criminals. It also houses an ethnic migrant underclass in dormitories and Malaysian satellite cities. It’s often noted that, at least prior to the rise of Xi Jinping, China’s Communist Party chiefs regarded Singapore as the ultimate model for its version of statist-capitalism.

The people-power revolution that ended the murderous regime of kleptocrat Ferdinand Marcos in 1986 was a blueprint for later movements — not all successful — in Myanmar, Indonesia and Cambodia. Since then, the Phillipines has had some good and some bad presidents, all restricted to just one seven-year term out of fear of another Marcos. But as horribly corrupt as some have been, they haven’t had the murderous intent of the incumbent Rodrigo Duterte.

His vile campaign of extrajudicial killings of drug dealers, users and other critics has tarnished the country. He has also done his best to corrupt the legislature and judiciary that have in the past proved some check on the Malacanang Palace. And he has cosied up to Marcos’ son as a possible successor. All this is severely denting the nation’s democracy.

Still, the Philippines does have fair and free elections, its freewheeling press remains uncowed and the ailing Duterte’s time is up in two years. His efforts to pervert the judiciary have not been completely successful and, ironically, the nation’s army remains independent. 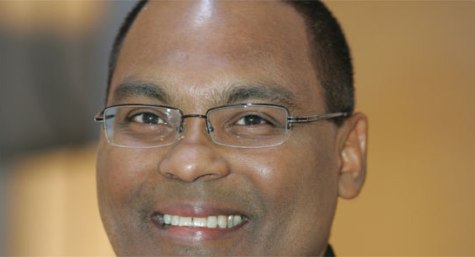 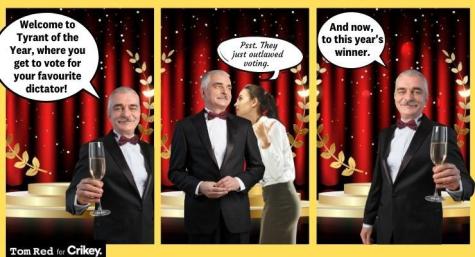 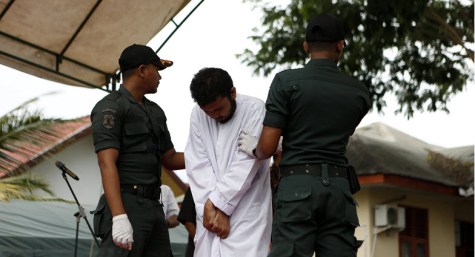 Sainsbury comes up with 8/10 for Indonesia, lists +’s and -‘s, and omits all mention of West Papua.

I suggest the Crikey ‘editorial board’ get on the blower to Jennifer Robinson, or John Martinkus.

Thanks awfully, Michael, for setting something like 700 million people or about half a billion adults to rights regarding your preferences for government.

Just out of interest, in which countries, listed, have you lived and used public transport on a daily basis?

Second question : what, in general, is their assessment of the the USA and of the system of governance?

Third, why is it that diplomatic relationships with the countries mentioned and the PRC are developing? Banks and Silk ‘n Belt perhaps? Would you suggest that American influence is improving?

The Philippines is kinda a special case with not a lot changing from the days of the Spanish concerning plantation control which wafts into the politics.

Perhaps you could take Dutton (actually the entire bench plus legislation since June 2019) and advise them.

Michael, not a bad ranking all told but as mentioned by one commentator, the treatment of West Papua should probably reduce Indonesia’s status by one or two points. Maybe sometime you could do a comparison of the two New Guinea’s.

Today’s story, “The corruption of democracy in Australia” is bought to you by the colour purple & a huge pink pig.

Other than Thailand these are all victims of the West. Some were “Bombed back to the stone age” not so long ago (I was there) and most of them had long periods of suppression as European colonies, with or without the bombs and CIA destabilisation. By comparison, our own record of human rights, right up to the present, is not much better. We’re ruled, in the final analysis, by a geriatric old lady who lives in a castle on the other side of the world (bless her). Our government here more locally is a mishmash of strange ideas and includes some very unstable people who kowtow to a religious lunatic (it’s a diagnosable illness, my Uncle Joe was one) and allow rapists in their midst. Not to mention allowing the destruction of the biosphere for the entire planet.

I think our neighbours are doing their best, as are we. It may not be a very good best, but neither is ours. Awarding stars is so kindy.

Yes. We have a laying of hands lunatic in the top job. I’d give us minus 2 stars at present. When Murdoch is no more, when Palmer cannot subvert the electoral system, when political donations are a thing of the past, we may pick up the pieces & continue with this very flawed democracy.

Yet some are out-performing Thailand which removes the bogey of colonialism.

If you look up the ‘Karen Army’, which has emerged in Myanmar in recent times, and is also very active in disputes around the Thai-Myanmar border region, you’ll find ‘the Karens’ are a product of British intelligence (such as it is).

Of course, you’ll need to find yourself a way of getting beyond the curating algorithms designed to present all knowledge as representative of Western benevolence. But, it’s there to be found.