Enfeebled by ideology, the federal government has shifted power to the states

The long-term transfer of power from the states to the Commonwealth has been abruptly undone over the last twelve months, and the vaccine rollout debacle will put things in reverse.

One of the long-running subtexts of neoliberal policymaking in Australia since the 1980s has been that Australia’s internal borders are a relic of colonialism that frustrate economic efficiency.

If we can’t abolish the states then we can make sure that regulatory differences between them are harmonised; that national — or at least east coast — markets in essential services like electricity and water operate effectively; that competition-policy prevents state governments that cling to government-owned bodies from unfairly competing with the private sector.

High Court decisions in the cases of Hammond v New South Wales and Ha v New South Wales on state taxes, and the Howard’s government GST, further subordinated the states to the Commonwealth in taxation matters.

In 12 months, however, the long transfer of power from states to Canberra has been dramatically reversed.

It is the states that have driven Australia’s successful handling of the pandemic, through the twin tools of lockdowns and border closures. State and territory borders, for so long mere lines on a map, have taken on very real force as roadblocks have been set up and police have imposed checkpoints.

Western Australia went further and essentially isolated itself from the rest of the country.

Business has been apoplectic about this reassertion of states’ rights, but to no avail. Voters have loved it; the harder the border, the more popular the government. In March, Western Australia’s Mark McGowan obliterated his political opponents in one of the biggest electoral wins in Australian political history.

The federal government has been reduced to a bystander on the issue, capable only of railing futilely at border closures. Christian Porter’s support of Clive Palmer’s failed attempt at defeating the WA closure only inflicted political pain on the government.

Now the process is being repeated on the vaccination rollout. The states have responsibility for hubs handling the vaccinations of frontline health care workers and have delivered nearly 680,000 doses. The Commonwealth has responsibility for primary care and aged and residential disability care, and has only delivered just over a million doses. Its rate of delivery of doses has barely shifted in the last week. It has only once exceeded 50,000 in a day. Virtually no one in the residential disability sector has been fully vaccinated.

But all that depends on access to vaccines, which is entirely within the control of the Commonwealth and which has been badly botched.

There’s no coincidence here: as Crikey explained last week, the Commonwealth has enfeebled itself when it comes to using its powers to deliver quality outcomes, services and regulations, while states and territories, which remain primarily service delivery bodies, have retained institutional capacity to run large-scale programs, especially in the health sector.

That means a significant transfer of power from the Commonwealth to the states, and one that isn’t likely to be reversed any time soon.

The nature of the pandemic and the likely need for ongoing pandemic controls at least into next year means states and territories will continue to exercise strong powers over borders and movement.

A greater role for them in the vaccine rollout will transfer the political credit the government was hoping to obtain from a successful rollout to state capitals. Any return to “normality” — in which the Commonwealth is strong and the states supplicants — is a long way off.

And there’s the psychological effect of the Wizard of Oz moment at the heart of the vaccine debacle: the Commonwealth has revealed itself as hopelessly inept and needing the help of other governments to perform even the basics of a long-planned but entirely bungled major program.

State and territory leaders, like the good politicians they are, can smell blood and fear a mile off. 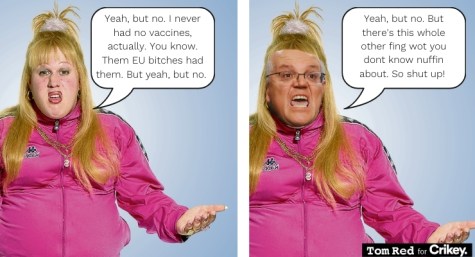 Vaccine stroll-out is history. Now PwC gets a second big bite from the COVID cake 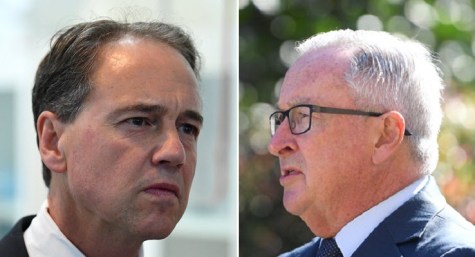 It is important for the electorate to recognise how little part the Feds have played over the last 15 months. If the Feds had made any meaningful decisions we would be in serious trouble now.
That means we should fight their attempts to take credit for anything.
It means we oppose their corruption and call it out. And in the end it means we vote them out. Tragicly they will never be punished for what they have done but they should be.

Morrison still has the support of the media and will exercise his power to make announcements in the knowledge he won’t be questioned. If Labor doesn’t ask the questions, the media certainly won’t.

Surely even those paying least attention must be starting to cotton on to the fact that Morrison’s “announcements” don’t lead to anything resembling action? Even when he makes the same announcement for the same service (or whatever) three times?

I wish this was true, but a large percentage of the populace either pay no attention to politics whatsoever, or view all of politics thru one partisan eye.
Come election time, the disengaged seem to vote for the devil they know.

Labor does ask relevant questions. Scotty and cohorts refuse to answer them.

Unfortunately that is simply untrue.
“Labor” is incapable of even formulating a relevant question because that would expose their complicity & incompetence.
Just days ago they were lauding increased coal exports beyond 2050.

I’m afraid Albo is not a leader, he is too timid and unoriginal.

For Labor to confront the organisations that fund them ,to call the media what it actually is, a tool for Neocon politics and persuasion, they would need to be prepared to drop most of their funding.

The media won’t report Labor’s questions, nor the non-answers.

States rights and the mandatory voting makes Rupert’s job of degrading Australia in the mould of Brexit Britain and Trumpian America so much harder.
Putin doesn’t approve either.

The Powers of the States have been rebalanced to what they should be – the Feds have usurped more and more powers with their Feds accomplices -The High Court which has consistently given bizarre meaning to words by their characterisation to mean what the Feds want it to mean – After all they are all live in the Canberra bubble and the judges are part of the Canberra community so they wouldn’t want the States to be able to do much , let alone what they didn’t give up in the Constitution – so the High Court has consistently eroded States powers.

The Feds can’t even get the meaning of quarantine rightful which they have sole responsibility as they import more and more Covid rather than responding to the Health needs of the nation.

Are you also a fan of a mutli-gauge railway system? I know I am. Ever been to the US and engaged with their quaint state tax system? All good stuff in a state run federation.

AnnaPal: “Keep talking Scott. You helped return my Government with an increased majority”.

Dandrews: “Ugh…this guy. Talking out one side of his mouth to National Cabinet, backgrounding against me to News Corp with the other”.

Had to laugh yesterday. Soon after the WA Libs had padlocked their tandem bicycle to a parking metre outside parliament house they started bleating about the WA govt. doing nothing to help those in a rent crisis. That’s the people who suddenly don’t have jobkeeper and the rental stability plan since the end of March.
What a joke the Libs are, they preside over minimal interest rates, excessive tax relief for property investors and a free renovation plan and wonder why rents are out of control. Idiots.
If they had introduced Jabseeker a year ago look where we would be now.

Was that from the Libs alone or from the whole Opposition Alliance? All six – count them – six of them? All right, plus another ten in the Legislative Council. Mr Morrison was here in WA a few days ago. I heard it was his first visit since 2019. Strange. You’d think he’d want to give Mr Porter more encouragement.

Further to that, I heard Mr Morrison went to Kalbarri to see the cyclone damage and make an Announcement. That was good. He makes very good Announcements.

Perhaps he missed his calling as an announcer at a large ( not too big) railway station.

Not really – most people would miss their trains because one cannot believe a word from his sneering mouth.

And lots of them sometimes many times over.

They may need a three-slot bicycle rack installed.

I think being booed comprehensively took the shine off the trip especially since he’d given WA a nice hug it didn’t want and prayed over it to remove evil McGowan spirits which it also didn’t want.
And even South Australia gave him the finger in response to his creepy hug and prayer.

“If they had introduced Jabseeker a year ago look where we would be now.”

Up that well known creek in a barbed wire canoe without a paddle. Jabseeker would have had to be administered by the states because the federal government is incapable of doing anything competently, unless it’s corruption, rorting, pork barrelling and claiming credit for the Premiers’ success.
The sooner we’re rid of this mob of criminals the better.