Australia will always remember where it was when it saw that nautical dance routine. Plus other tips and murmurs from the Crikey bunker.

You, me, dancing It’s our JFK. Everyone in this generation will remember where they were when they first saw 101 Doll Squadron gyrating in between a giant navy supply ship and an array of stony-faced Australian Defence Force figures (although it’s been suggested that this may be in part due to some creative cutting on the ABC’s part, which has since been amended, and indeed 101 Doll Squadron have released a statement this morning expressing their disappointment with Aunty).

Accordingly, the weekend’s event acts as a Rorschach test, assuming the shape of whatever the viewer imposes. Evidence of the army getting too woke? A general slipping of military standards (away from the core business of “applying lethal violence“)? Just plain great? That’s entirely up to you.

Apart from that, it’s a reminder of many other toe-curlingly awkward interactions between politics and dance.

There’s the 2017 WA Liberals (look how many of them there are!) all clapping at slightly different points along with Daft Punk’s “One More Time”. (Side note: Josh Jergas was a Nine journo when he tweeted this and has since become an advisor to Mark McGowan — we cannot believe his decision to dedicate his life to getting WA Labor elected wasn’t connected to this footage.)

Theresa May’s Hail-Mary attempt at saving her sinking premiership by repeating something she’d done at her altogether catastrophic 2017 party conference which seemed to make people… well, smile isn’t quite the right word…

Religious inconography It’s ironic that the image that launched a News Corp mini-Holy War is itself a perfect facsimile of a dystopian theocracy. The Australian and The Herald Sun just had to get one more story out of the outrage of Magda Szubanski sending some meanish tweets about Jenny Morrison.

It’s worth actually looking at the picture though.

This is not a candid picture of a public figure. Every part of it is deliberate — the picture of the queen (apparently, upon close inspection, resting against the back wall?); the exact positioning of Jenny, looming impassively like a storm cloud over the PM’s shoulder. This is a piece of political performance in which Jenny was an active participant. As such, if it reminds people of The Handmaid’s Tale, it’s not bullying to point that out.

Canadian Tux Look. It’s been a tough couple of years. So if the good people of Canada want their athletes to prioritise comfort over style during the closing ceremony of the next Olympics, I suppose we’re in no position to judge. Still, I suspect if this denim-heavy number was in a sketch show, rather than the official Canadian Olympic team page, I’d think it was a vaguely offensive stereotype.

Adelaide is the cruellest city We suspect that Adelaide’s InDaily are trying to push back against Adelaide’s (totally unfair, of course) reputation as the Rove McManus of states — nice but slightly dull — with the stories it highlighted yesterday, which makes the festival state sound like 1930s Chicago. Stories of cops charged with assault, corrupt magistrates admitting to deception and conspiracy charges, ex-Labor MPs charged with blackmail, potentially violent patients being turned away from crowded psychiatric wards. It scans less as an Adelaide news round-up and more like the first 15 minutes of a Charles Bronson movie.

Following on the “Go Down South With Your Mouth” tourist ad, we wonder if this is part of some kind of coordinated campaign?

Stumped A basic tenet of successful interviewing, however informal or brief, is to do a bit of research on your subject beforehand. A lesson learned by the journo who opened their pre-match interview with former Australian international cricketer and practising Muslim Usman Khawaja by asking whether he intended to get on the beers if the Queensland side he captains wins today’s Sheffield Shield final against New South Wales. Khawaja politely pointed out he didn’t drink. 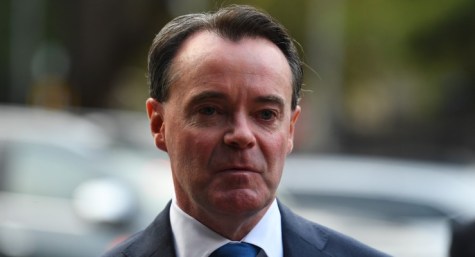 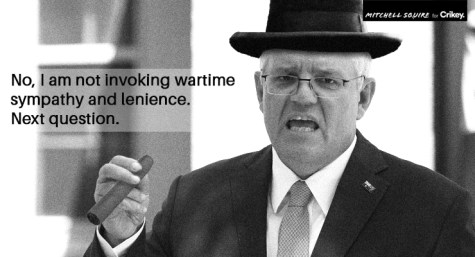 The photo of the Morrisons transported me to the early 19th century. The modern giveaways were the electric lighting & Morrison not using a quill.

Incidentally, why are there no artworks on the PM’s wall…

Morrison thinks art is only having his own mirror on the wall.

Ew. Such a seriously CREEPY photo. The Handmaidens Tale is bubbling along nicely in the Lodge.

Looking at this photo I wonder if mentally this pair ever left the Exclusive Brethren.

101 Doll Squadron is exquisite for being deeply weird and ironic.

Penny
Reply to  Been Around

Words fail one observing these kitsch US style events that surround power whether political, corporate or defence, simply proves how philistine many of the ‘top people’ are, while hiding behind a thin political/religious veneer of authority, for approval.