Good morning, early birds. Ben Roberts-Smith is being investigated for allegedly conspiring to silence potential witnesses for the Brereton war crimes inquiry, and the Department of Prime Minister and Cabinet has appointed long-time bureaucrat James Larsen to the position of deputy secretary and climate coordinator. It's the news you need to know, with Chris Woods.

Following their investigation into Ben Roberts-Smith allegedly burying USB sticks filled with damning photographs, The Sydney Morning Herald reports that the Australian Federal Police has seized evidence as part of a fresh investigation into the Victoria Cross recipient allegedly conspiring to silence witnesses for the Brereton war crimes inquiry.

New evidence includes letters Roberts-Smith allegedly placed in sealed envelopes and planned to send anonymously to SAS soldiers he feared would testify against him, as well as the existence of at least five “burner” phones he arranged to be purchased in 2018.

Elsewhere, The Australian ($) reports that a senior officer shown in one of the lewd photographs at the unauthorised on-base “Fat Lady’s Arms” bar in Afghanistan is now a colonel tasked with helping reform special forces culture.

For his part Roberts-Smith has denied allegations over the USBs, while Guardian Australia notes the Morrison government has reaffirmed support for Kerry Stokes as chair of the Australian War Memorial despite revelations over his financial, public and — through SevenWest — media support for the former soldier.

PS: In a peek at a potential future war, the ABC reports that former defence minister and current adviser to multiple weapons suppliers Christopher Pyne has made a graduation oration at the University of Adelaide warning that that “the strategic posture of the People’s Republic of China is not as benign as it was”, that the likelihood of a “kinetic war” in the Indo-Pacific is now much higher than when he first served as minister for defence industry, and that Taiwan is most likely the next flashpoint.

In the latest press drop suggesting Scott Morrison maybe-sorta-kinda will commit to a 2050 net zero emissions target — while forcing a “gas-led recovery” and leaving Tony Abbott’s relatively-pathetic 2030 goal untouched — The Australian ($) reports that the Department of Prime Minister and Cabinet has appointed long-time bureaucrat James Larsen to the position of deputy secretary and climate coordinator.

News that Larsen’s appointment has raised “expectations within Coalition ranks that the prime minister will endorse a target of net zero by 2050 within months” comes after Four Corners reported that Angus Taylor allegedly, and unsuccessfully, pressured then-chief executive of the Australian Energy Market Operator Audrey Zibelman in July to change unfavourable findings on gas in its landmark Integrated Systems Plan.

AEMO, which manages Australia’s grid and has not received millions from gas companies Woodside, Santos and Chevron over the past two decades, found that battery charging costs would need to stop falling and the price of gas would need to go well below $4/gigajoule by 2030 — a practically impossible scenario — for the fossil fuel to compete with batteries in electricity generation. Taylor’s office claims he was merely “seeking an explanation of the operator’s gas price modelling” and “undue pressure was not exerted on AEMO’s CEO”.

Taylor also denied that his departmental secretary pressured head of the Energy Security Board Kerry Schott to resign for a similar refusal to get in line on gas; claimed the government rounded the projected loss of Liddell power station from 154MW to 1000MW because “that’s reliability, there’s also affordability”; and alleged donations from gas companies do not influence policy positions.

PS: Because not everyone might buy that last line, The Sydney Morning Herald reports that the Centre for Public Integrity’s has warned the Morrison government that political donations are undermining public confidence in the “gas-fired recovery”.

The news comes as residents of Kalbarri, about 700km north of Perth and 170km north of Geraldton, begin the clean up after ex-tropical cyclone Seroja damaged what local authorities estimate as about 70% of the town’s buildings.

PS: For an explanation on how global warming will mean disasters such as Cyclone Seroja are likely to become more intense and frequent, check out Jonathan Nott, a specialist in reconstructing long-term natural records of extreme events at James Cook University, at The Conversation.

Finally, Guardian Australia reports that Queensland’s Liberal National Party has blocked Andrew Laming from recontesting his seat at the next federal election, after he backflipped on a decision to quit parliament in the wake of harassment allegations.

And in the latest from a separate Morrison government scandal, Four Corners has revealed that NSW Deputy Police Commissioner David Hudson denied detectives investigating the historical rape allegation against former attorney-general Christian Porter permission to travel to South Australia to interview the complainant. Porter denies the allegation against him.

[REPORTER]: AEMO’s Integrated Systems Plan published in July last year also makes a clear case that if gas is going to compete with batteries in electricity generation, the price will need to be well below $4 gigajoule by 2030 and beyond. And that battery charging costs would need to stop falling. Now, why did you feel it necessary to try to pressure Audrey Zibelman to change those conclusions?

Well, look at the end of the day, there has to be a balance in the system and gas is part of that balance. Batteries can play a particular role over shorter durations … but the longer duration storage or the longer duration backup overnight or during periods when we’re getting less sunshine or wind, we actually need a source of energy [parliamentary bells ring overhead] Can I just, is that me? Sorry, mate. I have no choice.  [leaves room]

While a parliamentary vote interrupted the energy minister from not answering ABC reporter Michael Brissenden, his office claims “undue pressure was not exerted on AEMO’s CEO” and Taylor was merely “seeking an explanation of the operator’s gas price modelling.”

“So now we’re onto our fifth rollout schedule after the government brought forward its original schedule in January and boasted it would vaccinate four million people by the start of April.

“The penny might have now dropped with Morrison and his team that such is his reputation for mendacity and so disastrous has been the rollout so far that any new targets announced by the government would be met with universal incredulity. Even Scotty from Marketing can’t market this debacle.”

Prince Philip and me: how we (politely) shirt-fronted a prince at the Chelsea Flower Show

“I was actually closer to Prince Philip than most people realise. Literally.

“In 1973 I was living in London and was deeply involved with the anti-Apartheid movement. We were also campaigning for the liberation of the violently-held Portuguese colonies of Mozambique, Angola and Guinea Bissau.

“In May, the UK government decided to celebrate the anniversary of the Anglo-Portuguese alliance by sending Prince Philip to Lisbon to attend a triumphalist extravaganza hosted by the authoritarian Portuguese Government.”

“Former prime minister Malcolm Turnbull has accused the Murdoch media empire of assisting terrorists, pushing propaganda and acting as Australia’s most powerful political party through selective coverage. Speaking at the Senate inquiry into media diversity in Australia this morning, Turnbull stressed News Corp must be held accountable for the impact its coverage has had on Australia’s democracy.”

Revealed: the Facebook loophole that lets world leaders deceive and harass their citizens

Samoa’s stunning election result: on the verge of a new ruling party for the first time in 40 years

New AstraZeneca advice is a safer path, but it’s damaged vaccine confidence. The government must urgently restore it — Jane E Frawley (The Conversation): “Vaccine confidence can be fickle. There are many recent examples of established vaccine programs that have been undermined by unrelated events or errors. This has led to mass disease outbreak and preventable death. For example, in the Philippines, a new measles outbreak that infected 47,871 people in 2019 and killed 632, mostly children, was fuelled by a drop in measles vaccination spurred by concerns about a dengue fever vaccine.”

Government clearly planning a return to high immigration ($) — Judith Sloan (The Australian): “Why the Treasury’s recent population statement is worth looking at is that it points to the assumptions being made about future levels of net overseas migration. After just a few years, Treasury is expecting net overseas migration to return to its pre-pandemic levels, averaging about 240,000 a year. We have some further insight into the government’s thinking on future migrant intakes from the equally defective draft report released by the Joint Standing Committee on Migration on Australia’s skilled migration program. To say the recom­menda­tions are a disgrace is to be kind.”

Social media minefield trips up aspiring politicians — Nick Enfield (The Sydney Morning Herald): “Prominent Melbourne lawyer Josh Bornstein, a partner at Maurice Blackburn, has pulled out of a Senate race in the wake of ‘controversial’ tweets. The tweets in question comprise a series of unrelated posts in which Bornstein seems to have succeeded in communicating his views and his ‘colourful’ style. But after negative coverage around his social media behaviour, Bornstein has confirmed he won’t contest Kim Carr’s senate seat and he will support the eventual candidate.” 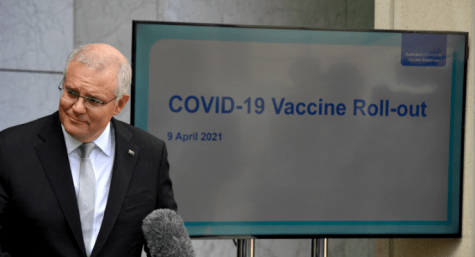 And who was “directing that traffic”?

Zibelman, Schott – why must they be so moral, ethical, ‘so hard to get on with’? It’s not as though governance is about or telling the truth : just look at Morrison’s.
Why can’t more people/”officials” be “helpful” to a government looking for excuses and “information” they can quote happily in their wallow of prevarication while playing fast and loose with the truth. Why can’t those unhelpful officials be more about “government service”? Supplying lines that can be used as in :-
“I am advised ….”/”I am informed …”/”I’m led to believe …”/”My information is …..”? To the likes of “I have not been informed about ….”?
Why can’t some such ethical people trim down on their integrity and join in being party to the production of BS that can be used as excuses for misleading us voting plebs? To take the blame of shonky government’s like Scotty FM’s?

Should I bury my fathers WW2 photo album, there are dead people in it?