Give smokers some credit: inflation would be even worse without them

The eye-watering cost of cigarettes means smokers shoulder the load to help the Reserve Bank get closer to its target range of 2% to 3% inflation.

Reserve Bank governor Philip Lowe has been slashing interest rates to never-before-seen levels, trying his darnedest to generate a little bit of inflation. He hasn’t got much. Consumer price inflation in the past 12 months was just 0.9%.

He takes credit for what little inflation there is, but if he went outside his Martin Place office and looked at the people huddled around the side of the office buildings, he might find those who should really take the credit: smokers.

Whenever official inflation numbers come out, most of the lift in prices is found in tobacco. As the next graph shows, when you take tobacco out, inflation looks even weaker.

Here’s actual inflation and what inflation would look like if tobacco was not included:

This graph is eye-opening. If, like me, you don’t smoke, you really can’t complain. We’ve been experiencing far less inflation than the official numbers report. Non-smokers not only have better lung function, we enjoy inflation that is consistently lower by 0.1% to 0.5% each year. That adds up over time.

The price of cigarettes in Australia is amazingly high and has been rising fast. If you last checked in with them a few years ago, you’ve probably got no idea how much they cost now. At Woolworths, my search showed the cheapest 20-pack is $27.50, and the most expensive 20-pack is $42.75.

The reason for the sudden price surge is excise. In 2013, Australia began the first of eight consecutive 12.5% increases in the tobacco excise. We’ve added 12.5% to tobacco excise each year since, and now every single cigarette has $1.10 in tax in it. The government collects a bit over $15 billion in tobacco taxes each year.

Do we collect more in tobacco excise than tobacco’s health costs? Well, we certainly collect more in tax than hospitals spend on victims of smoking-related illness, which was $6.8 billion in 2019, but perhaps not more than the lost well-being from those illnesses.

Australia has some of the most expensive cigarettes in the world. That is a good policy, and I support it. But every policy has its victims, and in this case it is people who haven’t quit. They are spending more and more of their income on tobacco. That’s actually a social issue.

Smoking is increasingly the preserve of the sick and the poor, and soaking them for taxes goes against a lot of what our tax-transfer system aims to do. Of course high taxes can be good when they deter smoking, especially among kids. But when high taxes fail to shift people off the smokes, we just make those people poorer and poorer.

If you haven’t quit yet, with the price at these eye-watering levels, perhaps you never will. Perhaps your mental illness makes it impossible.

All this makes me wonder. What sort of inflation do smokers experience? This is not something anyone measures, but with a few assumptions it’s possible to derive it.

First we need to figure out how much of their income smokers spend on tobacco.

Tobacco has a 4% share in the consumer price index. Data suggests the rate of daily smoking is around 14%. If we briefly ignore occasional smokers, the implication is daily smokers spend over a quarter of their income on tobacco. A horrifying thought. How many people are struggling to afford rent because their smokes (a $30 pack each day adds up to $210 a week) eat up their income?

Of course, the real share of income spent on smoking by smokers is probably a bit lower. CPI weights exclude things like mortgage payments, so share of the CPI basket is not the same as share of spending. And of course occasional smokers are doing some spending.

We can make an inflation series that shows the inflation experienced by smokers under those conservative assumptions. As you can see it is much higher than official inflation and non-smoker inflation.

Smokers live in a world of high inflation the rest of us are mercifully unfamiliar with. They’re the ones shouldering the load to help the RBA get closer to its 2%-3% inflation target range. When you see someone lighting up maybe give them a nod and a “Thanks, mate.” They’re saving the rest of us from higher prices.

However, soon Australia will go cold turkey on the indexation that has driven up tobacco prices. The final 12.5% excise rise was exacted in December 2020. Smokes will stop going up quite so fast from this year.

The RBA might get withdrawal symptoms, and may feel compelled to do even more crazy money-printing to generate the inflation that is their target. But for smokers the end of price rises will feel like… a breath of fresh air.

Do you think it’s fair smokers are hit so hard? Send your thoughts to letters@crikey.com.au. Please include your full name to be considered for publication in Crikey’s Your Say section. 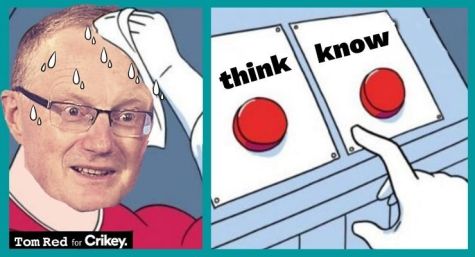 Today’s the day — or is it? The market isn’t so sure about a rate rise and maybe for good reason

The level of excise on tobacco is punitive and Puritan . It generates criminal activity and punishes the poor. Hypocrisy is an inherent part of all excise decisions; with tobacco it’s now 99% with the health concern element now barely at trace levels. And yes, I do enjoy the occasional cigar.

For those on low income, it might be time to put tobacco on the list of subsidised medications.

I gave up smoking some 15 years ago just because even then it had become a very serious wealth hazard.
I am now becoming impatient for the medical profession to start issuing “See we told you so” press releases about new statistical analyses demonstrating that the collapse of tobacco consumption has preceded an equivalent collapse in smoking related mortality and morbidity. How long will I have to wait?

The level of excise on tobacco is inadequate. Why? Because people still smoke. There is only one safe level of smoking and that level is zero. Every single puff is bad for you, unlike alcohol where the odd one or two is not harmful, although several Nanny State groups would have you believe otherwise.

If smokers were excised from Medicare and had to pay for all their health care completely privately it would be a different matter. That brave policy step would however get far more than the headline “Cigs, Beer, Up” in the tabloids.