We can disrupt Australia's culture of sexual violence as long as we keep rallying, keep fighting and stay informed.

This is the final part of #MeTooWhere? Crikey’s examination of the past, present and future of the Me Too movement. Read the full series here.

A couple of weekends ago I went to a small house party. It was lovely — a massive cheeseboard, Jenga, wine, and a diverse group of interesting people to talk to. But among those people there were some unsavoury characters.

The party went late into the night and as the alcohol flowed, the behaviour of several of the men changed. They groped and grinded on women the second backs were turned. Most, including me, told them where to stick it (causing one to leave the party red faced). But others struggled to rebuff their advances, pushing them away only for the men to come back more leery than ever.

I took one man aside and told him several people had noticed he was groping women who were barely able to walk, let alone consent. I suggested he leave the women alone. He became defensive, aggressive, and told me to “mind my own business”. Several others, including my friends and the host, called out his behaviour. I left the party before him, and don’t know how the night ended.

What continues to surprise me as more and more horrid allegations of sexual assault emerge is just how surprised some people react. In an interview with Nine’s Tracy Grimshaw last week, Prime Minister Scott Morrison said Brittany Higgins’ allegations of rape at Parliament House had caused him and society to “deal with some real home truths”.

“This has taken me deeper into this issue than I have appreciated before,” he said, prompting Grimshaw to retort: “Where have you been?”

The security guard who saw Higgins so drunk she could barely put her shoes on, then found her naked and alone the next morning. Ministers cleaning couches and erasing evidence. Man after man shocked at how many stories are coming out.

It’s Morrison’s business. It’s the security guard’s business. While it must be up to the victim to decide how they proceed with a complaint, it’s up to everyone to make sure they are safe to do so.

Despite having been pretty cynical about the Me Too movement in this series, I don’t want to detract from what has been achieved since it began. Laws gagging sexual assault survivors have been changed. Sarah Hanson-Young won a defamation action against former senator David Leyonhjelm after he made sexist comments about her. Some schools and universities are introducing courses on consent. Female politicians across party lines are forming a group, Women for Election Australia, to push for a better parliamentary workplace. There’s a growing intolerance to those who perpetrate sexual violence.

But inequality is still rife in Australia. Women of colour are more likely to be victims of violence, and Aboriginal and Torres Strait Islander people face higher rates of poverty, incarceration and police brutality. Pay equity has gone backwards and women dominate casual and part-time roles, leaving them with less pay and less superannuation. Advancing the safety and equality of society must be on the forefront of everyone’s mind. By doing this, we can also address the culture of sexual violence.

Look at policies and laws which disproportionally affect one part of the population, like the minimum age of criminal responsibility in Australia, the lack of support for women on visas escaping domestic violence, and the lack of funding for key support services.

Write to your local MP and ask them what they plan to do about sexual violence. Support organisations that deal with these matters.

As the movement’s founder Tarana Burke has said, “Me Too is a movement, not a moment.” 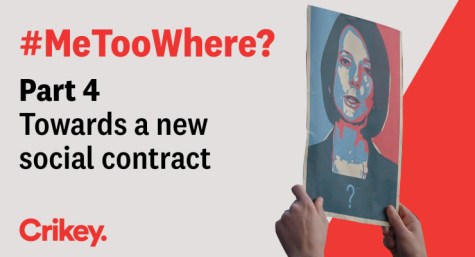 Watching Rachel Sewart grill Liberal women
on various Senate committees about the disproportionate impact on vulnerable women of cuts to Jobseeker, Dob in a Jobseeker line, and the Indue Card, display an appalling lack of understanding of power inequalities and their exploitation by the powerful to push vulnerable women into dangerous situations. These Liberal women have just been moved to powerful positions, but their performance on these committees makes me confident their presence will make no difference to improving the lives of any vulnerable person, but most especially not those of women.

Having the rich govern the poor, and the powerful the weak, is never going to end well. It’s a different reality. You have to FEEL the pain before you will do anything about it. You have to KNOW the problem to fix it. To learn to swim you have to be IN the water.

That’s it exactly, in a nutshell…

I do not really wish to seem trite.
It seems to me that wouldn’t be right.
Yet not one of us’d truly be here –
If not for a particular woman to bear.

A lot of the poverty is caused by high house prices, driven up by double income earning families. Increased incarceration rates have followed stricter domestic violence provisions which allow for retaliatory AVOs to be placed on mothers. The family court’s principle of shared care has had devastating effects on the women and children of controlling and violent men. The relaxation of marriage laws to include defacto couples has put a lot of vulnerable women in a double bind with men who don’t want to commit or contribute as an equal partner and provide financial details to Centrelink, for example, losing benefits. The problem is that it’s all now so contradictory. Women wanting equality with men are always going to be at a disadvantage, so it still depends on men. And what really is best for children? There is a lot of uncomfortable evidence showing the physical bond between a mother and baby is a primary biological need for full development up to at least 3 years of age. It’s usually other women that pick up the caring and domestic roles from a working mother anyway. I think it’s great that men are more involved in the lives of their children but is it really the best use of our lives to all be constantly forced to be productive individuals when it will and has inevitably seen some families with a great surplus and many falling further and further behind. Calls for further encroachment of the state into the private sphere are terrifying to me, as a woman, even a white cis one.

Australia’s decimation laws need revisiting. They protect the guilty at the expense of the innocent. They also provide a lucrative bonus for corrupt politicians who benefit hugely from these antiquated laws.

How could ANY sane rational man object to this? Who ever did this red tick need urgent intervention. A dangerous woman hating man. There can be no other reason for this red tick. Crikey. There are an awful lot of angry men on your site. Angry that women are demanding an end to rape perhaps? Worried they might be called out next? Whoever put this gutless red tick against my comment, its clear why. YOU ARE ALSO A COWARD.

Remember that much of it is about class.  Despite the façade of multiculturalism (to which that class is deeply hostile) and democracy, Australia remains controlled by an Imperial and Colonial class steeped in the mentality of 1788.

Many social problems result, including problems of entrenched unemployment, poverty, low community participation and fractured social relationships. People are increasingly regarded as units of production, or as sexually exploitable commodities, with a personal life that is secondary, indeed almost optional, but onto which business and government dump costs and responsibilities at every opportunity.

Ruling class interests are always viciously opposed to any egalitarian and progressive movement.  “Our” wealthiest, for instance, have through financial deregulation made incredible amounts of money from the indebtedness of most of the population; as the pips squeak, they need to focus peoples’ anger elsewhere. Fear, ignorance, and division all benefit that concealment. Conspiracists, clime-change-denialists, bully-boy politicians, asylum-seeker-haters, nuclear-power-fanatics, and suchlike are amongst foot-soldiers of the Den of Thieves (IPA, NFF, PGA, CCI, etc).

So only a coordinated attack on the class structure itself can be effective in clawing back some equality.  Condemn and oppose the gifts of power, pay and status to these arrogant products of a sectarian private school system, mentored from there into a political career based on exclusion of all lesser beings.  Criticism of Christian(!) Porter’s transfer to another Ministerial position is exactly what needs to continue.  It will be hard work. But to stop is to fail.