Sexual violence affects all women but not all of them are being heard, respected and empowered.

This is part three of #MeTooWhere? Crikey’s exploration of the past, present and future of the Me Too movement. Read the introduction here, part one here and part two here.

The Me Too movement has fostered a sense of community — women stand strong together, hugging, crying, supporting.

But there’s a distinct demographic at the heart of Australia’s movement: middle-class cis white women. This is a massive concern. Although sexual violence affects everyone, not everyone benefits in the same ways from calling it out.

As feminist scholar Nilmini Fernando told Crikey: “[White women] strive for equality with white men … which focuses on the idea that success and equality will trickle down,” she said.

Women of colour, she says, fight for justice and equality for the collective.

Second-wave feminism’s slogan across the ’60s, ’70s and ’80s was “the personal is political”. The movement focused on equality and discrimination, criticising male-dominated practices throughout society.

Feminist academic Eva Cox participated in many of the marches: “We wanted to change the values of masculinity so that the feminised stuff had the same value as the blokey stuff — like money and power and war and business.”

This isn’t to say women of colour weren’t left out of the movement, but overall its goals were more inclusive. Cox doesn’t think this is a case of looking at the past through rose-tinted glasses but is instead down to the rise of neoliberalism which has put free-market capitalism, privatisation and competition between individuals above welfare and the collective good.

One example of this, she says, is how we talk about childcare. In the ’80s it was framed as a necessity for children and families’ welfare. Now it’s discussed in terms of the impact it would have on the female workforce and GDP.

“We’ve got a very deteriorated sense of what community is and the morality of taking care of people because that doesn’t fit into neoliberalism because it’s largely done unpaid by women,” she said.

COVID-19 has exposed this disparity, with women holding most essential worker roles and shouldering domestic duties while working from home.

The latest budget pledges $150 million of previously announced funding to reduce domestic and family violence. This represents just 0.3% of the $500 billion budget.

Indigenous voices risk being ‘tacked on’

March4Justice was met with mixed responses from Aboriginal and Torres Strait Islander women and women of colour. Some believed the rallies incorporated their views but others, including Yuin woman and Aboriginal postdoctoral research fellow at the University of Wollongong Dr Marlene Longbottom, feels Indigenous issues are seen to be on the periphery.

“In Australia when you start to talk about diversity, you tend to see diversity in terms of not necessarily Indigenous women or women of colour but white women with different coloured hair,” she said.

“Our issues are never white women’s issues unless it’s actually happening to them.”

Aboriginal and Torres Strait Islander women and their children experience violence at 3.1 times the rate of non-Indigenous women and are 35 times more likely to experience domestic and family violence. They’re 11 times more likely to die due to an assault than non-Indigenous women. Three in five Aboriginal and Torres Strait Islander women have experienced physical or sexual violence perpetrated by a male intimate partner, compared with one in four women across all demographics.

Distinct from white Australia’s individualist culture, Longbottom says, Indigenous people think in collective terms, incorporating the family, community, and men: “Aboriginal women see it as responsibility and our place in the community, whereas white women believe it’s more of a rights issue.”

Sexual violence is never considered a standalone issue but as a symptom of inequality caused by colonialism. Indigenous Australians die from avoidable causes at three times the rate of non-Indigenous Australians and have shorter life expectancies. About 80% of Indigenous adults have weekly incomes below the national average earnings. Aboriginal and Torres Strait Islander adults make up around 2% of the population but 27% of the national prison population.

Nyungar woman and human rights lawyer Dr Hannah McGlade was the first speaker at the March4Justice in Western Australia.

“The local organisers were very respectful to Indigenous women,” she told Crikey, but she stressed Indigenous women had been fighting for feminism and equality for a long time — independent of white women.

“Society is paying a lot of attention here, but the problem here for Indigenous women is that violence has been normalised, excused and rendered invisible,” she said.

She said a national council on violence against Aboriginal women is an immediate necessity, as is an inquiry into murdered and missing Indigenous women and girls.

Consulting with members of the community is crucial, disability advocate Carly Findlay tells Crikey, but that didn’t really happen during the March4Justice rallies. When she brought this to the organisers’ attention on social media, she got defensive responses.

“I acknowledge the events were put together in a short amount of time by volunteers, but we’ve done the work on access and inclusion so this info could have been sourced and implemented,” she said.

“[Organisers need to] constantly consult with and include disabled people in planning and activities. Though I feel we need to move beyond being consulted with — we’ve spent a long time doing this. Just include us.”

“There’s a real ignorance of not wanting to really engage with our literature, whether it be academic literature or in the newspapers or in activism,” she said. “It’s not just a simple matter of inclusion. What I’m talking about is the power to shape the narrative and take control of it.”

Do you feel included in the Me Too movement, or are you one of the many left behind? Write to letters@crikey.com.au. Please include your full name to be considered for publication in Crikey’s Your Say section.

Next: What do we want the Me Too movement to achieve? Change, obviously. It must be more than just a mood board. 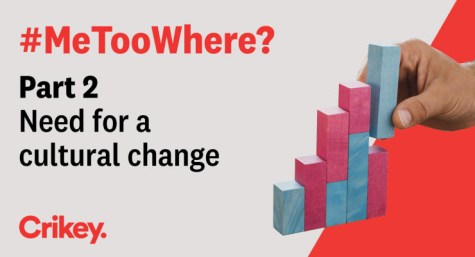 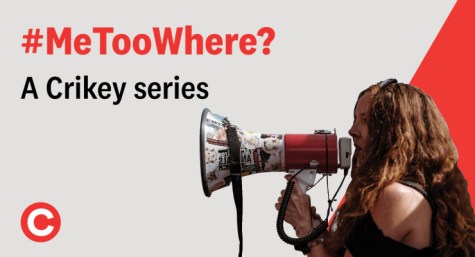 Is there any progress on untested rape kits in Australia?

Has Ms Higgin’s rape kit actually been DNA tested? That man may well have raped other women and not been identified.

It seems to me to be an egregious example of police failing to believe women that could be easily addressed and return concrete outcomes.

This may be peripherally related, but all of the policy change is meaningless if the institutions that should be protecting women don’t follow through and uphold enlightened policies or law.

Achieved a lot in a short length. And well backed-up with perspectives from three scholars, one lawyer and one advocate.

I find this so confronting when many aboriginal womens rights activists are so readily prepared to disparage, sledge and condemn “white” women for white supremacist attitudes and the horrors of colonization, while simultaneously heaping additional damnation on the same feminists for not appropriately and strongly forefronting their needs to counter misogyny and male violence.
What is the way forward feeling united in our need to counter oppression?

I find the ideas in this piece disturbing. Firstly (obviously) because of the horror so many women experience at the hands of men. Secondly, it seems counterproductive for any victim of men’s violence (or their advocates) to be pointing a critical finger at other women, whatever their secondary identity may be. Shouldn’t our fury be directed at misogynists?

Is your comment implying Aboriginal womens primary identity is as female and Aboriginal as secondary?

You make tons of great points but ill call you out on this one ‘Sexual violence is never considered a standalone issue but as a symptom of inequality caused by colonialism’.

The research I’ve read showed that sexual violence in island cultures was endemic before white men arrived. Those early anthropologists painted an ideal of islander lifestyle which turned out to be confected.

Yes, its a product of male dominance in those native societies, but i feel you are deliberately trying to conflate first nation rage towards white people and white womens rage towards men so as to create an alliance and maintain critical mass.