Dark Mofo's energy has been declining for some time, its transgression replaced by a theme park of a concluded artistic modernity.

Given that David Walsh, founder of MONA and Dark Mofo, made his fortune off gambling, it might have been worth taking a bet on when his festival of transgression would eventually really land itself in it. The “we want your blood” controversy currently engulfing Dark Mofo would appear to be it.

The festival — which takes over Hobart for a couple of weeks, usually in the winter — advertised with a raw red poster and alert for Indigenous people to donate their blood so that it could be soaked into a Union Jack.

Artist Santiago Sierra described it as a comment on colonialism, presumably the horrors thereof. Indigenous and other artists disagreed, to put it mildly, and more than a hundred participants signed a petition demanding not only the artwork’s cancellation, but that Walsh’s MONA complex thoroughly reform its curatorial practices, have all staff and management undergo cultural awareness training, and various other reparations.

Dark Mofo director Leigh Carmichael looked like he might tough it out for a while before he caved, as did Walsh, cancelling the work and adopting the language of anti-colonialism and trauma deployed by the protestors who had demanded that Dark Mofo be a “safe” space for artists.

And, well, that’s pretty much the end of Dark Mofo ain’t it? I mean, as a festival of transgression and edge. Perhaps that was only a matter of time.

There was always something bizarre about the festival’s wild success in the Apple Isle, whose public morality is split between Christianity and green-secularism.

As representatives of both clenched their teeth, Dark Mofo and MONA became major tourist drawcards and part of Tasmania’s global branding. Yet that drew the festival into a paradox.

Its identity and energy were drawn from a European avant-garde tradition of transgressing morality, at the same time as the progressive class and the cultural-producer elites have built new collective identities around the enforcement of ever more specific moral rules.

The confrontation was never going to come around Dark Mofo’s usually jejune attacks on western religion. Now they went and did something a little more interesting and it has all come apart.

You can see the point being made by the protestors about the in-your-faceness of Sierra’s work. It’s not a single event in a gallery you choose to go to, but widely disseminated by a festival; sort of Satan’s Moomba, now an arm of the state. It’s by a non-Indigenous artist, it’s kinda tiresome in its staginess, etc. But on the other hand, protesting artists — I mean, it’s all a little grimly funny. What is it that first alerted you to the “unsafe” qualities of a festival called “Dark Motherfucker”?

Was it the neon Satanic inverted crucifixes around town? The guy using the fresh remains of a slaughtered bull? Heh… The protest over “We want your blood” shows that the transgression of events like Dark Mofo has always been a packaged one, held within limits, which conformed to the secular-humanist values of the knowledge class.

Since these are now the dominant values of society — it’s been decades since they defeated a remnant religious-cultural order, what progressive value or statement could possibly be challenging or transgressive now? — Dark Mofo has had the challenge of declining energy for some time.

Recently, it added a “dangerous thought” mini festival. But since the dangerous thoughts of our time are all those adopted by the alt-right now (what if monocultures are better than multicultures? What if the triumph of gender over sex is a cultural disaster? What if war is necessary to the health of a society? What if global colonialism was a necessary precursor to full human liberation?) the progressive avant-garde’s claim to edge is permanently stymied.

“We want your blood” did have a bit of sizzle about it — whatever the artist tried to fix as the work’s meaning it had other, darker ones — but that’s not what Dark Mofo’s for. It’s for having a black vanilla ice cream, seeing a three-hour movie about sodomy and then going on a ferry ride. Kids get in free. It’s a theme park of a concluded artistic modernity.

Trouble is, so is the attitude deployed by the artists protesting the event. What the hell concern do artists have with MONA and Dark Mofo being “safe” — meaning not that loose scaffolding is secured but that nothing “traumatic” will be seen or heard? How can art even begin to work on this principle?

Both Walsh and Carmichael should have pushed back much harder against the implicit notion that there’s some sort of right to not encounter anything disturbing or upsetting. Art has to have a certain autonomy of creation and a right to come into being, as it were, as a necessary part of a wider right to free expression. How is it possible to defend someone’s right to call for Australia to “burn to the ground” at a rally and then apply collective censorship, on psychological “safety” grounds, to a piece of art?

The inevitable result will be that the “safety” motif is rolled over into political discourse to shut down protest. Such acts are the expression of grant-fed artistic networks which have become arms of the state, to produce a safe, authorised art of pseudo-dissent.

The eventual result is that artistic mediocrity, the production of a sameish avant-garde kitsch and disengagement as the pursuit of safety, and the avoidance of trauma become an ever-tightening circle. Such wars to shut down expression are acting as a substitute for real politics in any case.

Tasmania, after all, is the place where activist Michael Mansell started a sovereignty push with money part-provided by Colonel Gaddafi. How unsafe was that? The search for “safety” is nothing other than the consolidation of an elite order, to which a section of artistic elites have been admitted.

Those who want real change should have nothing to do with it. Art and politics and life are meant to have a bit of fate and chance about them.

Feeling around in the dark, Walsh finds more shocking art

An inadvertent icon: the making of MONA 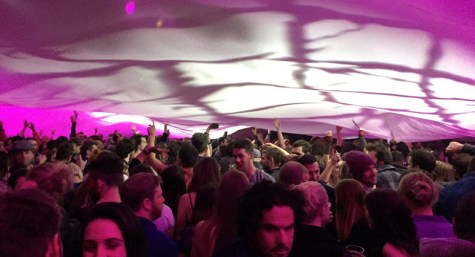 I often agree with you but I think you are precisely wrong here – flag aside, this piece of art involving an outsider taking indigenous people’s blood is the opposite of transgressive. After all, when we live on ground already soaked in blood, when there continue to be deaths in custody, when indigenous people die far younger than their white counterparts, what societal attitudes does this art transgress? Is it the fact that he asked rather than take it by force?

It seems to me to be more of a blunt support of the status quo – you could make a case for it that way as satire, but I wouldn’t support it – the larger point is, sadly like quite a lot of dark mofo and Mona, it’s the status quo dressed up to “shock” without much consideration.

Rundle, I entirely agree with your revulsion about the use of “safety” and the growing moral policing undertaken by the rising progressive/knowledge worker class – or as it was previously known, the bourgeioise (regardless of the left-wing origins of its cultural values). The idiocy of mindlessly promoting ‘safety’, the danger of it, as you suggest, is amply demonstrated by Priti Patel’s latest anti-protest bill in the UK which proposes to empower police to shut down protests which are too noisy, or disruptive or alarming. The State will always be able to enforce morality and safety more effectively than citizens, so being complicit in promoting this ideology is pretty moronic for anyone who wants to see meaningful change.
On the substance of this particular artwork, it is clearly an example of exactly the kind of colonialist oppression the artist takes upon themselves to criticise and it should not have got a guernsey in the first place on the basis of intellectual and artistic mediocrity and hypocrisy. However, supporting calls to ban it is a step too far I reckon – it should have been allowed to collapse under the weight of its own stupidity and absurdity and the artist encouraged to take their paternalistic European notions of liberation back to where they came from.

When I heard about this, I thought it would be the right wing outrage brigade that took exception to the “desecration” of a British flag. I’m gonna guess that the organisers did too, and that can be rode out because pompous stick up POM sympathisers aren’t the target audience for Dark Mofo, or for edgy art in general. Who was taken aback probably mattered most, just like all those on the left who are forced to apologise for remarks that other lefties didn’t like.

Meanwhile targeting the sacred cows on the right is a sport…

Happy for sacred cows to be targeted. It’s just not a sport for those who can’t take it when their own are targeted back.

I was hoping you’d do a piece on this Guy.

The protestors want this artwork to stand in for all of their anger at the ongoing colonisation and dispossession of aboriginal people over the last 230 years.

The problem is that protesting against some artwork isn’t going to achieve the desired outcomes; only a radical change in the way we do things will.

Fundamentally improving the material circumstances of aboriginal and Torres Strait islander people eg by massive investment in culturally relevant and appropriate housing in cities, regionally and remotely, properly funded community run services, making sure kids are connected to culture and grow up healthy.

But we don’t even seem to have the language to talk about this stuff at the moment.

I don’t care about this artwork, I care about the fact that we live in an outrageously rich country and still outcomes for aboriginal and Torres Strait islander Australians are despicably less than other Australians.

“Satan’s Moomba” made me lol

Got me too, priceless. Great piece GR.