Scott Morrison has been given many chances to prove he can be a leader. He’s said no every time

In the past he's avoided, spun, and blustered his way through controversies – but after this week, the Australian public are seeing through the PM's facade.

Scott Morrison is boxed into a corner on gender equality, and it will take a Houdini-like performance for him or his government to escape without serious damage.

Brittany Higgins and Chanel Contos, two strong and savvy young women, have managed to create a movement that just might — and certainly should — change the course of history.

The clue to that was in Monday’s marches. In Sydney and Brisbane and Canberra and elsewhere, people rallied against an inequality that has been ignored for too long, as well as a prime minister whose inaction is perpetuating it.

But it wasn’t just the number of protesters that signalled how this might play out at the ballot box; rather, it was the breadth of people who left their homes and offices and schools to make this protest count. 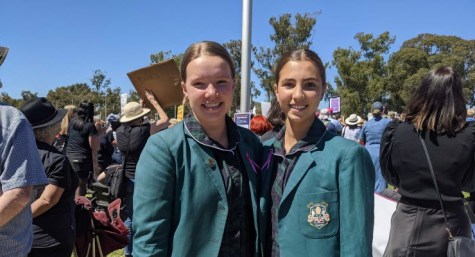 Women and men. Students in full school uniform, accompanied by teachers and school principals. The very young and the very old. Professionals and tradies. Those with daughters, and those with sons. Mothers and fathers and brothers and sisters. Liberals, as well as those who have never voted for Scott Morrison’s side of politics.

This wasn’t children at a climate change rally he could send back to school. And that’s why the prime minister should be wary of the rapidly-moving comet headed in his direction.

The impact of what is now unfolding in schools and workplaces and on our streets is magnified by the fact that this is an issue that requires nuance and leadership and consultation and respect.

He hasn’t been helped by a ministry of men and women whose actions and comments also seem to show a disconnect between those in power and those feeling powerless.

“Not far from here, such marches, even now, are being met with bullets, but not here in this country. This is a triumph of democracy when we see these things take place.”

That was the prime minister’s actual response to the hurt and anger of tens of thousands of Australians who braved sun and wind and rain to be heard.

Yesterday he was quick to claim that he had been “egregiously misrepresented’’, but that’s how it was read — and shows up how this issue has exposed his weakness as a leader.

Scott Morrison could act here. He could act like a prime minister.

He could find a new attorney-general. And he should. But he won’t.

He could find a new defence minister. And he should. But he won’t.

He could apologise to Brittany Higgins and Chanel Contos and the thousands of other young women who have been raped or sexually abused. And he should. But he won’t.

He could lead the charge against the victim-shaming that is being allowed to run as an unsavoury undercurrent in this debate. And he should. But he won’t.

He doesn’t know how to sack a non-performing minister.

And he doesn’t have the ability — despite his alleged expertise in marketing — to shut down the ignorant attacks on young women brave enough to put their hand up.

The everyman with cap routine won’t work this time. Indeed, it will cost him dearly. 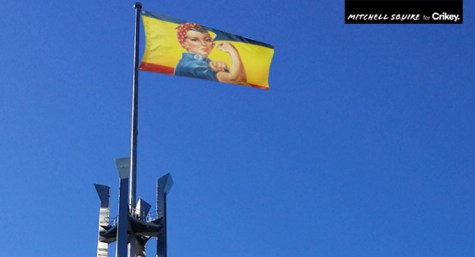 The Coalition has a problem with the female vote. But it doesn’t seem to mind

He’s set a new standard here. In response to women complaining about being raped and sexually harassed in the very building in which he works – the one he claims should “set the standard”, his response is to say that the mere fact that they’re not also being shot is “a triumph of democracy”.

How he can say he was “egregiously misrepresented” when his statement was made in Parliament and shown on TV where we could all see and hear his comment, I do not know.

One explanation is that $cottyFM doesn’t know the meaning of either “egregious” or “misrepresent” or maybe both. In the case of the former, it is quite possible, but it is not as regards the latter, given that Morrison has for years made both an art form and a living from industrial scale misrepresentation.

I hope you are right about it being a turning point and that things don’t just return to their corrupt and incompetent normal. Morrison still has a lot of support in the polls and I think his marketing captures a lot of appeal.

Sorry Madonna – I’m with JMNO on this. ScrotMo is a one trick pony. A man born in the late 1960’s but culturally and ethically anchored in the early 1900’s. He is never going to be able to plausibly demonstrate that he is a “How great is that!” man of this century – the smirk will always betray his inner opinions and beliefs.

As if he has stopped bullets at marches! I’m sure he’d love to use them!

That is exactly what I was thinking.

No matter how much you may wish for a lemon to be an orange, it will always be a lemon.
Morrison was never fit for the job. Ever.

Is it about Morrison doing his desperate Homer Simpson impersonation or is it really an executive out of control ? AC Grayling in his important book “The Good State” identifies a fatal flaw in our current Westminster styled/ ministerial responsibility based system of representative govt. No system is ideal Grayling argues, but past and current govts in countries like Australia, the UK, Canada and NZ – that are versions of, or based on the Westminster model – are really only partial democracies, or fall short of being fully functioning, legitimate democracies. He claims the actual lack of any real separation of powers between the legislature,the executive and the judiciary is the problem, which is mostly due to the domination by political duopolies or two party systems. For instance, the LNP and Labour, Republicans and Democrats, Tories and Labour, are real world, living examples of parties whose similarities are greater than their differences and share power in a seesaw of tenures in office. All of the above offer no actual alternatives to the status quo of their current economic power structures – they are primarily pro business with some secondary differences regarding the desired size and extent of social welfare services and social justice policies. For instance their tax systems are basically regressive, climate change legislation favours and protects the major carbon emission industries, high unemployment levels are maintained and designed to suppress wages, and social justice issues mostly ignored. But most worrying of all is when either of the above parties are in govt they control both the legislative (law making) and executive (law administration) processes and institutions and shape the judicial system. So apart from prioritising the interests of powerful economic lobby groups in legislation, the executive /the cabinet/ the parliamentary minority of ministers wield, discretionary, wide-ranging and unchecked power whilst in office. Whether it’s ignoring and/or covering up sexual assault and discrimination in the workplace, incarcerating a Sri Lankan refugee family on Christmas Island indefinitely, prosecuting a public servant and his lawyer for exposing the govt’s illegal bugging of the East Timorese Embassy for commercial advantage, implementing an illegal Centrelink debt recovery scheme with impunity, or allowing banks to access superfunds to increase home mortgage sales – surely there is a crucial need to address the effects of executive abuses of power if the causes can’t be.

Would proportional representation move things in the right direction? As well as a ban on donations and limits on lobbying?

Thank you that explains it clearly.