After running hard and uncompromisingly for an inquiry into allegations against Christian Porter, why on earth did Crikey publish such an unfair and inaccurate article?

For anyone following the battle in the news media and on social media over the fate of Attorney-General Christian Porter after serious rape allegations, an article in Friday’s Crikey was a punch in the gut.

Despite running hard in favour of the inquiry that all thinking people now agree is the only fair and reasonable way ahead, Crikey has been the target of angst by a range of women online who have questioned the factual accuracy and fairness of the article, written by David Hardaker, as well as the suitability of it being run at all.

All these critiques are fair.

Against a background of a public that has not been able to read the submission the woman prepared for police before she took her own life last year, it is particularly important for journalists engaging with the issues to get the facts right.

The article doesn’t. Hardaker characterises eye movement desensitisation and reprocessing (EMDR) therapy as fringe when its proven efficacy means it is funded by Medicare. The article suggests the woman undertook therapy to unearth repressed memories, when there is no convincing evidence that this was the case.

To the contrary. What we know is that she documented near contemporaneously in her diary evidence of the event.

This strongly suggest that her recollection of what happened was not a creation of a discredited therapeutic process, but the consequence of the typical and recognisable emotional journey undertaken by many survivors of childhood sexual assault: the increasing intrusion into the adult psyche of memories that have been compartmentalised and pushed to the back of the mind but — now that the person is ready to process them — can no longer be denied.

The intrusion of the fugue of past trauma into everyday life is not evidence of what the article calls dissociative identity disorder and in the old days was called multiple personality — a serious mental condition that is vanishingly rare — but of the early, painful and recognisable trajectory of someone taking their first steps towards processing, integrating and healing from emotional trauma.

But the biggest problem with Hardaker’s piece is the unanswerability of the question: why write it at all?

Some, myself included, may be willing to give the pale, stale and male brigade that dominates the major news organs in Australia a pass in regard to their visceral incomprehension of what it’s like to have sexual assault and/or sexual harassment ruin or seriously impede the upward trajectory of your life.

Why? Because we know that, lucky them, they’ve never had to experience it. But to say that is not to agree that their voices must be heard while the half of the nation who knows all too well what’s it’s like are trying to process what’s happened and reeling from shock. They don’t.

Australian women are enraged and grieving. Grieving for our own lost innocence and opportunities, and raging that such tragedies are being visited on our daughters while the men meant to lead us parade their indifference to our experience and refuse to do anything to stop it happening again.

In that context the only thing for men of goodwill to do — if they can’t say or do anything helpful — is to listen hard and try and empathise. And. Shut. The. Fuck. Up.

Dr Leslie Cannold is a philosopher, ethicist, writer and a sexual assault survivor and crisis counsellor. Her Both Sides Now column is a regular feature of Crikey every Friday. 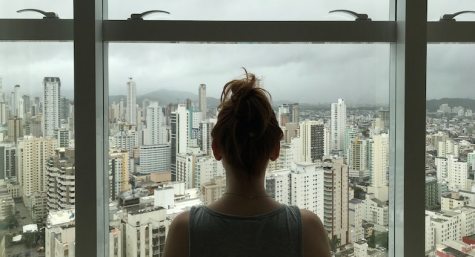 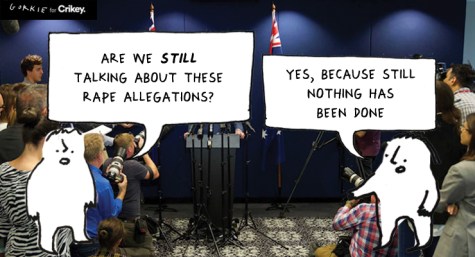 How screwed up is our politics and media? A dead woman’s treatment tells all

Where was the editorial review of Hardaker’s piece before it was published? Crikey failed.

There was clearly editorial review of Hardaker’s piece. Peter Fray’s explicit comment on the article at the time of publishing: “I commend these two very different articles today, the former [rule of law] by Bernard Keane, the latter [repressed memory therapy] by David Hardaker.” I’m pleased Crikey has apologised for the offending piece, but suggest it go further and not just provide the apology to its subscribers.

Yes he did the ol’ both sides but if one of those sides is factually incorrect it should not have been put. If there was a review (commending something can be done blindly without reviewing it – it’s not a lock) it failed.

Two very big IFs in your magisterial pontification.
Luck for the country that you have no power to enforce your prejudice against open enquiry, what was, once, known as investigative journalism.

Your constant repetition of inaccurate statements does not make them true.
At the risk of blaspheming again, evidence?

So which article do you deem factually incorrect? That Hardaker’s report struck nerves and indeed may have caused offense (shock-horror) does not, of necessity, mean it is offensive objectively-speaking. If I find an article to contain subject mater I find personally offensive that does not mean it is, by definition, also untrue.

Having apologised for the so-called “offending piece” potentially triggering certain subscribers however, I do not accept that Crikey should be compelled to issue a grovelling apology to the world at large.

And your evidence (please excuse such blasphemy) for that assertion?

repressed memory theory is:
-Not applicable in Kate’s circumstances since she made diary entries very close to the time of offence and told a therapist 8 years ago about the alleged rape
-Debunked

I’ve previously noted your inability to read well.
Failed comprehension in primary school, did you?

Crikey’s little catch-phrase for encouraging new subscribers is: “Innoculate yourself against the spin”. Such innoculation requires occasionally reading material which is challenging or you disagree in order not to be lost inside a bubble containing only articles and viewpoints that perfectly align with your own at all times…
This is the very essense of robust debate and starting/maintaining conversations about difficult subjects.

Crikey failed us badly. I left twitter when this first blew up because it was just too triggering. This sort of article by Hardcore makes me wonder if I should stop reading newspapers too because articles like this trigger too much trauma. Shame on Hardaker for thinking what he wrote is ok, & shame on Crikey for publishing his offensive rubbish.

Subjective reporting has been encouraged for over four decades Penny; a history in itself.

Take heart when the student socialist youth in the PRC described the protesters at the Capitol (6 Jan) as indoctrinated!

Thank you for this. David Hardaker’s article was embarrassingly flawed, incredibly hurtful to those who knew and loved the alleged victim, and – given that false memory syndrome has largely been discredited (at least one of its leading proponents turned out to be an actual abuser – one leader of the “false memory” campaign opposed child protection and gave an interview to a pro-paedophilia magazine saying that “hysteria” about child sexual abuse was partly the fault of radical feminists because women tend to be jealous of men bonding with other men and therefore would be jealous of “paedophilic” bonds) and there was n evidence of “regression” or recovered memory therapy here – full of unhelpful speculation.

Leslie, thank you so much. A brilliant perspective on exactly what was so brutally hard to process from that article.
I was extremely distressed by it so a ‘punch in the gut’ is the absolutely perfect description.
I almost cancelled my subscription because I couldn’t process what felt like such a betrayal and I just wanted it to stop. I read no Crikey articles over the weekend and I am glad that this article was one of the first that I read today.
Bravo Leslie!

I was perplexed by the Hardaker article, but still basically convinced her story is true, whilst having zero regard for the honesty or ethics of Porter for a whole range of reasons.
I wonder if the family will be prepared to allow the whole dossier to be released for publication if Morrison refuses to call the vital judicial enquiry?
This case really is a turning point for political behaviour, and a sweeping victory for justice and change would be a wonderful legacy for her family and friends and an inspiration for renewed courage for so many other victims.